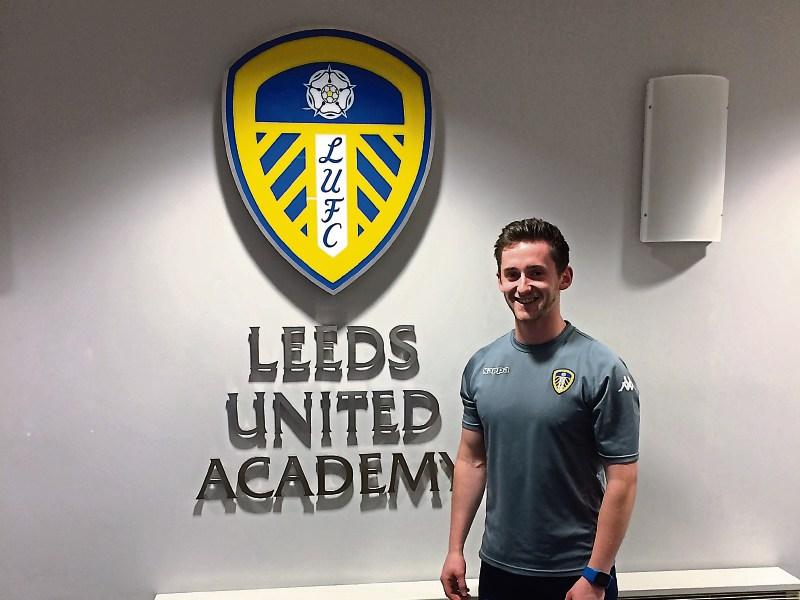 A Newtownforbes man has told of how a chance meeting with fitness coaches aligned to Leeds Utd resulted in the offer of a “dream job” with the Sky Bet Championship side.

Like every footballing enthusiast, George Bell had often wondered what it would be like rubbing shoulders with the cream of English soccer.

Thanks to an impromptu conversation with strength and conditioning instructors from the Yorkshire-based outfit towards the latter end of last year, the affable 25-year-old has realised that goal by landing a job as a sports scientist with its U18 side.

“At the time I was working with a youth team in Dublin run by the FAI and Fingal County Council when Leeds Utd were doing some pre-season training in Abbotstown,” said George.

“When they were here I got on to their strength and conditioning coach and different people at the club and was invited over (to Leeds).”

During the course of his short stay, George learned that the three-time First Division title winners were on the lookout for a sports scientist to work with their U18 side.

Within a matter of days, and having sailed through his interview, George was offered the chance to take up full time employment with the 2001 Champions League semi-finalists.

“I started on January 3, but it feels like I have been here a few months already,” added an exuberant-sounding George.

Since taking up his new role, the former Carlow IT student has been involved in tightly fought encounters against Hull City and Crewe Alexandra.

“In the first game (against Hull) we lost 2-1 and against Crewe last weekend we drew 2-2, but to be honest the U18s are not about winning. It’s about bringing on and developing players to play in the first team.”

His proud parents, Archie and Elizabeth, are deeply-respected members in the Newtownforbes community, courtesy of the family-run Bell’s Foodstore in the village.

And despite accepting he is still very much coming to terms with his new surroundings, George’s amiable persona already appears to be going down well with those under his stewardship.

“We were having a training session the other day and I just came in and said to them all ‘Top of the morning to ye’,” George quipped.

“The lads got a great laugh out of it, but now they think every Irish person says that!”