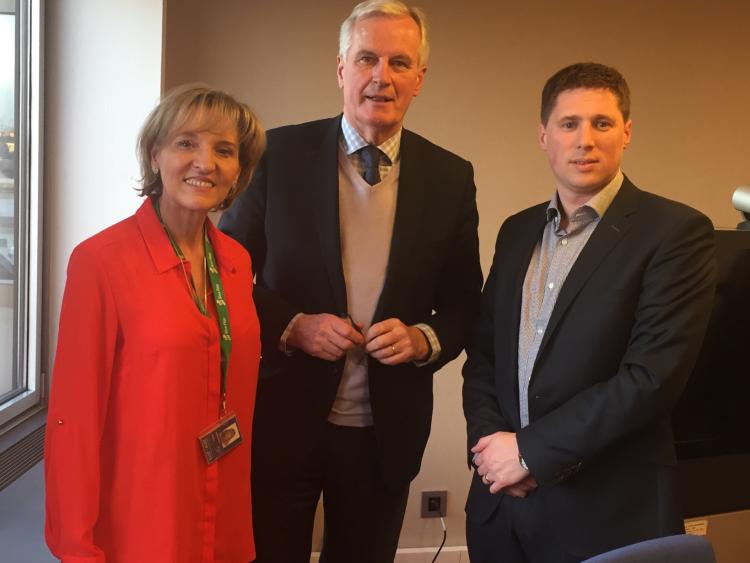 Sinn Féin MEP Matt Carthy met with the EU’s chief negotiator on Brexit, Michel Barnier, on Tuesday. Carthy joined his Sinn Féin colleagues Martina Anderson and Liadh Ní Riada and other Irish MEPs at the engagement in Strasbourg which was organised by Fine Gael’s Sean Kelly.

“Our meeting with Michel Barnier, the EU chief negotiator on Brexit, was both constructive and informative. It was particularly timely being on the same day as the keynote speech of British Prime Minister Theresa May in which she confirmed that her Government is planning for a ‘hard Brexit’.

“Sinn Féin MEPs impressed upon Mr Barnier the grave implications Brexit holds for Ireland, and in particular the challenges faced by the North of Ireland being dragged out of the EU against the democratically expressed wishes of the people there.

“I made the case forcibly for the North to have special designated status within the EU as a democratic imperative, and the importance of a transitional EU deal for Ireland, in advance of Brexit to protect the interests of Irish citizens and businesses, particularly in the border region.

"The people of the north are entitled, under international law as a result of the Good Friday agreement, to Irish citizenship. That makes them de facto EU citizens. Consequently the EU has a responsibility to protect the rights of its citizens who risk being dragged out of the European Union against their own democratically expressed wishes.

“If Ireland is to mitigate the inevitable uncertainty following Theresa May’s speech - uncertainty​ which will adversely affect Irish exporters​,​ the agriculture ​sector​ ​and farmers - the Irish Government needs to press for​ a transitional agreement.

“It is clear from this discussion and from other engagements with EU officials that they will only pursue the strategy we require if they are pressed to do so by the Irish government.

"Therefore I would urge the Taoiseach and his Government to pursue this objective with the urgency it requires in order to protect the best interests of Irish citizens and businesses.”