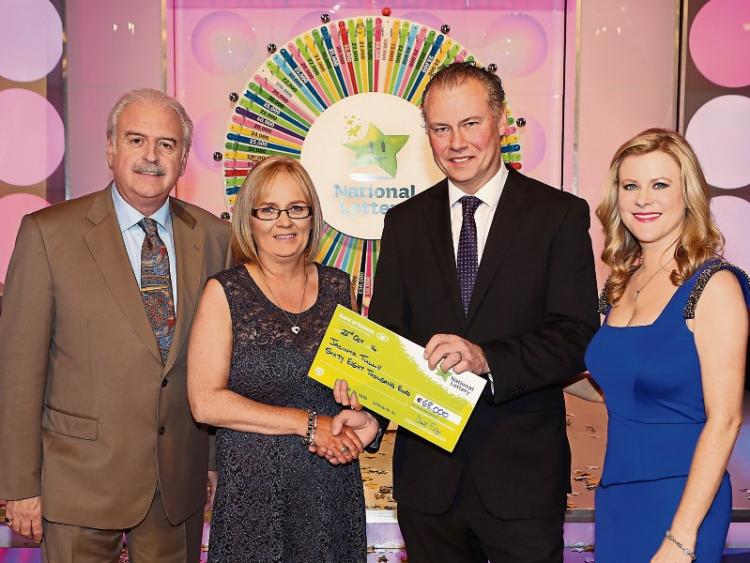 Jacinta Tully, Rathcor, Granard, Co Longford was watching television on Saturday, October 15 with her ten-year-old daughter Ciara, her mother, Mary and her brother, Philip when she was listed as a competitor for last Saturday’s show.

The winning three-star ticket, which saw her selected for the show, was purchased from Ard Services, Topaz House, Beech Hill, Clonskeagh, Dublin.

One of eleven children, Jacinta, who works as a Health Care Assistant in St Joseph’s Care Centre in Longford town, has six brothers and four sisters.

There was great excitement in the household when Jacinta was chosen to take part in the game show, hosted by Marty Whelan and Nuala Carey, and her sister Maura even travelled home from the UK to join in the fun in the days leading up to the programme.

Five players in total took part on Saturday night, hailing from Longford, Dublin, Cavan, Offaly and Westmeath. They collectively won prizes to the value of €183,000, but it was Jacinta who emerged the biggest winner on the night, winning prizes to the value of €68,000. This will no doubt help her realise her wish to replace her ten-year-old car!

Next week, it’s hoped that Longford's Lotto luck will continue, when Ballymahon native Jack Moughty, who was chosen to appear on the show's Saturday October 29 edition, tries his hand at the programme.

Winning Streak is broadcast on Saturday evenings on RTÉ One.