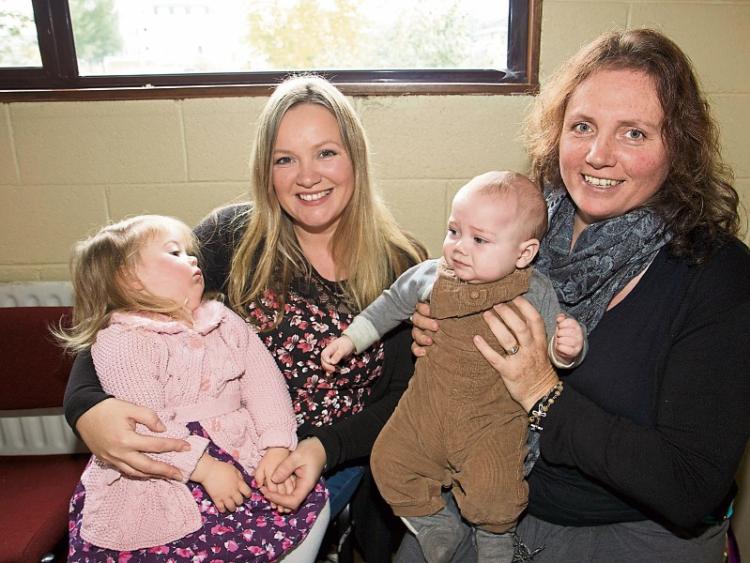 This is the third year of the theme ‘Every Breastfeed Makes a Difference’ and the National Breastfeeding Week aims to send out the message that every time a mother breastfeeds she is doing something good for her baby’s health.

It also focuses on encouraging mothers to breastfeed for as long as possible.

The local group meets on the first Wednesday of every month in a private room at Longford County Library and each year members reach out to an average of 100 mothers from Longford and the surrounding areas.

They come in and chat to other mothers about breastfeeding and get support and advice and are afforded the opportunity to just chat about anything that they want to address themselves.

“Breastfeeding is normal and that is what we are trying to put across in our group,” said Ms Nulty who is from Ballinalee.

“It is the normal thing to do for your baby.”

And despite decades of research by formula companies, science still cannot replicate the wonders of breast milk.

Breastfeeding is regarded as the ideal start for a baby because the goodness that comes from breastfeeding lasts a lifetime.

“Breast milk gives your baby all the food and drink they need for the first six months of life, and continues to be an important part of their diet, as other foods are given, for up to two years of age and beyond.” continued Ms Nulty.

“Every single drop of breast milk is good for your baby’s health, and the longer you breastfeed for, the greater the health protection for both the mother and her baby.”

She says that more and more mothers in Ireland are breastfeeding their babies and while breastfeeding is the most natural way to feed the baby, it is a skill that mothers and babies  develop over the first days and weeks.

“With the right help, support and information most mothers can start breastfeeding and continue for as long as they want to,” added Ms Nulty who continues to breastfeed her 18-month-old daughter.

The pressures of combining work life with motherhood can have a negative impact on breastfeeding, however Ms Nulty says that it is still very “doable”.

“I work myself,” she told the Leader last week.

“I’m still feeding  an 18-month-old; it isn’t easy and you do need good support.

“Support is key and that is probably one of the things that is missing for mothers these days - support.”

Support she says, starts at the very beginning; at the hospital, from  nurses, from doctors and then from husbands and partners and extended family members.

“Women need to be supported and encouraged to feed their babies; it’s about giving them the confidence to keep going even in the tough times,” she smiled, before pointing out that it is said that mothers should never give up on a bad day!

“The bad times are the hardest part to get through, but if you can get through that it makes you stronger and more confident in what you are doing.

Caroline Lewis from Edgeworthstown is the co-leader of Longford Breastfeeding Support Group.

She says there is a big push on now to prevent childhood obesity by the Government and breastfeeding provides babies with proteins that remain in their bodies for the rest of their lives.

“This,” she added, “is something that can counteract obesity and childhood illnesses”.

She also spoke about the difficulties for mothers when breastfeeding doesn’t work out.

“If breastfeeding doesn’t work out for mothers and they resort to formula feeding, they are made to feel guilty about that,” she added.

“Really at that point there is a lack of support there for mothers and they feel angered and let down by that.

Meanwhile, Ms Nulty pointed to the benefits of attending a group such as hers, even while pregnant.

“Women who are pregnant should come to a group like ours so that they can see for themselves the support structures that are in place,” she added.

“It gives you time to come to terms with what is expected of you as a mother; I went to a group in Mullingar when I was eight months pregnant and while it was daunting at first, it became a really great support for me.

“By the time my baby came I was prepared and I knew what was going to happen; I knew it would be normal and tough for the first few weeks and that I would get through it.”

She added,  “That was all in my mind by the time I had my baby, so that was good. But unfortunately there are mothers and their babies and they have had no contact with other mothers or support groups and they find breastfeeding very difficult.”

The mother-of-three said women often give up at that point because they feel that what is happening to them is not normal.

The local leaders also pointed out that many breastfeeding women compare themselves to formula fed babies and this is not a positive thing to do.

“Sleeping patterns, eating patterns and growing are all compared and there is nothing comparable with the two - formula fed and breastfeeding are two completely separate entities,” said Ms Lewis.

“Every child is individual and different and when you come to a support group you get that because there are mothers who have been there before you and they know.

“They are able to share that knowledge and that is very valuable.

“In fact at a support group like ours, you are able to learn the solutions to problems before you get to them.”