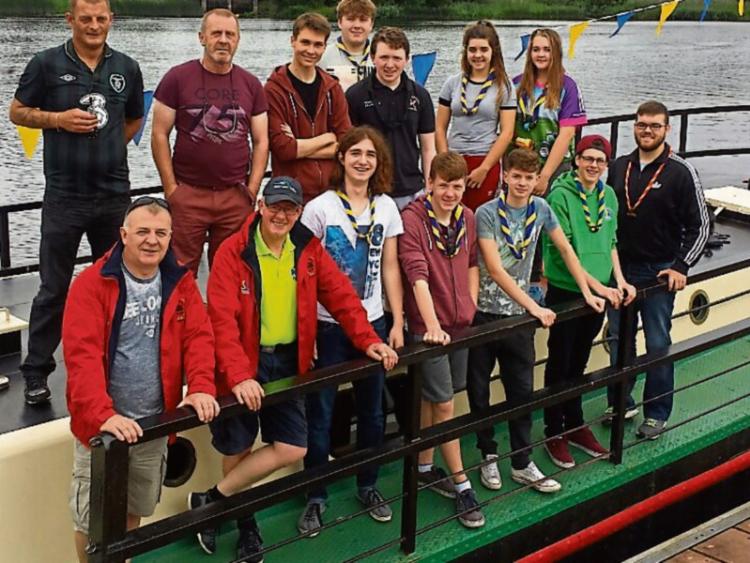 The 12th Roscommon Scout Troop 'Ballyboro' Scouts have made history, by becoming the first Scouting Troop in Ireland and the UK to be the custodians of a 'Heritage Barge'.

The troop, a unit within the Lough Keel Scout County which also includes Ardagh, Longford, Kilglass, Ballinamore, Boyle, Mohill and Carrick-on-Shannon, was formed just over 12 years ago in Lanesboro/Ballyleague to cater for children with an interest in outdoor acitivities.

Since then, it has flourished, with over 100 youth members, male and female, now taking part from the ages of 6 to 23.

Water activities form a major part of the troop's programme, and the members are a familiar sight on the River Shannon, where they can be seen kayaking, canoeing or sailing their fleet of Laser Picos on the inner lake. Members of the troop have also participated in the Scouts Liffey Descent and Paddlefest and some even offer their services as safety canoeists on triathlons and swims throughout the region.

The Heritage Barge, then, was the next step for the troop, who enjoyed the boat's maiden voyage from Lanesboro to Richmond Harbour in Clondra to participate in the recent Heritage Week celebrations.

Giving a brief history of  the boat, Group Leader Liam Kelly explained; “The Barge, which measures over 62’ long and weighs approximately 50 tonnes, was constructed in 1937 in McMullan's Dockyard in Dublin and was bought by Thomas Hughes & Sons from Athy for the princely sum of £1,200.

“This Barge, the 113B, was used for conveying goods to and from Dublin along the Grand Canal and River Barrow as far as New Ross in Co Wexford.”

According to Liam, with the canals no longer being used for commercial transport, a great number of barges were laid up in the late 1950s, and the troop's Fox-113B was purchased by CIE and converted into a maintenance barge that serviced the waterways structure from Lanesboro as far north as Lough Allen, Co Leitrim until its decommissioning a number of years ago.

The Fox-113B was then tied up at the Waterways Depot in Rooskey for a number of years, becoming a familiar sight to passing motorists until it caught the eye of some of the Ballyboro Scout Leaders.

“A number of years previously, members of the Scout Troop had grasped at the opportunity of travelling from Lanesboro to Portrunny on a number of Heritage Barges that stopped off in the Shannonside Town as part of their annual rally,” continued Assistant Group Leader and Quartermaster Tom Gill.

“The seed that was sown from this unique trip on the Shannon and the sighting of the Fox – 113B in Rooskey spurred on negotiations with Waterways Ireland and a licence agreement was entered into with Scouting Ireland for the transfer of the Barge from Rooskey to its new home.”

After carrying out a detailed Marine Survey and ensuring that the appropriate insurance was put in place, the barge was towed up to Hanly's Marina in Ballyleague for major refurbishment works.

“A team of dedicated Scouters started on the mammoth task of refurbishing the barge, which would eventually be used by Scouts and Guides as a mothership on the navigable rivers and canals both North and South of the Country,” Tom revealed, adding that funding for the project had been secured from the Irish Heritage Council and the Department of Transport, Tourism and Sport.

Giving an insight into just some of the work that had to be done, Tom said; “As the barge was previously a working maintenance vessel, modifications that were previously done on the barge had to be undone, with the removal of the crane supports, and the total gutting out of the barge due to water contamination on most of the internal timberwork and furnishings.

“The centre section of the barge had previously been used as a holding area and workshop and this had to be totally re-roofed in 5mm steel plate and 6 old portholes were installed on the new section to blend in with the remaining structure.

“The wheelhouse had to be extended to suit our further needs and an extensive programme of re-glazing,  engine and gearbox overhaul, insulation, internal flooring and retimbering of the internal roof and walls, rewiring for 24vDC, 12vDC and 220AC had to be undertaken for shore power and the installation and commissioning of an 8kva marine diesel generator, fire and smoke detection, emergency exit, toilet facilities to an internal holding tank, paint removal and repainting of the whole structure was undertaken.”

Owing to the reconfiguration of the barge, over 14 tonnes of 6” blocks had to be physically lifted on to, and placed into the barge as ballast by hand, but all the hard work was worth it, as the barge is already being factored into the troop's plans for the coming months and years.

“Plans are already underway to participate in the 200th anniversary of the Royal Canal’s use commercially next year as well as a trip to the Scouts International  Centre in Castle Saunderson, Belturbert,” Liam confirmed, before concluding; “Waterways Ireland are undertaking work at present on the River Finn which will allow us and other vessels to reach same through the Shannon Erne Waterway upon completion.”