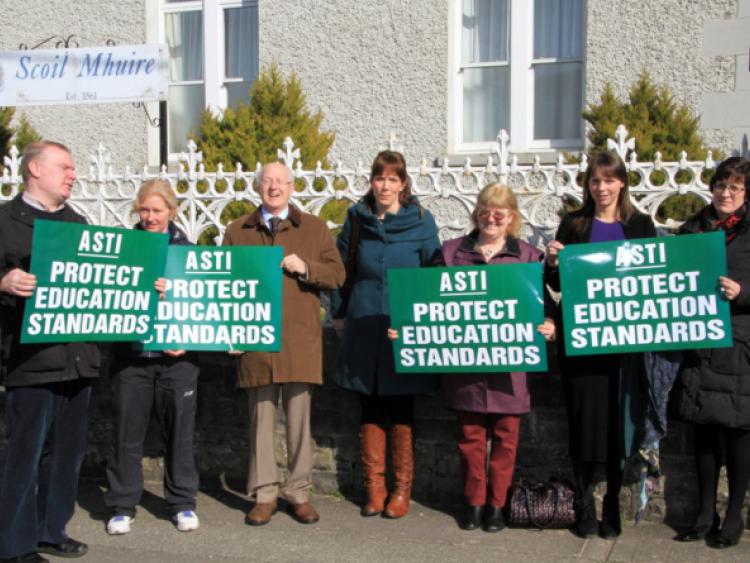 Imagine if you have children at a school.

Imagine if you have children at a school.

Where, despite the best attempts by officialdom to erode all signs of emotional attachment, the fact remains that in Ireland teachers have a certain natural inclination to encourage, be kind to, and be caring about those pupils who are within their purview.

Some of course, the small minority who exist in every walk of life, don’t care at all, but we’ll leave those aside, for now.

Into this mix, we are now attempting to introduce a new way of marking state exams - by the teachers!

This poses a very acute problem for those in whose care pupils are educated. The fact remains that teachers in schools generally are good people, have sincere and caring concerns for their pupils, and treasure the relationship that is virtually sacrosanct between teacher and pupil. One would think it should be encouraged, in the present society of carefree devil may care, to find a profession which truly cares.

Instead, in an oddly convoluted mindset, it’s extraordinary that the recognised importance of that relationship is not sufficient in itself, to convince the Department of Education that it really matters, whether or not the teachers mark the papers of pupils, in serious exams.

The fact is, in order to preserve objectivity the teachers do not wish to be given responsibility for marking exam papers. They have repeated this many times.

It matters, a great deal, and I really think more careful consideration should be devoted to the way of educating the growing population.

The marking of papers for state exams, should not be subject to negotiation.

Someone should remind the administrators that being economically viable is one thing, but retaining our sense of reality, and preserving the character profile between pupil and teacher, is another altogether more pressing and vital issue.

Postcode for every single house is crazy stuff

Increasingly, I feel that we have become very exercised of late - indeed preoccupied - by the modern tendency to become ever more cooler, more hip, more fashionable, more in tune with the tastes and textures of the great global world.

In an odd aberration of realism, we have become very busy portraying ourselves in a way that reflects how we think we should be seen, rather than concentrating our attention on the greatness of being individualistic, and interesting.

We constantly try to act like a nation of several million people with an active vibrant economy, and massive output.

It’s time for some of our mind shapers to pause and think carefully.

The reality is, that what we have in the first place, will be forever lost unless we take stock.

We need to realise the significant value that the world envies and continually seeks to replicate whilst we still can, and before it’s too late.

There are more people in the borough of London, than there are in the entire country of Ireland. Makes you think, that.

Istanbul alone, for example, is vastly bigger than Ireland.

Ireland is populated by 4.5 million people. That’s Ireland, in its entirety.

London alone is roughly 9 million, and this is only 12.5% of the UK population.

Tokyo, in China is 37 million, Delhi in India is 22 million, and New York is 20 million - and these are just a few of the main cities.

There are many interesting examples of population globally, and the most interesting aspect is how tiny Ireland really is. In the scale of things, we merit a very meagre mention.

Virtually a dot on the map.

Despite that, and in contravention of the expected, we defy our limited size and have huge impact on the affairs of the world and have had for several years.

The fact is, small countries are usually not as important, or naturally gifted with the benefits or attitude that comes with being big. Yet, our country - Ireland - is probably one of the most envied and respected in the world.

This is not because of the size of our GNP, or the scale of national output. It’s a far more elusive thing which we have. We should - and must - be proud of that fact.

So when someone stands in New York and declares that Ireland is the best small country in the world to do business, they are merely furthering the self delusion that we are, in the real sense, ‘players’. We are not. We’re an amazing little country, absolutely yes.

But we should address the reality of where we are located on the global scale of things. We cannot afford many of the things we are setting out to do, including, but not limited to, the latest mad idea which is a postcode, for every single house in Ireland. Crazy stuff.

Nobody in their right mind would even dream of such infrastructure when in reality, we don’t require, or aren’t even close to, the density of population to justify such stuff.

A laugh that Irish Water bonuses are at risk

Generally one tries to avoid boring the reader by quoting statistics.

Somehow, however, there is no reasonably effective way of making the point otherwise. I recently learned that Irish Water chiefs may not get bonuses for overseeing the outsourcing of its call centre, and it’s meter installation programme.Soon after this, the Government decided that Irish Water would not receive bonuses. It remains to be seen what will happen. One would have thought, given the scale of remuneration available, that they’d do such work as part of their brief. They’re paid well.

These are the actual figures, outlined in a recent letter from John Tierney, the Head Honcho of Irish Water. Suggesting that since the bonuses are ‘at risk’ (his words), they might not be paid. That’s a laugh. They may now be deferred, because of people power, but they will, eventually, be paid. In fact, in simple terms, one third of the staff will be entitled to ‘bonuses’ of 14%, while 30 senior staff actually earn in excess of €100,000.

We’ve been a long time citing Greece and such places as examples of protests.And now we find out they underestimated the amount of installing water meters.