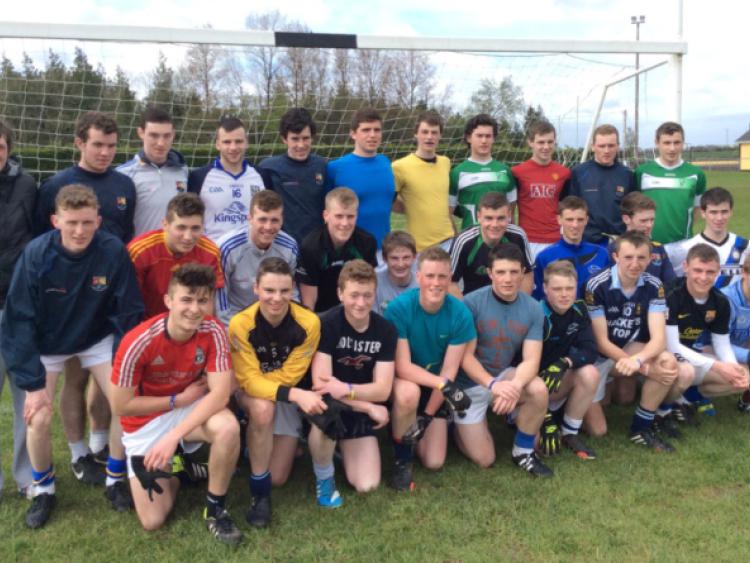 When, in the Easter Saturday game against Dublin, one of the Longford minors walked out the field with his hands clasped across his head, panting, the body language said it all.

When, in the Easter Saturday game against Dublin, one of the Longford minors walked out the field with his hands clasped across his head, panting, the body language said it all.

In the heat of brilliant sunshine that hotly illuminated Pearse Park, Longford were, metaphorically and literally, “feeling the heat”.

Playing against the best resourced, most expensively prepared, professionally facilitated, and meticulously accommodated minor county side in Ireland, this game was a shining example to anyone who could set aside the incomparable repertoire of negatives we tend to carry around at the ready, that we were seeing in front of us a team of our own with exceptional talent and ability.

For any minor team to compete man for man with the country’s richest county in terms of player population and finance, is an enormous measure of self-achievement in itself.

That Longford could have won, on the day, must be seen as an exciting barometer.

In the ever harsher realities that govern how teams are prepared, it is not now an equal contest.

Nothing new in that; if we go back 50 years Kerry had a dedicated team manager long before the term gained a foothold in Gaelic games. Little wonder Kerry won countless All-Ireland titles. Apart from the county’s natural talent and the mental reservoir of self-belief that imbues successful minds, they had the progressive and canny mindset of the Southerner. And like Kerrymen always, never felt inclined to share or boast about their training ways and habits. The insecure invariably want the world to know how advanced they are, in pursuit of affirmation, whereas, the Kerryman is never insecure; he’s quite anxious to confess how far behind they are and then go away chuckling mischievously.

When a county with Dublin’s budget and mindset travel by bus away from home, every detail of their excursion is subjected to forensic examination.

Consideration and attention is given to the spacing of seats, the comfort rating of the suspension, the quality of air, and probably - I suspect but do not know - the colour of the interior.

Colour has a dynamic bearing on how the mind adjusts, reacts, and the nerve centre systems that affect and trigger our subconscious between agitation, stress, and calm.

All these aspects matter.

I recall some years back, when my own preoccupation with upgrading player care and comfort became the source of a few in-the-know jokes. Some were perplexed that I’d have such far fetched notions as to be seeking more space between seat rows on a bus for players. “where is that mans head at; he’s mad, etc”. Bemusing, at the time.

That was several years ago. Sin sceal eile.

It is not without reason that professionals around a team forensically consider every possible aspect so as to treat players in a way that enhances experience, elevating their view of themselves, by providing travel environment atmospherics most conducive to arriving rested, cool, calm and serene.

The point being, a team like Dublin are afforded every conceivable edge of advantage in the pursuit of each single game.

I have long believed the buses used to move Gaelic footballers who’ve trained, planned, sacrificed and calibrated towards peaking at championship time, are generally a contradiction in terms.

All over Ireland, players are subjected to two and four hour journeys in vehicles whilst luxuriously fitted out for normal people going on normal journeys, are hardly best for the elite football minority who don inter-county jerseys. For a county player, every game trip is underscored by the stress and tension that’s part and parcel of an imminent attritional mental battle.

Now, yet again in the space of only a few years, Longford has a minor panel which is being meticulously well prepared, organised, coached, and psychologically moulded.

Gareth Johnson and his management team are to be applauded for tenacious pursuit of excellence and refusal to accept mediocrity in every aspect of what they do.

Acceptance of mediocrity is not always dictated by budgetary considerations; often it is dictated by mindset of officialdom, not the managers’.

And no, I’m not talking about our current county board.

Historically some officials instinctively resisted new ways, effectively declining to authorise or support the minutiae of small steps that might cumulatively become one giant leap. To achieve new breakthrough levels, the traditional internalised mindset must be discarded.

Throw off the psychological shackles of self-limitation, ignore the begrudgers. Embrace youth.

At this point in young lives, we have players whose minds are open to positivity.

Meriting complete support in every way, with carefully planned follow through beyond this one season, whatever way the year ends.

Longford lost by only three points to a powerful, talented, self-confident, team, with unlimited budget.

That performance by this current, newest group, bodes well.

On Shannonside Radio late Friday night last, it was startling to hear Paul Williams, on the Joe Finnegan Show replay, naming Drumlish and Edgeworthstown, among others, as the residential location of known crime bosses.

Criminals are now moving into country areas. A new and deliberate infiltration of rural society. Acquiring property with money accumulated from crime. A steady movement of crime bosses to areas now stripped bare of Garda stations and personnel. Rural Ireland will rue the day local guards were forced to lock station doors for the last time.

Foolishly divided local councillors all over Ireland, largely subservient to respective party masters rather than taking a unified power stance, have by their relative silence indicated this is okay.

Sometimes, silence is the loudest speech of all.

The removal of policing from rural communities will prove in time to be the most damaging and socially altering decision ever made by Irish political civil servants.

Local politicians effectively accept this erosion of protection without a murmur - in relative terms. Silence is acquiescence. Those who stay silent while wrong is done under the guise of economics, are themselves complicit.

If all the councillors in Ireland had mobilised en masse, disregarding stupid party allegiance, would the arbitrary closure of Garda stations have been so easy? Becoming a local county council representative is a noble calling.

Regrettably, its nobility has been steadily diluted, eroded and bullied into silence by the party machines. Local representatives are taught to stay quiet, even while rural Ireland is being dismantled under their noses.

The message from the party machine is always clear - a local councillor who wants to progress needs to remember who’s putting them there in first place.

The salient point exactly; we are.