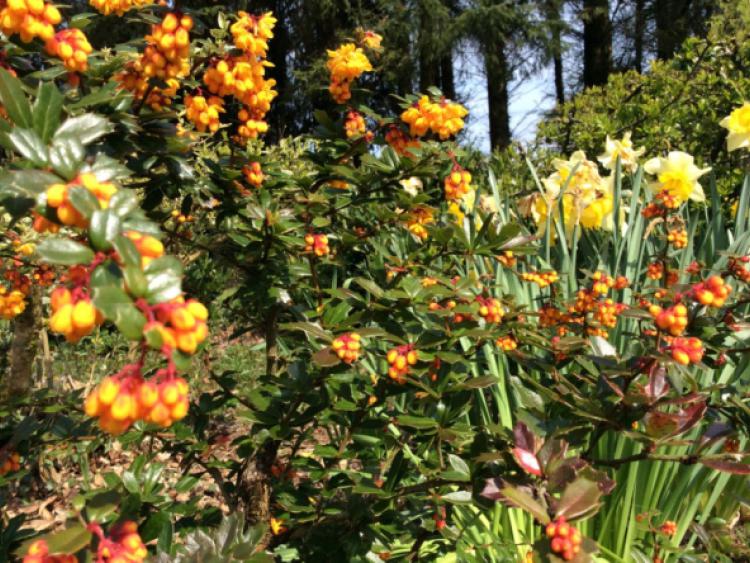 Whether you believe that life on earth is the end, or that there is another existence after death, the renewal of ground growth around Easter time is indisputable.

Whether you believe that life on earth is the end, or that there is another existence after death, the renewal of ground growth around Easter time is indisputable.

In the accompanying photo, the steady speed of rebirth with which the flowers and the shrubs broke ground, budded, grew and flourished since January is amazing.

The photo was taken Easter Sunday, in the garden.

In a month from now, the shrub will have begun the summer cycle, more fire like bursts of colour will flash. Meanwhile, the first daffodils have already begun wilting, losing brilliance, and in some unsheltered areas fallen to the ground. Others will retain vibrant splendour for several weeks.

All around the garden is a steady movement of plant life too slow to be discernible to the human eye. It takes place all around us, year after year. I never cease to marvel at the beauty of it all, and never take it for granted. The most innocuous shrub, or flower is a thing of marvellous complexity.

The delicately microscopic symmetry of the fire flash colours of the plant on left of the photo, astounds the eye if viewed close up with a magnifier. It certainly astounds this eye.

Picasso was a genius, his use of colour, though not always pleasant, was invariably stunning.

His art however, comes not even close to the creations we can see right outside our door.

Creations some of which disappear, wither and die every winter, only to burst to life the following season. Others simply lose foliage, close down their growth and sleep through the storms, frost snow, wind and anything else Mother Earth throws at them, only to reawaken and renew every March/April with the reliability of the morning sun.

Some pay 2 million dollars for a house by the sea or lake in Connemara, because they long for some perceived ownership of the beauty. Given that others pay 20 million for a single painting, the house is a far more existentially valid purchase.

The painting is a fixed view, forever frozen in time.

A few plants, flowers and shrubs in the garden, on the other hand provide an ever altering, changing, and mystifying cycle of beauty, scents, and perfumes through every year of our lives.

Whoever coined the phrase, take time to smell the flowers, got it right.

We should all take time to ‘smell the flowers, see the roses bloom’.

Fr Molloy case must be re-opened

In the recent rush to set up an enquiry in respect of various matters of national concern following the departure of Garda Commissioner Martin Callinan, an intriguing occurrence took place.

At a meeting of the Oireachtas Justice Committee, convened to hear the views of Garda Commissioner Martin Callinan on all aspects of crime, TD Finian McGrath sought to raise the case of Fr Niall Molloy. He was ruled out of order by chair David Stanton (FG TD Cork East). The committee then went into closed session excluding media, Gardaí and public.

A short time later, McGrath was seen storming out and the committee went back to interviewing Martin Callinan.

The Fr Molloy case is one that has remained a source of great anguish and pain to the family of the priest who died in Kilcoursey House, Clara, Co Offaly, in July 1985.

Despite repeated appeals from numerous activists and interested parties, including solicitors acting on behalf of the family of Fr Molloy, no government has agreed to reopen the case in any sincerely significant fashion,

It is not for lack of publicly recorded commentary.

“The murder of Reverend Niall Molloy has been raised consistently in recent times, including evidence that there was a total stitch-up of that investigation. Those and other issues need to be examined. We have to find a proper structure for examining them in public, unlike the commission of investigation legislation which is largely in private. Those who have been affected by these malpractices within the Garda Siochana must also be represented.”

Joe Higgins was by no means the first to raise this issue.

According to records which are publicly available, a much more qualified, and highly respected legal mind asked the following powerfully crafted questions in a Dail debate on the matter back in November 2010 :

“Could the Minister indicate to the House when the meetings that are to take place as arranged through the Garda Commissioner will occur?

“Does the Minister agree that the recent revelations are disturbing and indicate the possibility that the integrity of the investigation into the death of Fr Molloy was compromised, and second, that serious question marks arise about the manner in which the matter was dealt with at trial in the context of the judge directing that the charges be dismissed on the possibility that Fr Molloy died as a result of a heart attack in the context of the Coroner’s Court report establishing that he died as a consequence of a vicious assault?

“In addition to interviewing those from whom representations have been received and additional information furnished, will the Minister ask the Garda Commissioner to examine the manner in which the original investigation was conducted because there are now substantial concerns that crucial evidence was not taken account of, and in at least one instance was not made available in the context of any prosecution that did take place?”

These questions are attributed on record to Alan Shatter (Dublin South, Fine Gael).

For years now, chatterers on the street have been freely naming a public representative present on the night the priest died, and openly naming an alleged perpetrator of the crime, as well.

It’s a matter of public record that several hours elapsed before the incident was reported.

What happened during those hours? Something unsettling, considering bloodstains at the scene.

More recently Alan Shatter, now Justice Minister, was asked to clarify if phone calls to Gardai relating to the unsolved murder of Fr Niall Molloy in 1985 were recorded.

It is baffling that nothing substantive has been done to re-examine this awful case, which resulted in the death of that poor man, Fr Niall Molloy.

In a climate where we’ve been repeatedly assured that all bad eggs, and all rotten apples would be rooted out with transparency it is extremely disturbing that a matter of such grave importance remains unresolved.

Apparently bad eggs and rotten apples are more palatable and malleable than a hot potato?