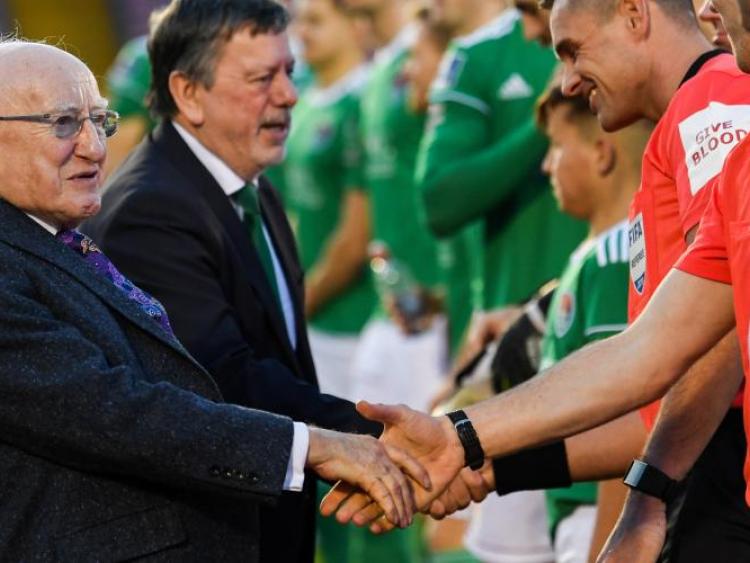 President Michael D Higgins has thanked the players, staff, supporters and the volunteers for the continuation of the League of Ireland through the COVID-19 pandemic ahead of the President's Cup Final tonight.

In a letter addressed to the League of Ireland community on the eve of the first match of the Irish domestic calendar between Shamrock Rovers and Dundalk on Friday, the President spoke of the importance of the League in the community.

Shamrock Rovers welcome Dundalk to Tallaght Stadium on Friday, March 12, with kick-off at 7.45pm, for the showpiece event, live and FREE on www.watchloi.ie

A fixture the President would usually attend, President Michael D Higgins will be watching from Áras an Uachtaráin with his WATCHLOI subscription ready for the start of the 2021 season.

The curtain-raiser for the domestic campaign, the SSE Airtricity Premier Division Champions Shamrock Rovers face FAI Cup winners Dundalk. Rovers will be looking to avenge their 4-2 extra-time defeat in the FAI Cup final at the Aviva Stadium in December against the Lilywhites before the start of the Premier Division season on Friday, March 19.

The President wished all sides the best of luck for the upcoming season and thanked supporters for continuing their support virtually.

The letter from President Michael D Higgins in full reads:

As a new League of Ireland season begins, it will do so under unprecedented circumstances and without one of its most fundamental parts. During the past year we have seen the doors close on our pitches and soccer grounds, matches and fixtures cancelled, cheering supporters forced to remain at home.

It has been a difficult but necessary sacrifice, willingly made by players, coaches, staff and supporters as we face, collectively, the challenge of Covid-19.

During this past year there have been many reminders of the integral role of the integral role within our society that is occupied by our sporting community. In towns, villages and suburbs across the country it has so often been our sports clubs and their members who have led initiatives to help, make contact with and reassure those of our people who are vulnerable or isolated at this time.

It spoke profoundly of the role of our sports clubs and associations in creating and sustaining communities as places of belonging, of care and of shared interests and experience. Not only do they contribute to our cultural and sporting life, they also enable young people to flourish with dignity and self-esteem and so reach their potential. Sport connects neighbour to neighbour, promotes intergenerational solidarity and unites a diverse people in a common language.

In terms of participation through the generations, club soccer is to the foreground.

May I take this opportunity, therefore, to thank all those who have continued their important work throughout this challenging period, making the continuation of the League of Ireland possible, ensuring that matches are played and enabling supporters to continue their commitment to their local teams.

Sadly, the consequences of coronavirus related restrictions has led to increased gambling by those who are isolated, and unable to attend or participate in sports events at this time.

May we all continue to work to protect our sports, and to support the game of football, its clubs and the FAI for all sports lovers.

I also thank the players who have continued to train and play with the utmost professionalism, despite the difficult circumstances under which they have been required to do so.

May I wish Shamrock Rovers and Dundalk FC every success, as they compete for this year’s President’s Cup.

Finally, I thank all the supporters who have continued to generously encourage and applaud their teams virtually, as they wait patiently for the day they can once more do so in person.

As a new season kicks off, I wish you all an enjoyable and successful season.

TV: Live and FREE on www.watchloi.ie