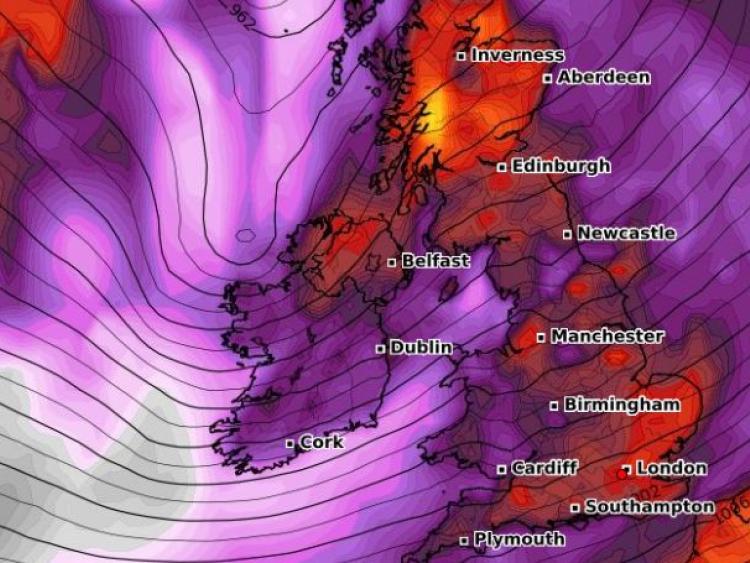 Met Éireann is warning that the spring weather is set to be blown away by a week of wind and rain which looks to have a stormy element.

While Monday will start out dry with some bright or sunny spells, the day will mark the start of a very unsettled spell.

Met Éireann says rain will gradually spread from the west over the course of the day. Highest temperatures will reach 7 to 11 degrees in light to moderate southerly winds, fresher on western and northwestern coasts. It expects conditions will deteriorate further from Monday says the forecaster.

"It will gradually turn more unsettled, with some very disturbed weather through midweek," it says in its outlook.

The forecaster is warning of extremely windy in some parts on Wednesday night with some "severe and damaging gusts". Heavy squally showers, some of hail and thunder are also in the forecast from Met Éireann which also says that it will get colder as the week goes on with a risk of ice due to frost in places.

A lot of rain is expected warns the forecaster in its farming forecast section.

"In contrast, unsettled weather in the coming week will bring well above normal rainfall totals countrywide with between around 150% and 300% of normal, which is between around 25 and 70mm of rain," it says. MORE DETAILS BELOW TWEET.

Today Sunday, high pressure should give a mostly dry and settled day ️

From Monday on, ☔️ is set to return, with conditions becoming increasingly more unsettled as the week progresses️

Monday night: Monday night will be mostly cloudy with a little light rain, drizzle and mist extending eastwards, but clearing from most places later in the night. A few clear spells will develop in parts of the west for a time. Lowest temperatures of 3 to 6 degrees in mostly light to moderate south or southwest winds.

Tuesday: Tuesday will be a mostly cloudy day but dry for a time apart from a little patchy light drizzle in southern and southeastern coastal areas. However; rain will push into western parts later in the afternoon and will spread eastwards through the evening. The rain will be heavy at times in the evening, especially in parts of the west and northwest. Becoming windy too through the day with southerly winds increasing fresh to strong and gusty with gales in some western and northwestern coastal areas. Highest temperatures of 8 to 11 degrees.

Wet and rather windy at first on Tuesday night, with rain heavy for a time, but the rain will mostly clear southeastwards overnight, with a few showers following into northwestern parts. The winds will veer westerly with the clearance and gradually moderate, still fresh to strong though in coastal parts of the northwest. A few clear spells will develop overnight, mainly in parts of the west and north. Lowest temperatures of 3 to 6 degrees.

Wednesday: Mostly cloudy but mainly dry to begin on Wednesday, but outbreaks of rain will spread from the southwest through the morning and afternoon. Becoming rather windy through the day too, with south to southeast winds increasing fresh to strong and gusty, increasing strong to gale force and gusty southwesterly later in some parts of the west and south. Highest temperatures of 9 to 12 degrees.

Becoming extremely windy in some parts on Wednesday night with strong to gale force winds; southwest to begin then veering west to northwest, with some severe and damaging gusts. There'll be further spells of rain overnight too, followed by heavy squally showers, some of hail and thunder. Turning colder with lowest temperatures of 1 to 4 degrees.

Thursday: Still windy on Thursday with widespread heavy squally showers, some of hail and thunder and with the possibility of some turning wintry over higher ground. Westerly winds will be fresh or strong and very gusty, with gales in coastal parts of the west and south. Feeling cold with highest temperatures of 6 to 9 degrees.

Continuing windy and very showery on Thursday night, with some hail and the possibility of thunder. The winds will gradually start to moderate later in the night, with showers becoming more confined to parts of the west and north. Lowest temperatures of 2 to 4 degrees, with perhaps some frost and ice in any sheltered parts later on in the night.

Friday: Friday will bring some sunshine and further showers; these most widespread in western areas, some heavy, though the showers will tend to become isolated later. Highest temperatures of 6 to 9 degrees in a moderate to fresh and gusty southwest wind, still strong for a time in coastal parts of the west and north, but easing later and backing southeasterly.

Weekend: Continuing very unsettled for the weekend, with further spells of wet and windy weather at times.