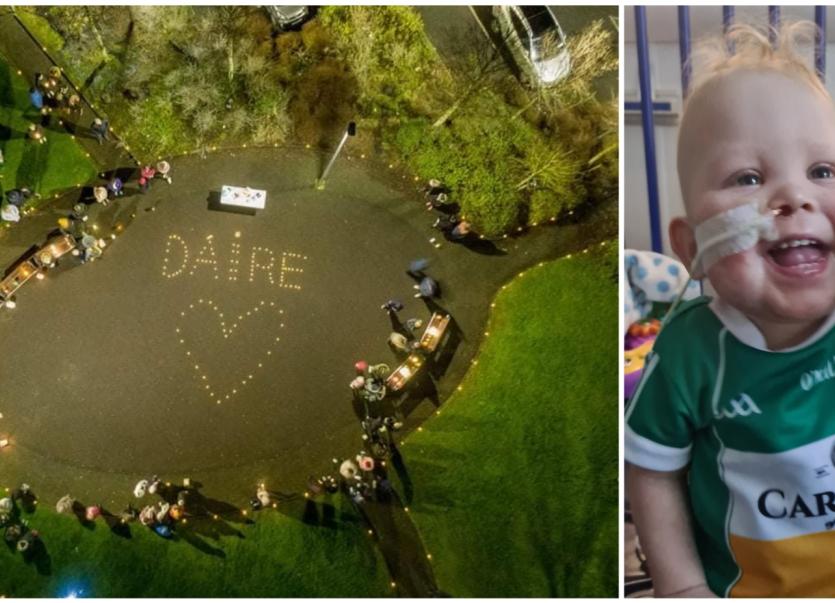 The community around Edenderry is united in prayer for little Daire

The town of Edenderry, as well as people from all over the world, have been praying over the last few days after a heartbreaking update on the health of little Daire McDonnell.

The Edenderry one-year-old who was flown to the UK for specialist treatment for a rare bowel disease in October is now in a critical condition, according to his family.

Daire was flown to Newcastle by the Irish Air Corps after being deemed a match for a potentially life-saving stem cell transplant. He is still in the UK receiving treatment. He was born with multiple atresia of the bowel. He is dependent on total parenteral nutrition (TPN), a form of feeding that bypasses the gastrointestinal tract.

A side effect from the TPN is that it affects your liver which has led to Daire being diagnosed with liver disease. His condition, combined with other illnesses, is life-threatening.

In recent days, his family posted an update from his bedside in the UK.

"Dáire is still critical. Things aren't really going our way, unfortunately. His kidneys are now starting to give out and there is a possibility he will have to go on dialysis which is extremely high risk with the way he is.

"His liver also has them very worried and he has bleeding on the lungs which is putting pressure on his heart. We had a meeting with doctors and they asked what way we feel about Dáire. We have said from day one that Dáire is the boss he will decide what course we go.

"We have tried all we can and it's now down to him. He came into this world fighting and he has been fighting since. We just pray he has enough fight in him to get through this. We need plenty of prayers for our little man."

In a further update on Monday, his family said: "Dáire is still critical but he's stable. He is needing a lot of support from the ventilator and is heavily sedated. He is on less oxygen than this morning; numbers are slightly better than they were, so please God he will pull through but he has a serious fight ahead."

In his native Edenderry, people took to social media to share their support and prayers for Daire. Many lit candles over the festive period and posted them to the 'Our amazing fighter Daire' Facebook page.

The Edenderry tractor light up group which held a successful fundraiser for Daire before Christmas again lit up the town with prayers for Daire.

Daire is a much-loved little boy in his family, his town and further afield.