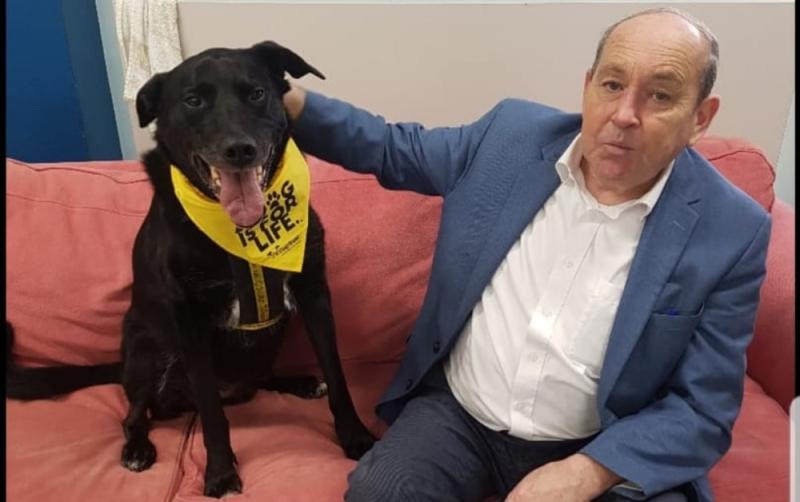 Dogs Trust, Ireland’s largest dog welfare charity, has announced that one of their most beloved residents, Oscar, is spending his first Christmas in his forever-home after eight years of waiting.

Santa Paws has come to town early for the eleven-year-old Labrador who will have his very own stocking hanging on the fireplace this Christmas. Last year, the team in Dogs Trust wrote a letter to Santa on Oscar’s behalf, appealing for a family to adopt him.

In exchange, he promised to bring them on long walks, entertain them with his impressive repertoire of tricks and play fetch for hours. Little did the charity know that their wish would come true.

Oscar’s best friend and Canine Carer, Cheryl Monaghan, said: “As a carer you try not to get too attached to a dog because you hope before long they will find their Forever Home -but Oscar became a favourite as we got to know him! Each year would pass, and Oscar would still be overlooked for being too strong, too big, and then sadly, too old.

"Brian saw past all of that and was adamant about adopting Oscar after the sad passing of his dog Jake who was also adopted from us. You couldn’t find a more dedicated adopter than Brian - he came into our centre every day for several weeks to build up a bond with Oscar. Now Oscar has his own bedroom, couch, back-garden, and most importantly his own family. We couldn’t be happier for him!”

Brian Lahiff, Oscar’s adopter added: “After losing my dog, and best friend Jake, I knew I wanted to give another dog a second chance at happiness. I chose Oscar for one reason, and one reason only, Oscar had spent eight years waiting to be adopted.

"He deserved a chance to spend his final years on the outside looking in, rather than the inside looking out. Although I was broken hearted when Jake passed, I knew he would like me to adopt one of his buddies in Dogs Trust and give another dog a taste of the happy life that he and I spent together.

"You might think adopting a long-term dog like Oscar is a big commitment, but it’s one of the most rewarding experiences you could ever hope to have. This Christmas is an extra special one for both Oscar and me. It’s our first one together so I’ll make sure to make up for the Christmases he missed in a home. Christmas is a time for giving, and Oscar has given me more than I could ever imagine, so I’d like to return the favour.”

To continue to be able to care for dogs like Oscar, Dogs Trust are appealing to dog lovers for their support.

A lovely way to help more dogs find their own Forever Homes is Sponsoring a Dog or a Puppy Playgroup online. This makes for a lovely Christmas gift, and throughout the year as the team keep each sponsor updated with emails and letters on their Sponsor dog.