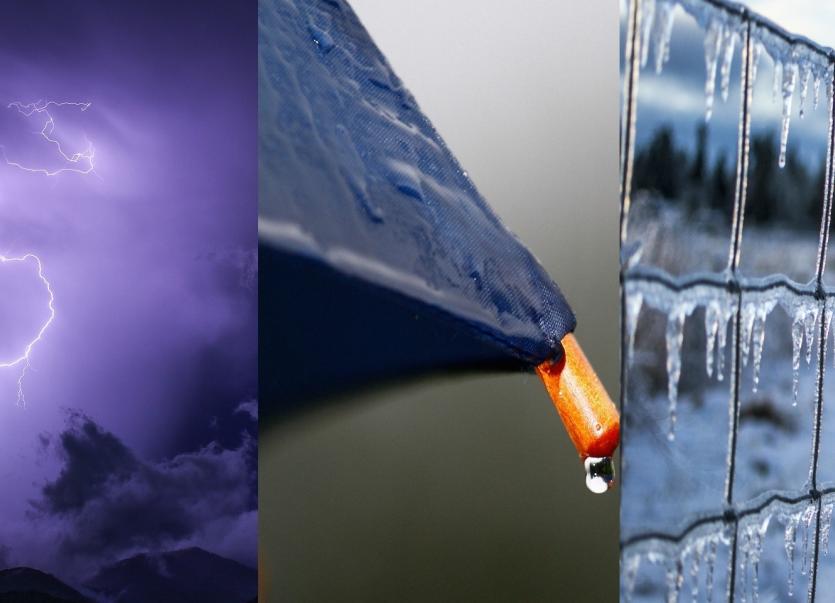 The weather forecast for Ireland for the coming week from Met Eireann is for the changeable and unsettled weather to continue for the rest of the week. Mild at first, but turning cold from midweek, with a risk of frost at night and wintry precipitation at times.

Also read: 'Health is the crown of the well that only the sick can see': Threat of Coronavirus a concern to Ballymahon's Laura Noonan

The weather forecast for Ireland for Monday from Met Eireann is for a wet and windy day, with rain along west and southwest coasts in the early morning becoming widespread during the day. The rain will be heavy in places, with a risk of flooding, especially in parts of Munster, Connacht and west Ulster. Fresh to strong southerly winds will gradually veer southwesterly. Cold during the morning, but becoming milder through the afternoon and evening with temperatures reaching 9 to 11 degrees.

Very mild and mostly cloudy on Monday night, with occasional rain, persistent and locally heavy at times in Ulster, Connacht and west Munster, but more patchy and intermittent in the east and southeast. Min. 8 to 11 Celsius, in moderate to fresh southwesterly winds, strong on Atlantic coasts.

The weather forecast for Ireland for Tuesday from Met Eireann is for it to be wet and windy in many areas at first, with rain and fresh and gusty southwesterly winds. Brighter conditions, with a few scattered showers, will extend gradually from the northwest, but rain may return to the southwest later. Maximum temperatures 10 to 14 Celsius, but turning colder later, as winds veer westerly, later easing.

Tuesday night will be breezy or windy again, with clear spells and scattered showers, most of them in the western half of the country. Min. 2 to 4 Celsius, in moderate to fresh southwesterly winds, strong in Atlantic coastal areas.

Also read: Betting: Five horses worth a look in Cheltenham this week

Cold and windy on Wednesday with sunny spells and scattered showers, some of hail, with a risk of thunder. Turning much colder, with some of the showers turning wintry later Wednesday and Wednesday night. Max. 6 to 8 Celsius, in moderate to fresh southwesterly winds. Min. overnight. 0 to 3 Celsius, with a risk of frost in sheltered places.

Our Atlantic chart shows precipitation and pressure forecast in 6 hour intervals for the next 7 days. https://t.co/9Giuj4CR5m
The national forecast and the national outlook for coming days are available here.https://t.co/9gKN6SVok4 pic.twitter.com/Po6bxoU7Ry

Cold, with sunny spells and scattered showers, some heavy, with a risk of thunder on Thursday. Most of the showers will be of rain and hail, but some of sleet are possible, mainly over high ground. Max. 6 to 9 Celsius, in mostly moderate to fresh southwesterly winds.

According to Met Eireann, the outlook is uncertain for Friday and next weekend, but early indications are for cold and unsettled weather continuing.