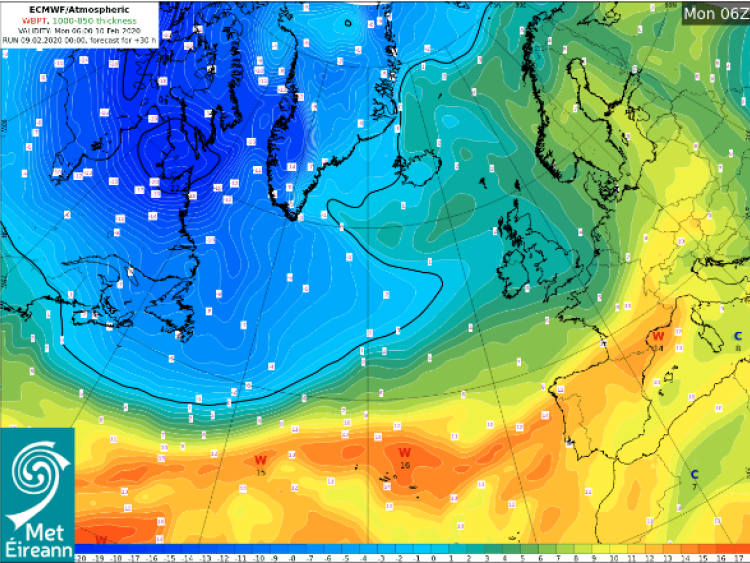 Met Éireann has issued a snow and ice weather warning alongside a wind warning in the wake of Storm Ciara which has dragged in bitterly cold conditions.

The forecaster's Status Yellow - snow ice weather warning for Ireland says there will be widespread wintry showers on Monday and Tuesday with some snowfall accumulations, especially in the west and north.

Some disruption to travel is possible, particularly over higher routes.

The warning is valid from the early hours of Monday, February 10 to just before midnight on Tuesday. The warning was issued at noon on Sunday.

A Status Yellow wind warning for Ireland remains in force. It says Storm Ciara will continue to produce very strong west to southwest winds over Ireland with mean speeds of 50-65km/h and gusts generally of between 90 and 110km/h, higher in Atlantic coastal areas.

It warns that a combination of Spring Tides and high seas will result in a significant risk of coastal flooding.

This is valid from noon on Sunday to noon on Monday. MORE WEATHER DETAILS BELOW TWEETS

Please see our meteorologist's commentary regarding the coming cold spell on https://t.co/gjN9OKdtdO.

NATIONAL FORECAST issued by Met Éireann at 1.12pm on February 9.

TODAY - SUNDAY 9TH FEBRUARY
Storm Ciara will produce very windy conditions across Ireland today with sunny spells and frequent squally showers, some of hail and thunder. A combination of Spring Tides and high seas will result in a significant risk of coastal flooding and with some spot flooding also. Highest temperatures of 9 to 12 degrees in strong west to southwest winds and gales along coasts.

TONIGHT
Windy this evening and tonight with stormy conditions returning to some Atlantic coasts. Widespread showers, turning increasingly wintry overnight and with a continued risk of thunder and localised flooding. Overnight lows of 0 to 3 degrees with frost in sheltered spots and lying snow in some areas by dawn.

TOMORROW - MONDAY 10TH FEBRUARY
Monday will be bitterly cold and very windy with a significant wind chill factor. There will be a mix of sunny spells and widespread wintry showers and with a continued risk of thunder and localised flooding. Highest temperatures of 3 to 6 degrees in strong westerly winds and gales at the coast.

Tuesday will be a bitterly cold day and still very windy with a significant wind chill factor. Very showery too, still wintry at times, with hail, sleet and snow. Westerly winds will be fresh to strong and gusty, with gales in western and northern coastal areas. Highs of only 3 to 7 degrees. Winds moderating overnight with some frost and ice developing too, and overnight lows of -1 to 2 degrees.

Wednesday will be another cold day but with lighter winds, at least for daylight hours. A frosty start but sunny spells developing as hail, sleet and snow showers becoming gradually confined to Ulster.

At the moment it looks like turning wet and windy for Wednesday evening/night followed by squally showers on Thursday with the ongoing risk of severe winds at times and wintry falls.

Mainly dry on Thursday night with milder weather following for Friday and Saturday though staying unsettled.