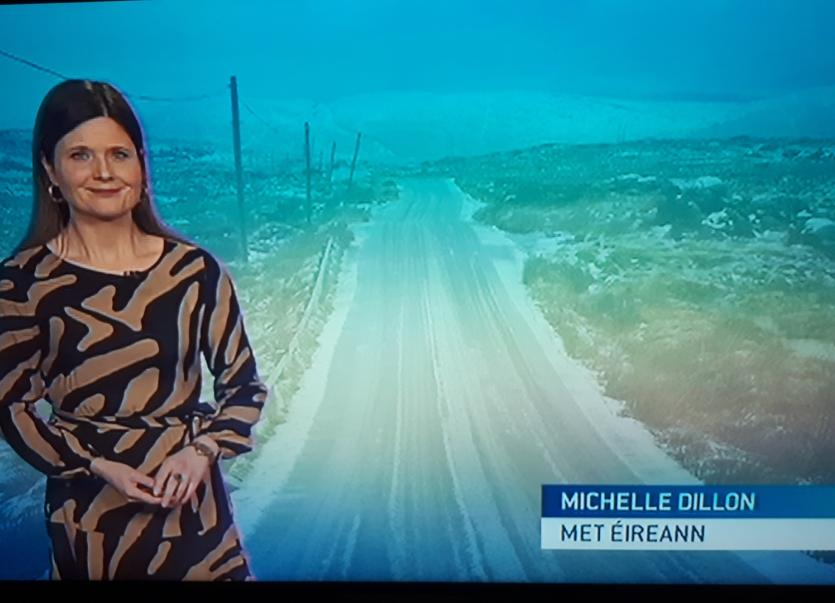 Met Éireann latest weather forecast on the cold snap indicates that the north and west could bear the brunt of the impact but wintry showers could spread to all areas on Monday.

In her forecast on RTÉ after the Sunday evening news, meteorologist Michelle Dillon delivered the latest Met Éireann prediction on what to expect.

"The cold air has pushed right down across the country. We have a weather advisory in place up until Tuesday evening. That is for wintry showers of hail, sleet and some snow too especially over higher higher ground and most widespread across Ulster and Connacht but some at lower levels in these parts too especially at times tonight (Sunday) and tomorrow night too," she said.

The forecaster said a Status Yellow snow ice weather warning is in place for Connacht and Ulster.

Very cold overnight, with widespread showers at first, many of them turning wintry, becoming confined mainly to the western half of the country. Some showers of snow are likely, especially on high ground, but also at lower levels, mainly in parts of Ulster and Connacht. pic.twitter.com/TPlURxL66f

TONIGHT - Sunday
Widespread showers early tonight, many of them turning wintry, becoming confined mainly to Ulster, Connacht and west Munster later in the night, with just isolated wintry showers in the east. Some showers of snow are likely, especially on high ground, but also at lower levels, mainly in parts of Ulster and Connacht. There is also a risk of thunder, mainly on Atlantic coasts. Lowest temperatures -1 to +2 degrees, with frost and ice in sheltered areas. Winds mostly moderate southwesterly, but fresh to strong in Atlantic coastal areas.

TOMORROW - MONDAY 27TH JANUARY
Monday will be cold and blustery with a mix of sunny spells and scattered showers, some of hail and sleet. Some snow showers also, mainly on high ground. There is also a risk of thunder, mainly in Atlantic coastal counties. Showers will be more isolated in the east and southeast where it will be largely dry. Highest temperatures 3 to 7 Celsius, in moderate to fresh and gusty south to southwest winds, strong on exposed coasts.

Very cold on Monday night, with clear spells and a widespread sharp frost. Blustery wintry showers continuing, with falls of hail, sleet and snow. Showers most frequent in the west, with lying snow possible. Lowest temperatures of -1 to +1 degrees, in fresh to strong and gusty west to southwest winds, with gales possible near the north coast.

Tuesday will be cold and blustery, with sunny spells and wintry showers, mainly in western areas. Showers will be a mix of rain, sleet and hail, with some snow on high ground. Afternoon temperatures of 4 to 6 degrees, in fresh to strong and gusty westerly winds.

Tuesday night:
Clear spells and scattered showers at first on Tuesday night, but becoming more isolated as the night goes on. Some showers will be wintry, mainly on higher ground. Lowest temperatures of 1 to 3 degrees, in moderate to fresh and gusty westerly winds.

Wednesday:
Turning less cold on Wednesday, with a mix of cloud and sunny spells. Generally dry, with some scattered outbreaks of rain, mainly in western and northern areas. Highest temperatures of 7 to 10 degrees, in moderate southwesterly winds.

Wednesday night:
Dry in most areas on Wednesday night, but rain will possibly affect south and southeast coastal areas. Lowest temperatures of 4 to 6 degrees, in light to moderate south to southwest winds, fresh along northwest coasts.

Thursday:
Thursday is looking mostly dry with some sunny spells and just a few isolated showers, mainly in the northwest. Continuing mild, with highest afternoon temperatures of 9 to 11 degrees, in light to moderate westerly winds, fresher along northwest coasts.

Thursday night:
Dry for much of the night, but rain is expected to move into Atlantic counties by morning, possibly heavy at times. Light to moderate westerly winds backing southerly and freshening along western coasts. Lowest temperatures of 2 to 4 degrees.