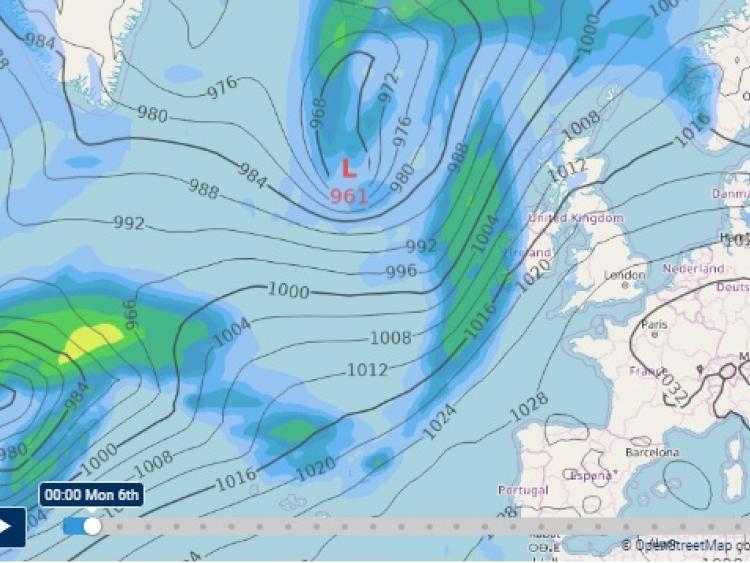 Stormy weather in Met Éireann's weather charts for week ahead

Met Éireann has issued wind weather warnings for a number of counties ahead of a possibly stormy and cold week of weather.

The forecaster has issued a Status Yellow Wind Warning is in place from midnight until 8am on Monday for Donegal, Galway, Mayo and Kerry. Southerly winds will reach mean speeds of 50 to 65 km/h with occasional gusts of 90 to 100km/h.

Apart from the wind Met Éireann is forecasting heavy and persistent band early on Monday.

More strong winds are expected as the week progresses. There is also cold weather in the forecast. MORE BELOW TWEETS.

Our Atlantic chart shows precipitation and pressure forecast in 6 hour intervals for the next 7 days. https://t.co/9Giuj4CR5m
The national forecast and the national outlook for the coming days is available herehttps://t.co/9gKN6SVok4 pic.twitter.com/NadWoHomVW

Met Éireann forecast details issued at 12.12pm on its website on January 5 as follows:

TODAY - SUNDAY 5TH JANUARY
Staying mostly cloudy this afternoon though largely dry with just patchy light rain or drizzle. Temperatures will be between 9 and 11 degrees with a freshening southerly wind developing through the day.

TONIGHT
The southerly wind will strengthen further through the evening, becoming strong for tonight, with gale force winds at the west coast. It'll stay mostly dry for the night, with rain arriving on western coasts before morning. Lowest temperatures of 7 or 8 degrees.

TOMORROW - MONDAY 6TH JANUARY
Tomorrow, Monday, will be windy for a time with strong southerly winds reaching gale force at the west and south coast through the morning. The rain in western areas will move quickly eastwards in a heavy and persistent band, clearing the west early and the east by lunchtime. As the rain clears the winds will ease for a time and veer westerly and the sun will come out with just a few showers to follow, most frequent in the north. It'll become cooler as the rain clears with afternoon temperatures of 7 or 8 degrees.

The outlook for Monday night is for winds to freshen again as they back southerly once more, reaching gale force on the coasts again. Temperatures will fall in the early part of the night to 3 or 4 degrees, then rise overnight as the wind freshens and cloud thickens, bringing rain and drizzle in to the north and west.

On Tuesday strong southerly winds will veer westerly and steadily ease through the day. Outbreaks of showery rain will mostly affect western and northern parts of the country. Temperatures in the afternoon will be 13 or 14 degrees, dropping overnight to between 3 and 6 degrees, coldest in the north.

The outlook for the midweek period is uncertain in detail with an area of low pressure tracking northwards over the country giving changeable wind patterns and bringing outbreaks of rain from the south.

At the moment the suggestion is for a cold morning on Wednesday with light variable or southerly winds and, after a mainly dry start, outbreaks of rain developing from the south and west. There's a spell of heavy rain for Thursday in the south, spreading north and eastwards, then temperatures dropping through Thursday to give a cold frosty night on Thursday night.

The extended outlook currently suggests a westerly airflow bringing mostly dry weather for Friday with rain for the weekend.