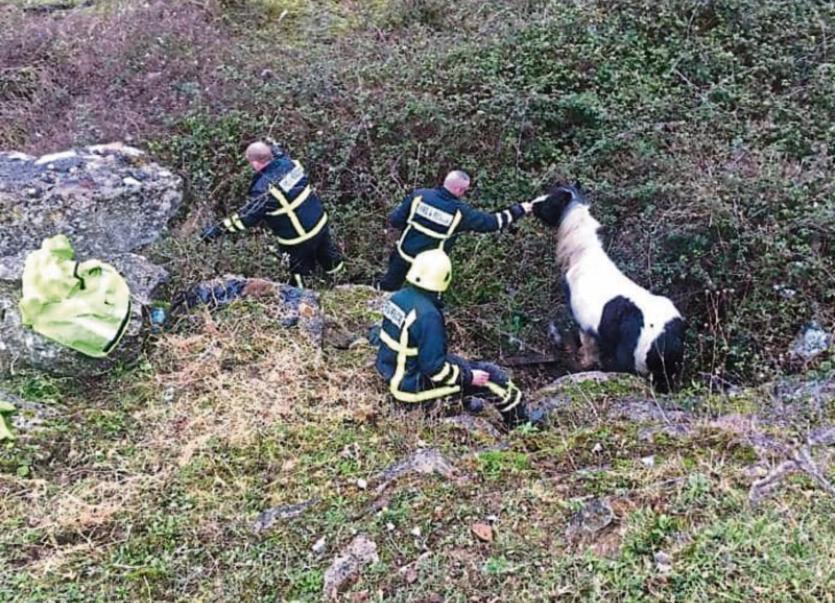 Firemen from Rathkeale helped retrieve one of the ponies from a ravine | PICTURE: Deel Animal Action Group

RETAINED firemen and gardai were deployed to a field in West Limerick earlier this week after a number of malnourished and dead horses were discovered.

Details of the horrific discovery near Rathkeale have been revealed by the Deel Animal Action Group which was alerted to the stricken animals and remains by a member of the public early on Monday morning.

“After locating the field, and climbing in, it soon became apparent what horrors lay ahead. There was a horse, very visible from the road, lying down. With a sinking feeling we walked towards it and found that it was, in fact dead. The poor pony had been dead for some days. It was also very obvious that she had died from starvation and had literally dropped where she stood,” said a spokesperson for Deel Animal Action Group.

The body of a foal was also located in the same field a short time later while volunteers subsequently discovered three ponies in a deep ravine in another part of the field.

“Two  were able to get out but one was stuck. We are not sure how long he was there but he appeared to be weak and lethargic. We couldn’t release him as the brambles were far too thick and the climb out of the ravine was far too steep,” read a post on Facebook.

Firemen from Rathkeale station attended the scene for around an hour on Monday to help recover the pony from the ravine. Gardai also attended as did a vet from the Department of Agriculture.

After hay was bought to the field the volunteers were alerted to several other horses – all of which were in poor condition and  underweight.

“As a charity we do not have the power to seize equines (or any animal). We contacted the Department of Agriculture vet who arrived later that evening to inspect the remaining horses, the area in which they were being kept, and from here it is out of our hands,” confirmed the Deel Animal Action Group.

A number of very large bones which were confirmed to be equine were also found during searches of the field.

It’s understood the Department of Agriculture has launched an investigation and that orders have been served on the owners of the horses and field they were found in.

Also read: Gadget on sale for a few euro in Aldi could stop your car being stolen