LATEST: Met Éireann predicting 'thunderstorms, hail and flash floods' on the way for parts of the country today

Heavy rain and thundery downpours for Co Longford this weekend 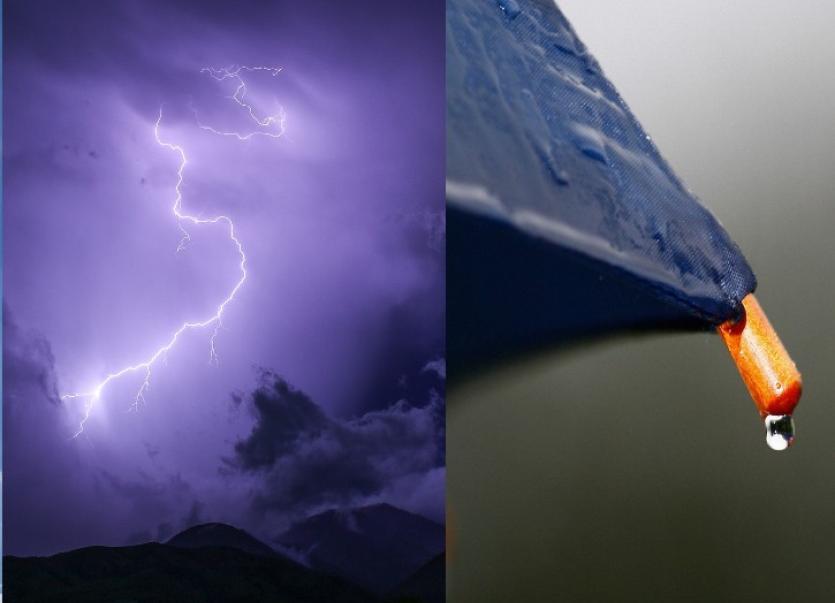 Heavy rain and thunder on the way this weekend

Met Éireann say that there could be thunderstorms, flash floods and hail on the way for many counties today, and it look's like Co Longford is in for more rain and thundery showers this weekend.

However, today it will be warm with some sunny spells and top temperatures of 22C.

Also read: Longford Dog Control Services had a deficit of €80k in 2018

"Remaining heavy, and occasionally thundery overnight rain affecting northern parts of the province will soon clear this morning, giving way to bright or sunny spells with showers today. Some of the showers will be heavy, with thunderstorms and a risk of hail. There is potential for flash flooding and poor visibility in localised downpours.

Humid, with top temperatures of 18 to 21 degrees Celsius. Fairly windy, especially near the coasts with fresh to strong south to southeast winds, but winds will be generally lighter in western parts of the province,"said forecasters from Met Éireann.

Showers will continue tonight, but there will be clear spells also. In southern counties, winds will veer southwesterly, increasing strong to gale force near the coast.

The winds be generally light to moderate variable further north, with mist and fog patches occurring. Minimum temperatures will be around 13 to 15 degrees.

Meanwhile, forecasters say this weekend will see the arrival of 'generally unsettled and showery conditions'.

They said: "Saturday will bring a mix of bright or sunny spells and scattered showers. Again, many of the showers will be heavy and possibly prolonged, especially over the northern half of the province, with a risk of thunderstorms.

Quite windy over the southern half of the province with moderate to fresh and gusty southwesterly winds, strong to near gale at the coasts, but winds will be generally light to moderate west to northwest further north. Top temperatures of 17 to 20 degrees Celsius.

Also read: Gardaí appeal for assistance in search for woman (54) missing since Monday

Saturday night will see further heavy showers or longer spells of rain will continue to occur on Saturday night. Light to moderate west to northwest winds will be fresh to strong at times along coasts. Lows of 11 to 14 degrees.

Sunday will be a much fresher and cooler day. Overnight showery rain could be slow to clear the eastern half of the country, but drier, brighter conditions with just isolated showers in the west will gradually extend eastwards as the day goes on.

Feeling cooler than recent days with maximum temperatures ranging 14 to 17 degrees north to south. Winds will be light to moderate northwesterly. Sunday night will be mostly dry with clear spells, just isolated showers near Atlantic coasts. Rather cool with lows of 7 to 9 degrees."