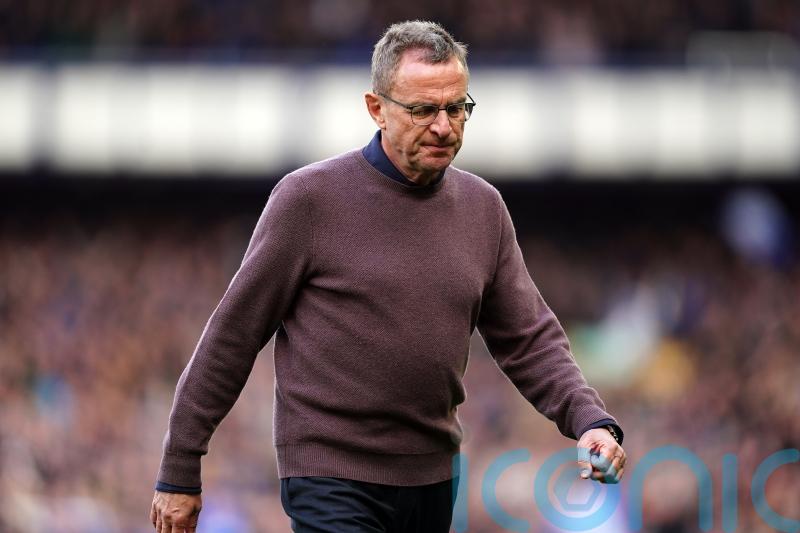 Ralf Rangnick admitted Manchester United do not deserve to finish in the Champions League spots if their performance levels for the rest of the season are similar to what they showed at Everton.

Cristiano Ronaldo and Marcus Rashford were among six changes to United’s line-up at Goodison Park and the latter threatened twice early on, denied on both occasions by England team-mate Jordan Pickford.

But the momentum swung dramatically in Everton’s favour when Anthony Gordon opened the scoring with a deflected 27th-minute strike, which proved decisive as the struggling Toffees secured a 1-0 victory.

United’s ambition of finishing in the Premier League top-four is receding and Rangnick was left to bemoan a toothless attacking display against an Everton side that lost 3-2 at relegation rivals Burnley in midweek.

“With all respect to Everton because they have a good team, but if you don’t score against a team who conceded three goals against Burnley in the end you cannot expect to get anything out of it.

“The players themselves should be eager to play international football, if possible Champions League.

“But if we play like we did here we just don’t deserve it. In order to qualify for Europe you have to be able to score in 95 minutes in a game like this.”

Rashford, who has now scored just five times in 28 appearances in all competitions this season, was lively early on, but Ronaldo was largely kept subdued and while he had an opportunity to equalise in added time the Portuguese’s half-volley was kept out by the magnificent Pickford.

Rangnick rued the forward line’s profligacy early on, acknowledging that Gordon’s opener changed the complexion of the game, with the mood among the home fans lifting the Everton players.

“The first 25 minutes we were in full control of the game,” Rangnick added. “We didn’t even in those 25 minutes take enough and make enough advantage out of that dominating period in the game.

“You could literally feel that they were crumbling after that result against Burnley, they were quite logically not full of confidence but we didn’t take advantage of that and with their first shot on goal, it changed the game and changed the atmosphere in the stadium.

Defeat to the Clarets meant Everton sat just one point above the relegation zone but they have now given themselves a buffer and alleviated the building pressure on manager Frank Lampard.

It was just a third win in 10 league matches for Lampard but the former Chelsea boss insisted he is not paying too much attention to the table, with Burnley taking on rock-bottom Norwich on Sunday.

“Some people around me are calculating how many points we’ll get,” Lampard said. “It means nothing to me. I have an eye on it but all I think about is the next game and what that means.

“It might change the face of it right now but it might look different by the end of the weekend.

“We absolutely know it’s in our hands to keep performing, giving everything for every game to stay in the league, regardless of the others.”

Everton now have an 11-day break before welcoming Leicester to Merseyside and Lampard recognises the importance of a win here – and, in particular, what it means for his home life.

The 43-year-old former midfielder, who is married to television presenter Christine Lampard, said: “It made it important for my wife, she’ll be delighted – she’s got a nice couple of days ahead of her!”