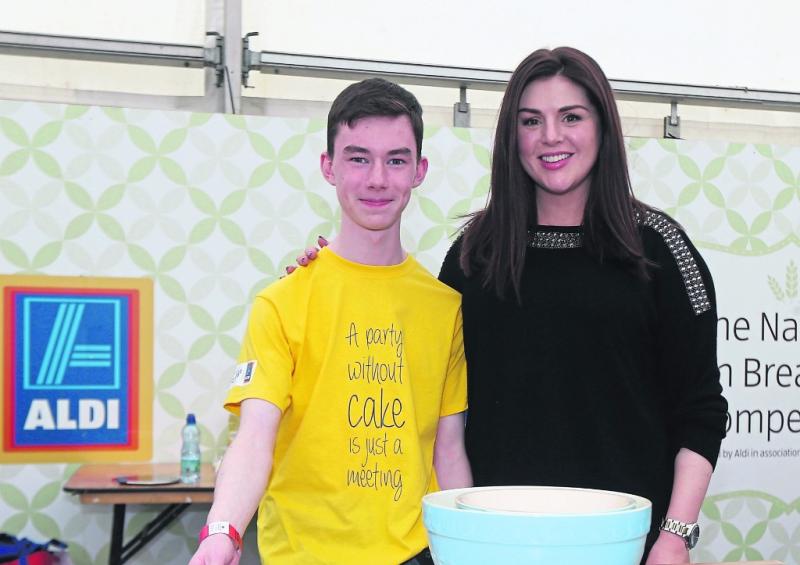 Tommie Cunningham pictured with Síle Seoige at the Ploughing Championships.

Eight teens from throughout Ireland battled it out in front of a live audience in a bake-off presented by Síle Seoige.

The theme of the Aldi Foróige Baking Competition for 2017 was Lemon Drizzle Cake. The hopeful teens had already baked their creation at the county level, and then in regional bake-offs to make it to the Aldi Marquee at the Ploughing Championships.

Tommie Cunningham won €300 in Aldi vouchers for being runner-up in the competition. The winner, Jessica Doherty from Leitrim, will have her cake put on-sale nationwide in Aldi stores next year; received a €1,000 bursary to help her on her baking journey; as well as a trip for her local Foróige group to Delphi Adventure Centre in Co Mayo.

Sean Campbell, CEO of Foróige said,“We’re so proud of the talent and diligence shown by these young bakers and delighted to be partnered with Aldi yet again this year for the competition. It’s a fantastic opportunity for a budding baker not only to compete at this level but to get the chance to sell their creation nationally.”

Check out the all Longford Leader #Ploughing17 coverage here