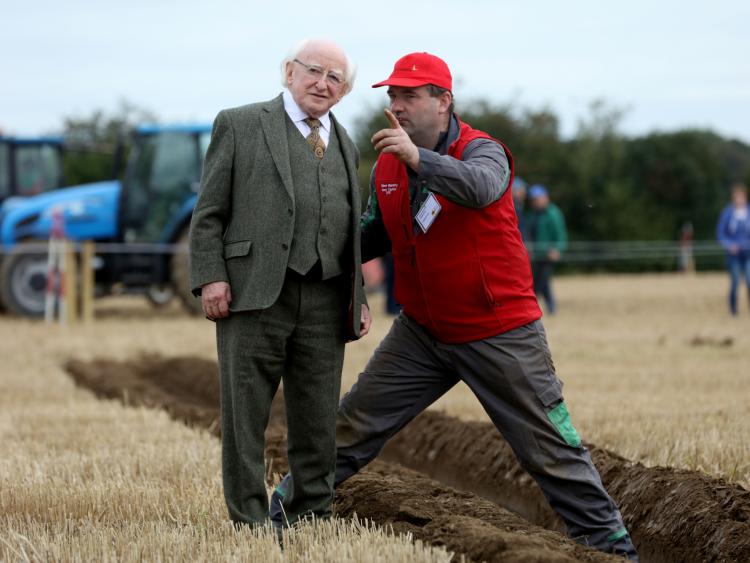 It has been announced that President Michael D. Higgins will be on hand on Tuesday, September 19, to officially open the National Ploughing Championships in Screggan, Tullamore.

Since his inauguration in 2011, the President has attended the Ploughing Championships each year, describing the festival as “an outstanding example of the Irish genius” and “the most beloved rendez-vous in Ireland’s rural calendar.”

In his speech at the 2012 Ploughing Championships, the President paid tribute to the event organisers and their approach to celebrating “both tradition and innovation” in the agri-food sector.

The following year, in Ratheniska in 2013, the President highlighted the changing age profile of the farming community, and the issue of public awareness of farming and food production. In his speech, the President said that “maintaining a vibrant agriculture and preserving the family farm model is of critical importance to the future of this country.”

In his speech for the 2014 National Ploughing Championships, the President focused on the themes of milk quotas and the Year of Family Farming. The President said that “it is essential that the farming community ensures that the fruit yielded by these new opportunities are shared by the many, and not just divided among the biggest."

"Indeed, I believe that it is equally important to build up Irish agriculture’s capacity to expand into new markets globally, as it is to foster a thriving family farming sector, allowing as many who wish so as possible to make a viable living out of farming.”

In 2015, the President focused on farm safety and sustainability. In his speech in Stradbally, the President highlighted that “it is critical that we aim for and achieve a day when farms are, not only a place where the wisdom of generations connected to the land are treasured, but also safe workplaces in this country, when children can spend their early years in safety preparing for a  life in farming."

"We must always remember our great duty to protect not only our precious land and environment, but also those for whom the land is a way of life.”

Stressing the environmental impact of farming, the President said that "farmers, through their stewardship of the land serve a vital role in our society in producing healthy food while safeguarding our shared environment including our wildlife, our air and our water. The challenges of climate change place an additional demand and responsibility on farmers to ensure that they play their part in global efforts to reduce emissions.  They can contribute an energy and wisdom to these challenges."

The President’s speech at the Ploughing Championships in 2016 focused on rural life and rural development, including themes of rural communities, environmental sustainability and climate change. The President also spoke of the importance of ensuring family farms remain the backbone of rural society.

The President said that “our rural areas are not just places where people live and labour; they are also spaces that perform vital functions for society as a whole. They are the custodians of our food security and of our environmental balance; but they are, too, a repository of so many of our distinctive ways of life – a tapestry of landscapes, trades, and cultural riches; a mosaic of communities where locals and newcomers share warm neighbourly and working relations.”

"Farming is much more than an important part of the economy. It is a unique partnership between those who work the land, nature, fellow rural dwellers, and consumers who, if they are to live healthy life, must exercise choice. That choice requires living and supporting lifestyles that are informed by a mutual understanding of sustainability," he added.

Get down to Ploughing 2017 in Tullamore to see President Higgins visit and speak once more at Europe's largest outdoor event, hosting in excess of 300,000 visitors.