Longford Ploughing is a family affair 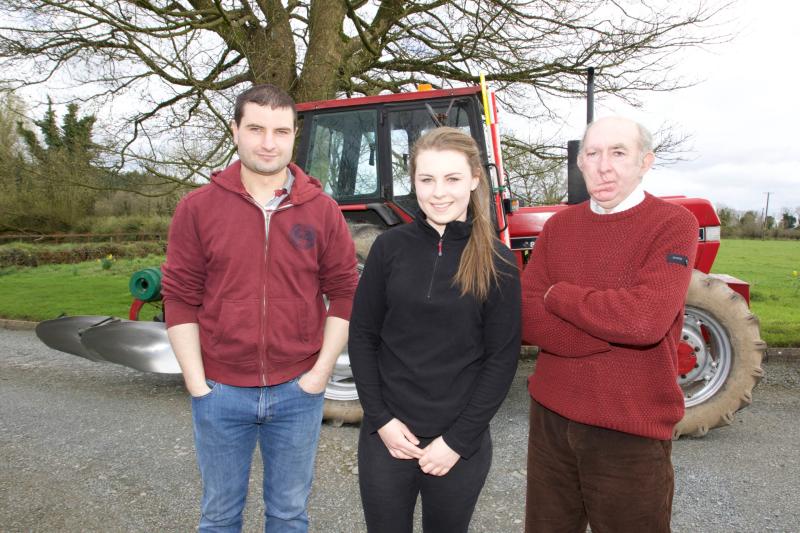 The Monaghan Family from Cranleymore in Edgeworthstown have been at the heart of Co Longford ploughing since 1977.

It all began with Tom who started ploughing that year.

His son Sean has since gone on to achieve great acclaim in local ploughing circles and this year, 20-year-old Eimear emerged victorious from the Novice event which sees here en route to the National Ploughing Championships which take place next week outside Tullamore in Co Offaly.

The Monaghans are champion tractor ploughers and with each passing year their success goes from strength to strength.

Tom is married to Maura and together the couple have seven children.

They also have three adored grandchildren, all of whom make Tom smile as he sits by the fire with Séan and Eimear to tell the Leader how the ploughing success began,

Tom started ploughing in 1977 and the first match he went to was in Moydow.

“I went to the All-Ireland two years later in 1979; it was my first All-Ireland and it took place in Kilkenny,” he added.

“Jimmy Coyle would have been a huge influence on me with regards to the ploughing.”

Jimmy had previously won an All-Ireland for Longford and in fact it was the first ploughing All-Ireland that Longford won.

“That was one thing that always stuck out in my mind.,” recalled Tom, before pointing out that Edgeworthstown always had the most competitors of any area at the County Longford Ploughing Championships.

Tom competed in the Co Longford Ploughing Championships every year after 1977.

The only year he didn’t compete was in 1989 and that year he suffered health problems.

I didn’t compete in either the county or the All-Ireland that year,” he said.

“But after that I qualified for the All-Ireland most years.

That was a high point for Tom and the entire Monaghan family who are steeped in ploughing history.

But, for every high there is a low, as they say, and the lowest point for Tom was the county ploughing match in Granard in 1979 when Liam Kiernan died suddenly while competing.

“That was one of the saddest days we ever had,” he recalled.

“I am still ploughing away and will continue to do so for as long as I can.”

Meanwhile, Séan Monaghan won an U-21 All-Ireland title a couple of years back.

His, is a well known name in ploughing circles in Co Longford and he is going from strength to strength which each passing year.

His All-Ireland win was a great day for him and brought years of hard work and dedication to the fore.

Séan says he was greatly influenced by his father and like all the greats in the field, he watched his father compete and attended ploughing meetings as a child.

Séan’s ploughing career began with the Novice event which provides ploughing enthusiasts across the county with the opportunity to try their hand at the skill and see how they get on.

It proved hugely successful for the Edgeworthstown man as it did for his sister Eimear who qualified for the All-Ireland for the first time after qualifying  in the 2017 Novice match back in March.

She was the first person from Longford to qualify for this year’s All-Ireland.

“I won’t be here if it wasn’t for daddy and Séan,” the 20-year-old ag-science student at UCD told the Leader.

“It is something that I did want to try and once I got going at it, I got better.

“It has always part of our family.”

Eimear went into the event determined to do her best, so when she emerged victorious, she was delighted.

“I’m looking forward to participating in the All-Ireland and I will have to get plenty of practice in between now and then,” she concluded.