Ukrainians gather outside Dáil in anger at Russian invasion 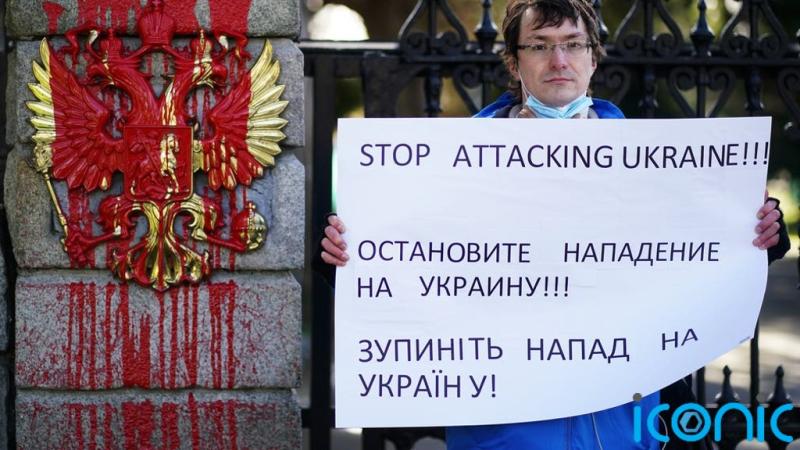 Dozens of Ukrainians gathered outside the Dáil on Thursday to express their anger at the Russian assault on their country.

Irish politicians joined the protesters over the course of the afternoon, including deputy premier Leo Varadkar and chairman of the Oireachtas Foreign Affairs Committee Charlie Flanagan.

Inside the Irish parliament, politicians spent much of Thursday reacting to the crisis in eastern Europe.

The Government, which has announced a visa waiver for Ukrainians trying to enter Ireland, was urged to do all it can to support the country.

Ada Pungas, who lives in Balbriggan in Co Dublin, said that her family were still in Ukraine.

She said that people at home were trying not to panic.

“Panic has worked for Putin.

“We pray for our army and we trust our army.”

She said that the entire world needs to support Ukraine against actions of Russian and Mr Putin.

“If he cracks Ukraine, he will never stop.

“His goal is to destroy all of Europe.”

Drivers beeped horns in expressions of support for the protesters, which grew in size in the early afternoon.

Protesters said that they would stay outside the parliament all day.

The entrance to the Russian Embassy on the south side of Dublin was splashed with red paint on Thursday morning, as news broke of the Russian attack.

Olga Popova, who is from Russia, joined the demonstration in Dublin city centre.

“I think that Russia has made a big mistake, to kill Ukrainian people.

“They need to solve their own problems.

“We don’t need to have war in this good country.”