In this special Longford Leader MOMENT IN TIME GALLERY, we feature a selection of photographs and the match report from the Masita GAA All-Ireland Vocational Schools Senior Football 'A' Final where Cnoc Mhuire Granard recorded a famous 2-13 to 2-12 victory over Holy Trinity College Cookstown in Croke Park on Saturday, April 13, 2013.

We hope you enjoy reliving the glory days of eight years ago and don't forget to tag and share with any of your friends that you recognise. 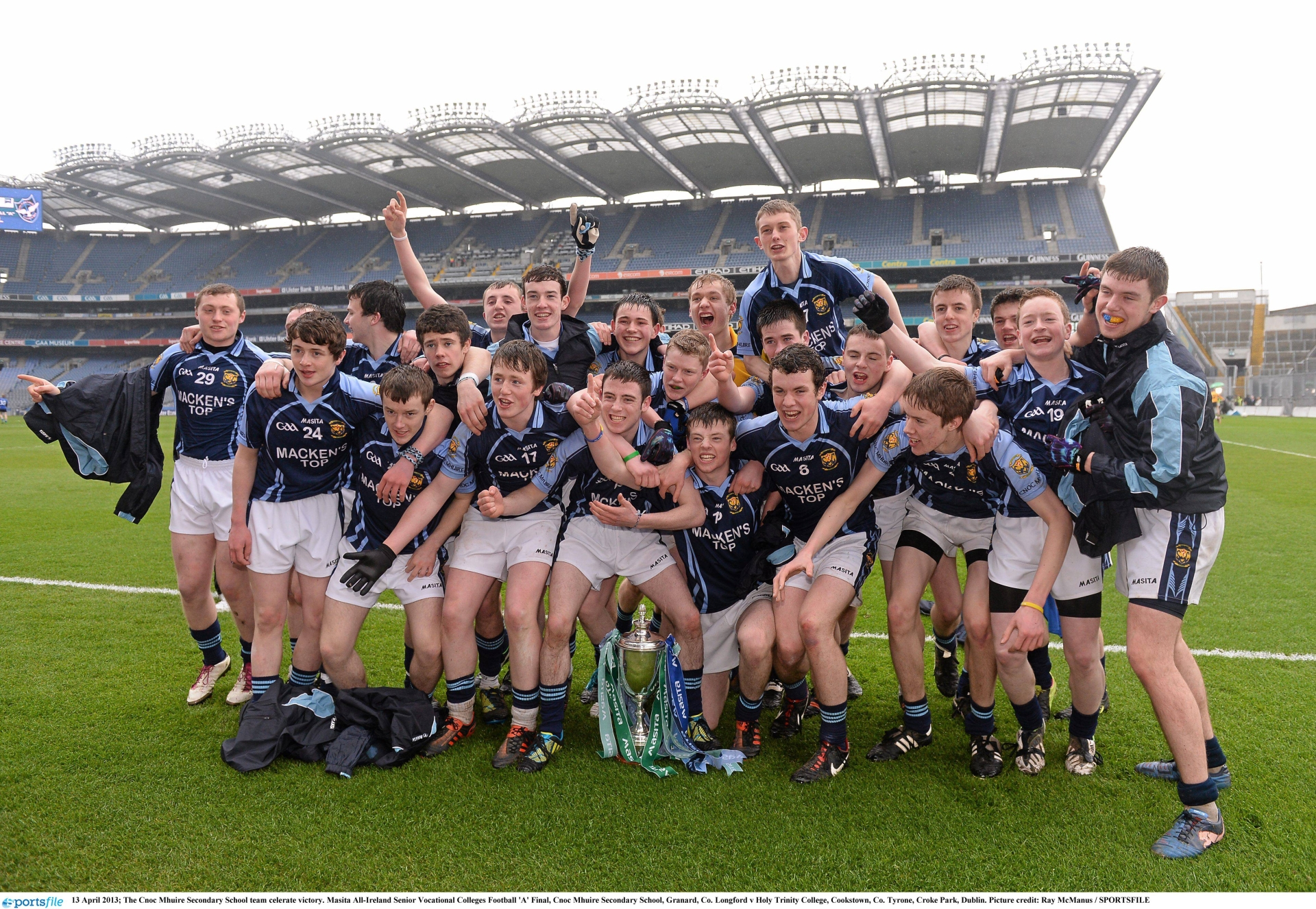 Another glorious chapter in the never ending Cnoc Mhuire sporting success story was written at Croke Park on Saturday, April 13, 2013  as the Granard school were crowned All-Ireland Vocational Schools Senior ‘A’ Football champions for a historic first time and a wonderful win was achieved against the title holders Holy Trinity College, Cookstown who staged a dramatic late comeback in a frantic finish to a highly entertaining final.

For most of this action-packed game played in difficult wet and windy conditions it must be said that Cnoc Mhuire were clearly the superior side, mainly due to their dominance at centrefield where outstanding captain David McGivney was in almost complete command. And with the equally classy Rian Brady causing havoc at corner-forward the Leinster champions had built up a most emphatic nine points lead (2-13 to 1-7) entering the final quarter of the contest and it looked all over.

Down to 14 players after midfielder Aidan McElligott was harshly sent-off after receiving a second yellow card in the 22nd minute of the first half, Cnoc Mhuire showed great courage to overcome this considerable handicap and after leading by 2-7 to 1-4 at the break they surged even further ahead with three points in quick succession through David McGivney (free), Rian Brady and impressive wing back Liam Sullivan in the early stages of the second half.

While the Cookstown school battled back to close the gap with three scores (all from play) through substitute Gavin Goodfellow, Macauley Quinn and James McGahan, a very good point from Fionnan O’Reilly in the 40th minute eased the pressure on Cnoc Mhuire and it got even better for the Granard side with Rian Brady and David McGivney converting a couple of frees, the latter on target in the 47th minute.

The star men Brady and McGivney clocked up a total of ten points between them but Holy Trinity College were not done for yet and a brace of scores from full-forward McGahan (free and play) gave them a glimmer of hope while a goal attempt from centre-half-back Darren Devlin was blocked down by roving Cnoc Mhuire forward Nigel Rabbitte who had dropped back to help out the under pressure defence.

Excellent work from Cnoc Mhuire corner-backs Tadhg McGahern and Isreal ILunga kept the opposing attack at bay before Cookstown got the goal they so badly needed in the 56th minute when a shot from substitute Jason Rocks deflected off the unfortunate ILunga into the back of the net.

That gave Holy Trinity College a huge lift and three points in a row quickly followed from Rocks, Daryl Magee and Ryan Loughran to remarkably leave just the minimum of margins separating the sides with 59 minutes gone on the clock.

Cnoc Mhuire were reeling on the ropes but somehow managed to hang on in capturing the All-Ireland title after Rocks and McGahan missed a couple of great chances of the equalising point for the rampant Tyrone school and their tale of woe was complete when Rocks received a straight red card for a tough challenge on Barry McKiernan in the fourth minute of stoppage time.

The brave McKiernan won the ball to stop the opposition from engineering a last gasp chance of snatching a draw and force the game into extra-time and moments later the final whistle was blown to spark off jubilant scenes on the Croke Park pitch for the Cnoc Mhuire players and their management team.

Ironically, the winning margin of just a point was the same situation in the All-Ireland semi-final and Leinster title decider in the current campaign and when Cnoc Mhuire also won back-to-back All-Ireland Vocational Schools U-16 ‘A titles in 2011 and 2012 they came out on top by just a solitary point on both occasions.

Those U-16 triumphs laid the foundations for the big breakthrough at senior level and manager James Carroll deserves a lot of credit for guiding Cnoc Mhuire to the promised land with the vital assistance of fellow teachers Ryan Plunkett and Owen Swaine who have also been involved with the various successful football teams in the Granard school for the past number of years.

Apart from David McGivney, Rian Brady and Liam Sullivan, others to figure prominently in the All-Ireland final on Saturday last were Nigel Rabbitte and Fionnan O’Reilly who started alongside Brady in a razor sharp full-forward-line who were lethal in the first half.

After getting off to a bad start when Ryan Loughran got the vital touch to score a goal for Holy Trinity College in the 3rd minute, Cnoc Mhuire replied immediately with a cracking point from Rian Brady and a few minutes later a goal materialised when Aidan McElligott finished the ball to the net from close range after connecting with a centre from Fionnan O’Reilly.

Two more fine points (play) followed from Rian Brady along with a free converted by fellow Mullinalaghta clubman David McGivney before the dangerman Brady put Nigel Rabbitte racing through for a very well-taken goal in the 18th minute that left Cnoc Mhuire in a comfortable 2-4 to 1-2 lead.

James McGahan (free) and David Mulgrew got the points for Holy Trinity College and after McGahan converted another free in the 20th minute, Cnoc Mhuire regained the upper hand and a strong finish to the first half yielded three more scores from McGivney (two frees) and a fine effort from Mattie Gorman (play) to leave them 2-7 to 1-3 in front.

But Cookstown almost scored a goal deep into stoppage time when McGivney blocked a shot from McGahan on the line with Loughran booting the breaking ball over the bar and while Holy Trinity College gradually came a lot more into the game in the second half to outscore their opponents 1-8 to 0-6 the happy ending to this superb story is that the All-Ireland Senior ‘A’ Vocational Schools Cup ended up in Granard as gutsy Cnoc Mhuire stuck it out to emerge victorious.