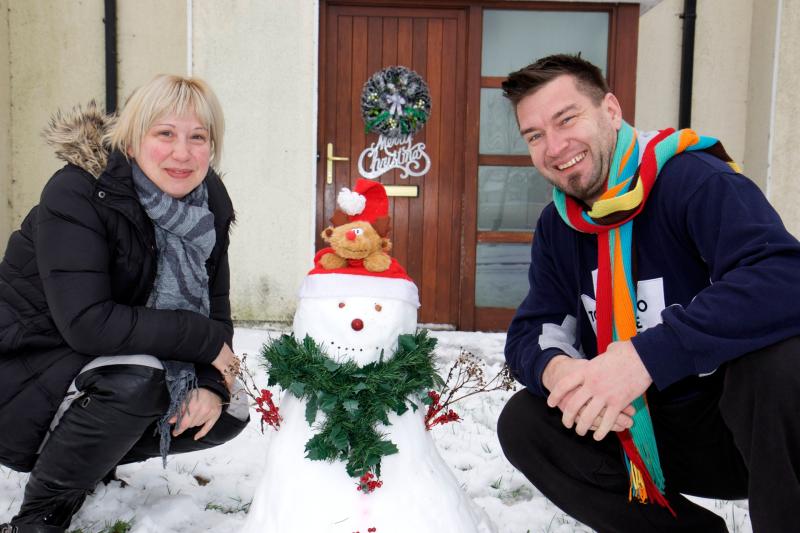 Monika Barna and Janos Papdi with their snowman in Killashee. Photo: Michelle Ghee

As Longford wakes up to the big chill, Met Éireann has revealed that temperatures of -5.1°C and -5.3°C were recorded at weather stations in neighbouring counties, Mount Dillon (Roscommon) and Mullingar  (Westmeath), respectively, overnight.

The forecast for today is for widespread icy roads and paths.

ALERT for widespread icy roads and paths in central and eastern Ireland this morning, with some secondary roads dangerous or impassable in regions that had a heavy snowfall or a sharp frost overnight. Most main routes should be reasonably good with a few exceptions in higher parts of Connacht, but it will take some time for treatment or natural thawing to solve problems on less busy routes.

TODAY ... Somewhat milder in western counties in a northerly flow that is bringing in mixed wintry showers, mostly rain near sea level, sleet or snow higher up, moderate northerly winds, highs 4 to 7 C. Central and eastern counties will be more likely to stay dry with a few isolated wintry showers, some sunny breaks once any freezing fog dissipates (and this could take several hours in valleys over snow cover), and the hard frost slowly dissipates. Highs 2 to 6 C. Widespread icy roads this morning, drive with caution.

TONIGHT ... Occasional light wintry showers, partly cloudy and cold otherwise, lows in the range -6 to -2 C for most but -2 to +3 C in Atlantic counties.

TUESDAY ... Variable cloud, turning milder, intervals of light rain by afternoon, could be sleety on hills, highs 7 to 10 C.

WEDNESDAY ... Turning colder again with mixed wintry showers, moderate and sometimes blustery westerly winds 50 to 80 km/hr, morning lows 2 to 4 C and temperatures steady or rising only slightly to 5 or 6 C.

THURSDAY ... Variable cloud, outbreaks of snow likely, but with some sunny intervals between snow showers, amounts 1 to 3 cms for many and 3 to 6 cms for a few higher parts of Ulster and Connacht. Very cold, morning lows -2 to +1 C and highs only 2 to 6 C. Moderate west veering to northwest winds stronger near Connacht coasts where gusts to 90 km/hr may develop later in the day.

OUTLOOK ... Most guidance shows a milder trend in southwest winds, although it may take one more slight battle between cold and mild air over the weekend of 16th and 17th to establish this trend. First looks at Christmas holiday charts show a rather stormy (mild) pattern, hoping that will change as Santa prefers it calm and crisp.