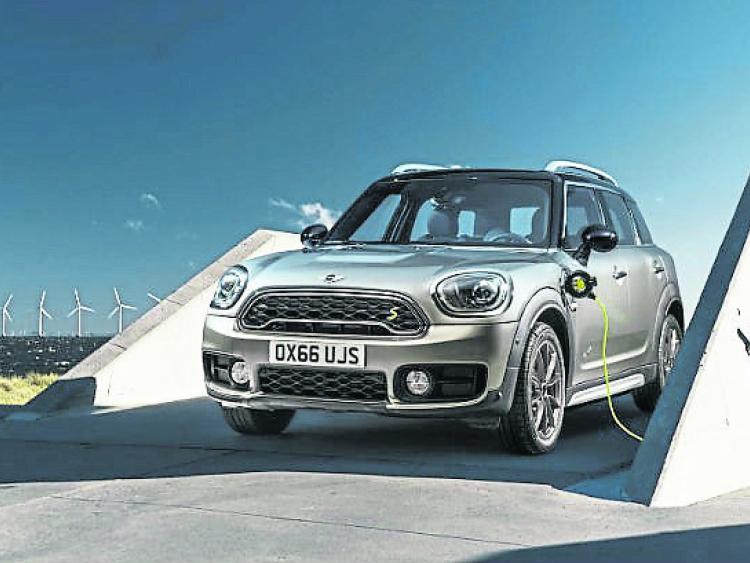 Meet the new Mini plug-in Hybrid. This is the first plug in hybrid in the Mini range and is currently available in the shape of the Mini Countryman with all wheel drive.

The success of the Mini is unquestionable. VW with the modern Beetle have not managed to capture the hearts and minds of car buyers as has the Mini.
There have of course been many incarnations of the Mini, from convertible to coupe, and now we have the guilt feee eco friendly version.

Has it any street cred?
Well its a Mini so yes of course! In Countryman style its no “Mini” in she terms. This is quite a substantially proportioned vehicle. Essentially its a Crossover and Mini hope to steal the march on rivals with this hybrid version.
It looks like a Mini on steroids, bigger, broader shouldered and taller, but it still manages to look great.

What’s it like inside?
The cabin is very roomy, with ample leg and headroom both front and rear, and quite a decent boot too. Its packed with goodies too numerous to mention here, but some cool features include the Mini driving modes with “Sport” also available in addition to mood lighting which is fully changeable, the rather nice aircraft style toggle switches finished in chrome, the natty starter switch and of curse the large round central screen which although nowadays packed with things like sat nav and other multiple functions still looks like the original idea in the Mini of the sixties.

What is under the bonnet?
This Mini boasts a petrol 1.5 litre 134 bhp 3 cylinder petrol and an electric motor.
As its a plug-in hybrid it can be charged up at home giving an average range of about 40km on a full charge after which the 1.5 petrol engine kicks in.
The petrol engine drives the front wheels while the electric motor drives the rear wheels. Depending on driving conditions drive goes to either the front two, rear two or all four wheels seamlessly and automatically. The 8-speed automatic gearbox is very smooth with well chosen ratios.
In Auto E-Drive mode the car switches automatically between petrol and electric power or both f the situation demands it. I must say it performs really well. In electric mode it cruises along in silence and manages plenty of punch if you need it. The sound from the 3 cylinder petrol is rather nice. Road tax is €170.

Will I enjoy driving it?
The ride is good and set-up primarily for comfort rather than say sporty handling. You do notice the weight of the extra motor and its associated running gear and in that way the handling is somewhat dulled from the go-cart like sharpness of a “normal” Mini. Nonetheless though it does not deliver a rewarding drive.
Refinement levels are good however at higher speeds I did feel there was somewhat more wind noise than I would like. My test car had the Panoramic glass roof option and maybe that contributed to it?

the final verdict?
I really liked the new plug-in hybrid Mini Countryman! It has bags of character that we all associate with the Mini brand. Its a big substantial car for a Mini but it still looks great. The hybrid technology is practical and really does offer a real range of about 40km max which means city driving can be carried out almost entirely in electric mode its very well kitted out and has lots of funky detailing which Mini buyers love. Its a car with flair, character and style. So whats the catch I hear you say? The Mini Cooper S E All4 PHEV Cpuntrymn costs €43,300! My test car with options such as the Panoramic roof and much more topped out at €51,740 - seems a lot for a Mini!