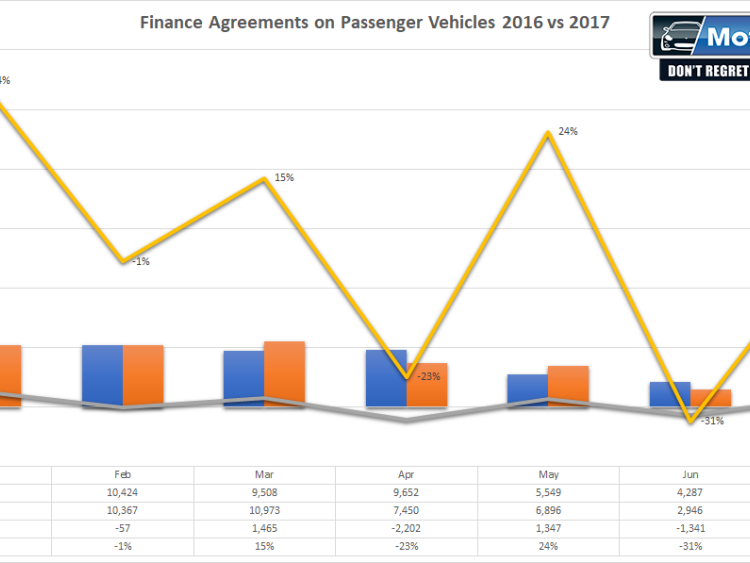 The latest Car Finance Stats released today by car data experts Motorcheck.ie show that New Car Finance has increased by 139% over the past 3 years.

Whilst car finance statistics do not distinguish between Hire Purchase and PCP agreements the market has definitely witnessed a sharp increase in Car Finance in general over the past 3 years.

This is positive for the Motor Trade as it has helped fuel the increase in new car sales over the past three years. Despite recent publicity it is also positive for the consumer as it has allowed many people to enter into flexible finance agreements at low monthly payments.  Like any finance agreement, however, the consumer must ensure they fully understand the terms and conditions before they enter into the agreement.

Commenting on the figures, Michael Rochford, Managing Director of Motorcheck.ie said: “There has been a lot of scare mongering recently regarding PCP finance. A lot of it is unjustified, and I’m sure the industry will welcome the study undertaken by the CCPC into PCP. Anything that will help the consumer to fully understand PCP as a finance product will also help to strengthen the confidence of those customers who are suitable for this type of product.

"There is no doubt that PCP won’t suit everybody, but it’s actually a very good product for people with a predictable budget who want to change their car every three to five years. It has been around for many years in the US and the UK and is the primary source of car finance in those markets. They key for any consumer is to ensure you understand all of the terms and conditions”.

The CCPC recently announced a study into PCP with Fergal O’Leary, a member of the CCPC saying: "We do know that it's a good deal for garages, what we want to find out with this study 'is it a good deal for consumers?”.

Actually, if used cars depreciate more than the expected Guaranteed Minimum Future Value (GMFV) it is not such a good deal for the Car Dealers, Manufacturers and Banks since they absorb the risk in the GMFV, thereby protecting the consumer from market price fluctuations.

For example, if the GMFV of a vehicle after 3 years is €10,000 but the market value of that vehicle has actually depreciated to €9,000 the consumer has the option to hand the car back to the Dealer without penalty, assuming all of the other terms have been adhered to.

Commenting further on the analysis, Rochford said: “One of the main pieces of advice I would give is ensure you save a little for the deposit on your next PCP whilst paying off your existing PCP. This way you will be able to enter your next PCP on similar terms to your previous one, if that is your preferred option.

"Of course consumers also have the option to purchase the vehicle for the stated GMFV at the end of a PCP, so if the market has shifted the other way and the GMFV is less than the market value of the car the consumer can benefit from this positive equity by purchasing the vehicle outright, or by refinancing it themselves.

"In addition to all of this, given the rise in popularity of car finance over the past few years in both the new and used car sectors we would remind consumers that it is doubly important to ensure you check the history of any used car before you purchase. This will ensure that you are not buying an asset that actually belongs to a financial institution and the seller has the right to pass legal title to you as the buyer.”

Meanwhile in the Used Car Market the rate of vehicles on finance is also on the increase. In the three years from 2014 to 2016 the rate of used cars financed has increased by 72%. The first half of 2017 has also shown a 43% increase on the same period last year.