From Kiev to Ballinamuck: Fleeing war torn Ukraine and finding refuge in peaceful and welcoming Longford

Humans of Longford is a catalogue of the people encountered in the everyday ambling of any denizen of the county. Curated by Tiernan Dolan it's in free form, with the subject leading the reader experiences of their life.

With over 24,000 likes the ability of the Facebook page to connect with people is well acknowledged.

The page captures the past, the present and even the future of Longford. A recent post draws on how world affairs encroach on our little county on the fringe of Europe. 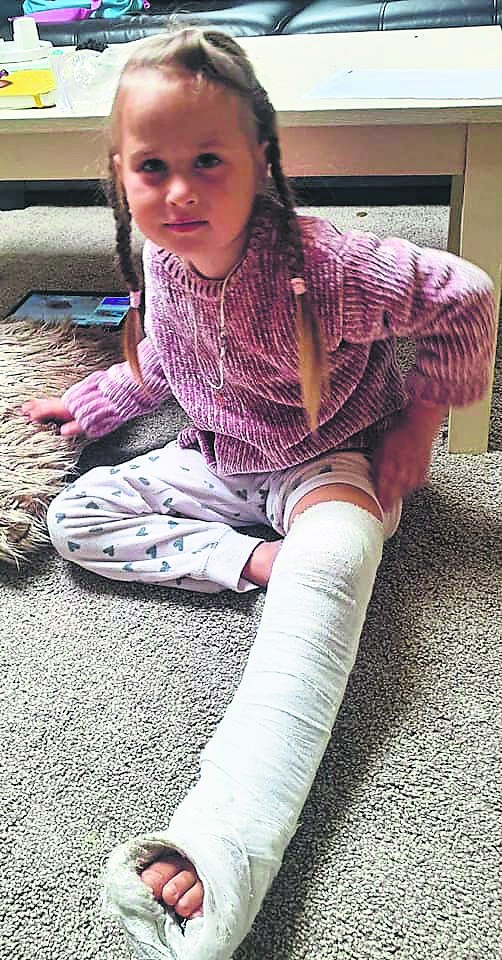 While every Irish person has been affected by the war in Ukraine for some recent additions to our community this infringement is more than an impact on the cost of living.

Little Arina Plinokos is a fine example. In a Humans of Longford post featuring an image of a little girl in a leg cast she says: “Hello - my name is Arina, I am four years.”

She tells the story of her flight from Kiev to Ballinamuck where she and her family now reside with Peter Dillon, “he is very nice and kind to us” Ariana tells.

The details of her story capture the horror of war: “One day the Russians came to my city. Mammy and Daddy said we had to run away. I was not happy, I was scared a lot.”

“I was in the back of our car. I was crying because other cars and trucks were in flames, a lot of black smoke and high flames and a smell that made me feel sick.”

Arina's experience of the horrors of war are vivid and compelling: “I remember a helicopter in the sky, it started firing rockets at us. Daddy stopped the car and we all ran to the forest.

"It's really hard to describe all that, crying, hungry, tired, and sore. I just wanted to go home, and it was cold, cold, very cold. A lot of white frost. It was February.”

The child's recollection of her horrific injury is heart-rending: “We hid in a small house. Mammy melted the snow to make water, there was no heat at all. One day, a terrible thing happened to me, it's hard to remember exactly, just suddenly I found myself trapped under a large fence.

“I could not move, the pain was terrible. My brother Kiril, he is eight years old, and some boys tried to lift the fence, then Mammy came running. Mammy put me in the car, on the road ,she stopped an ambulance but the ambulance men said my leg was too smashed to move me into the ambulance from the car.”

The four year old recalls: “After a very long time, we got to a hospital in Kyiv. They put me in a big caste. Daddy had to carry me everywhere. My only entertainment was a roundy flat swing, but every time I went on it there were air raid sirens so Daddy had to lift me off again and hide in the basement from the Russian bombs.”

When Arina's kindergarten and the school beside it were destroyed the family made a decision: “Mammy and Daddy said we had to leave our country because everything was too much, impossible and dangerous.

“When we got to this new country there was no war, no bombs, just silence. Everywhere was quiet, no more war. Peace all the hours, silence. I was not scared any more.”

Arina received treatment for her broken leg in Tullamore Hospital: “They were very nice and smiling a lot. They said I will soon be back to what I was before, then I was smiling too and happy.”

The young girl is settling into her place of refuge: “I like Ballinamuck, the people are very nice. I like to visit the farm, I really like the donkey the most. It's the first time I saw a donkey, he has big ears. I am happy but I have dreams of my real home in my country.”

In the post Tiernan acknowledged the permission and cooperation of Arina's parents and the help of Svetlana Babak who provided the “incredibly patient” translation.