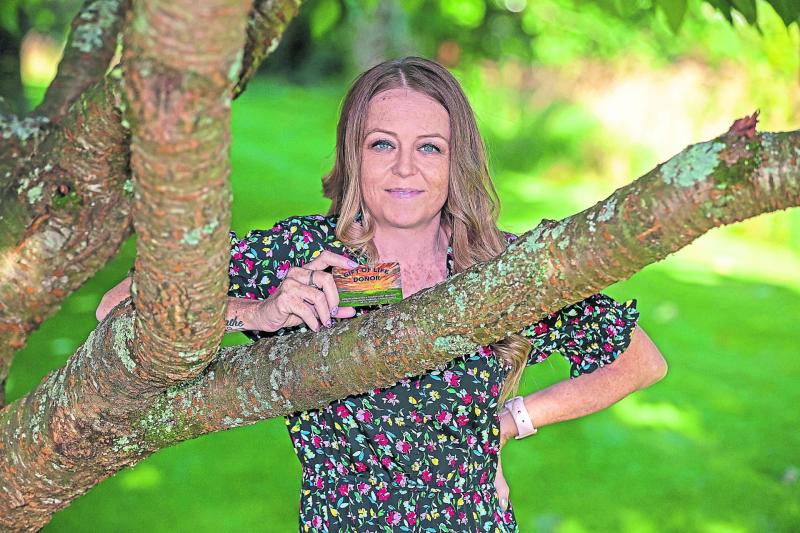 Three years is a long time in most people's book, but for cystic fibrosis campaigner Jillian McNulty it has seemed a nigh on eternity.

It's a period in time the Longford native has spent large swathes of confined to hospital on dialysis while awaiting a potentially life saving kidney transplant.

That wait was one which finally came to an end in recent days when Jillian received a life-changing call from Beaumont Hospital requesting her to travel to Dublin without delay after a donor became available.

It was a call the likeable 46-year-old had desparately been longing for, but was one she had unforeseen after only being discharged from hospital following six weeks of dialysis.
“I was after being in St Vincent's (Hospital) and was only after landing in Enniscrone when I got the call at 12:55pm,” she said.

“Myself and mum went up to a coffee shop and I ordered a chicken curry when I got the call.
“I went outside and thought it was about my live donor. But I was told: ‘No, no Jillian, we have a kidney for you now and you need to be here by 5 o’clock’.

The emotion and significance at what she had just heard proved too much for the Longford woman as she broke down moments later.

“I think I cried for about ten minutes on the phone,” Jillian vividly recalled.
“I can’t remember but mum said I ran in and said ‘I got a kidney’ and the whole place heard me.
“I was just thinking to myself 'How will I get up to Dublin in time?'”.

Knowing she had to return home first to collect a bag she had packed in anticipation of surgery, Jillian immediately set off back down the N4 at a speed even she looks back on now with some astonishment.

“On the way back from Enniscrone, I put the hazards on and got stuck in a 4km talkback,” she said.
“I knew I needed to get back as quickly as possible and I just undertook a load of cars on the hard shoulder.”

Having managed to return to Longford in an hour and fifteen minutes, Jillian remained acutely aware that an equally long and problematic journey to Dublin still awaited.

Fortunately for her, Longford Gardaí came to her aid and provided a garda escort to the door of Beaumont Hospital barely an hour later.

“Only for Sgt Gerry Newton and Garda Aiden Lenehan, I wouldn't have got there in time,” stressed the 2017 Longford Person of the Year.

“It was a mad panic, but they were great and when I got back, I just put a few things in the car and we booted it up the road from there.”

As one might expect, there was more than a tinge of anxiety in the air as Jillian's proud, but understandably agitated parents Finola and Francis accompanied their daughter to hospital.
Shortly after 4pm, Jillian arrived and immediately underwent a series of blood tests and x-rays ahead of surgery later that evening.

As it turned out, Jillian didn't actually go under the knife until the following morning.
The best part of three weeks on, the Longford woman could not be in better shape as she continues to defy medics with the speed of her recovery.

“I was up and about on the first day (post surgery),” she said, with more than a hint of quiet satisfaction.

“I would have a very high pain threshold and was up and walking within 24 hours.
“It was something that I knew would see me up and about pretty quick but the hardest part was not being able to eat for two days.”

A keen practitioner of social media, Jillian documented much of her path to recovery on video-sharing platform, Tiktok.

In footage uploaded just 24 hours after her life altering surgery, Jillian can be seen slowly but proudly walking around her ward with minimal assistance.

It was a sight even her own doctors found difficult to comprehend with medics wasting little time in hailing her "immense progress" and ability to shrug off any post operative struggles.
It's a far cry from the dark days of the onset of Covid-19 when Jillian was doing everything within her power to stay virus free in the hope of securing the transplant she so desparately craved.
Those aspirations were dealt a major blow earlier this year when Jillian contracted Covid, forcing medics to take her off the donor list for three months.

“I was at it three years now and thinking I can’t do this for another two years,” said rueful sounding Jillian.
“It was three days up and down (to Dublin). My mum was bringing me up and down and then I was getting sicker and sicker and weaker and weaker.

“My body just wasn’t able for it anymore.”
Now back home, Jillian is already setting her sights on embarking on her next chapter safe in the knowledge the worst of her medical travails are behind her.

Travelling is one item she intends scratching off her so-called bucket list over the coming months with the other very much centred on raising awareness over the importance of organ donation.

“I have to be careful for three months with my recovery, but after that there will be no stopping me,” she bullishly put it.
“I do want to travel and go to the likes of New York, Boston and Iceland though I can't fly for six months.

“I also want to do a fundraiser in honour of my donor and their family because I am just so grateful for the new lease of life it has given me.

“What they did for me was one of the most selfless things anyone can do for someone.”
That overriding sense of gratitude is mirrored by Jillian's take on the value that comes with becoming a potential donor.

“It can't be emphasised enough, it really can't,” added Jillian.
“By signing up, a person can save up to eight lives.
“It saved my life and I intend to live every moment to the fullest.”

After three long and emotionally fraught years of waiting who could begrudge one of Longford's finest ambassadors that chance, a second chance at life you get the feeling she has every intention of fulfilling.