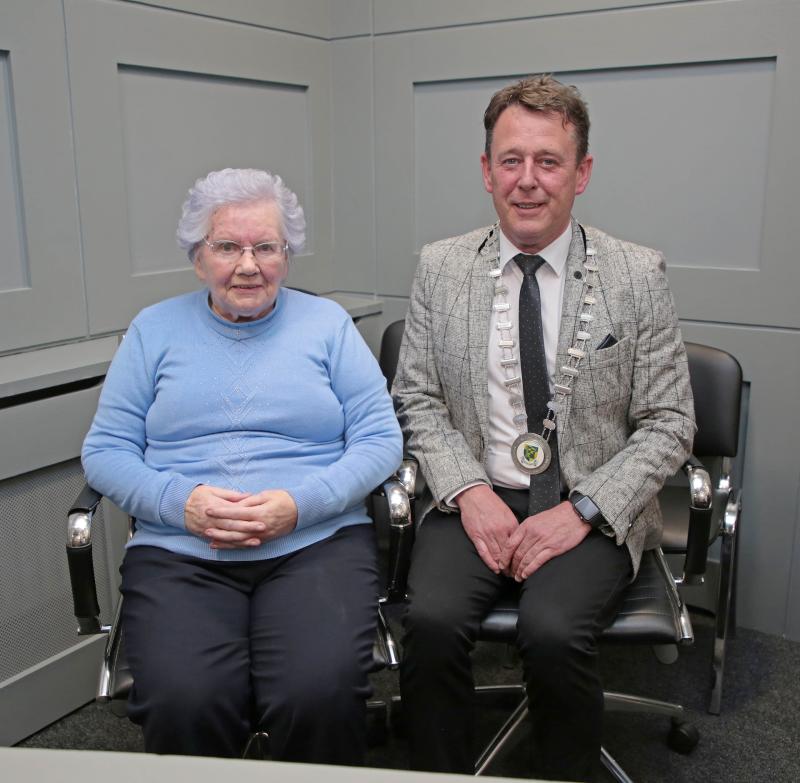 Cllr Gerry Hagan has been elected Cathaoirleach of Longford Municipal District. The Killoe man accepted the chain at an AGM last week, taking over from Cllr Uruemu Adejinmi, who has held the position for the last 12 months.
Cllr Hagan was proposed for the position by his party colleague, Fine Gael’s Cllr Peggy Nolan, and seconded by Cllr John Brown, also of Fine Gael.
“It’s a great privilege and a great honour for me personally to accede to the position of Cathaoirleach of Longford Municipal District,” said Cllr Hagan.
“I’d like to thank Remu, first and foremost, for a year that she carried out her duty with great professionalism and enthusiasm and I compliment her for doing that to such a high standard. I endeavour to do as good a job myself in the next 12 months.”
In welcoming his family, friends and neighbours to the chamber’s gallery, he acknowledged former county councillor, Victor Kiernan, who attended the meeting last week to see Cllr Hagan take the chain.
“Victor sat on the council for 27 years and the man is still going strong,” said Cllr Hagan.
“He’s a great example to us as councillors. Victor is only back from America last week and he was in the Dáil yesterday having fallen off a ladder on Monday morning so that gives me great enthusiasm to maintain this position for as long as I can.
“I’d like to acknowledge the presence of my mother, Rose, here,” he added.
“Mam has gone through a lot in the last three years, so it’s great to see you here today, Mam. I’d also like to acknowledge two of my sisters here.
“Also, at this time, I think of people who have passed, including my dad, who was a very quiet and reserved man - just like myself. And I’m sure he’s up there, looking down.
“And also, my late sister Fidelma who passed away in August last year. She had a great love and interest in politics and I’m sure she’s looking in. She’d probably have something to say from above.
“I’d like to thank the people who came to the public gallery to see this ‘inauguration’ of my Cathaoirleachship of Longford MD.”

Cllr Hagan went on to say how “honoured” he is to take up his new role in the council, stressing that his plans going forward are to promote Longford in a positive light.
“I just want to state that my main aim will be to bring about a positive momentum for Longford,” he said.
“I love this town and I love my county. And I don’t say that flippantly. I grew up here as a kid in the 70s and 80s and I really love the county and the town.
“There is a lot of negative publicity. We hear more negative stuff than we do positive. But I can say that I’m promoting this now in a very positive light because that’s the way we need to look at our town.
“We have big projects ready to start and I hope that during the next 12 months these projects will be started - the Market Square project, the northern quarter, the army barracks which, hopefully will get some education centre in there.
“We’re working on that at the moment. And all of this will bring more positivity to Longford and be a great spinoff to the businesses in our town.
“We have businesses who opened up in the middle of the recession in our street and are now doing so well. Positive thinking is the way forward for Longford.
“I’d like to thank the work of the executive here at Longford County Council, not least Anne Marie. She’s every councillor’s righthand woman and she’s brilliant at what she does. I’d like to pay tribute to her predecessor, Anne Lee, who did such a great job and retired last year.
“I’d also like to thank Paddy Mahon and the directors and all staff, indoor and outdoor, for the support they give us as councillors on a daily basis.
“Finally, I’d like to thank the media for promoting each of our points any time we have press releases or anything. They’re very helpful - both Shannonside and the Longford Leader.
“On that note, that ends my address to you. I’m really honoured to accept this position.”
With that, Cllr Hagan turned to the second item on the AGM agenda, namely the election of a Leas Cathaoirleach.
Cllr Martin Monaghan of Fianna Fáil nominated his party colleague, Cllr Seamus Butler, with their colleague and outgoing Cathaoirleach Cllr Uruemu Adejinmi enthusiastically backing the proposal.
Cllr Butler happily accepted his new role and congratulated Cathaoirleach, Cllr Hagan, agreeing with his sentiments about shining a more positive light on Longford town.
“We really do have to get Longford moving,” he said.
“All the other municipal areas seem to have started projects and finished projects and we seem to be for one reason or another bogged down.
“It’s not for want of us trying. It was Harold Macmillan who once commented when he was asked what went wrong, he said ‘events, dear boy, events’. Well, we’re certainly plagued by events.”
Despite those “events”, Cllr Butler remains steadfast in his determination to help drive Longford forward with the hopeful completion of several local projects over the course of the next 12 months.