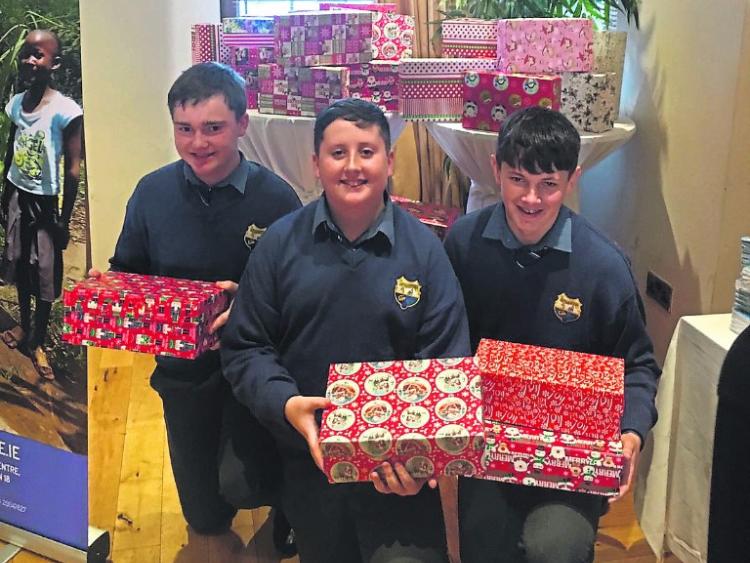 On a dark and dreary Saturday in October the annual Team Hope Christmas Shoebox appeal was launched amid colour, excitement and hope in Hannon’s Hotel, Roscommon.

CSPE class in St Mel’s College decided to support the Team Hope Shoebox appeal as part of their CSPE junior cert project and Alex Sheridan, Iarlaith Dolan and Michael Kiernan were in Roscommon with school guidance counsellor Ms Concar to attend the launch.

Ms Concar is a long-time supporter of Team Hope and the Shoebox appeal and accompanied the event with the St Mel’s boys.

The day was widely covered by local and national TV, radio and it was on TV3’s Saturday AM show. There were volunteers from Team Hope, from different schools in the area and the local community.

The Roscommon Solstice Choir and the choir from Roscommon Community College entertained the crowds.

All were warmly greeted by the Roscommon Roses past and present. It was amazing to see how many people took time out of their day to get involved and help those less fortunate than themselves.

It was a busy morning with workshops demonstrating how to wrap shoeboxes and explaining what items are suitable to be placed in them. There was a great atmosphere there with big smiles all round even though some were in fear of the TV3 AM camera being them!

Michael Kiernan, who attended the launch, explained how to make a shoebox and how much impact sending them has: “You get an old shoebox and wrap the top and bottom separately using brightly coloured Christmas paper so it looks like a Christmas present. The children receiving these boxes probably never got a Christmas present before. Then you take the sticker off the leaflet and decide what gender and age you want your box to go to. Then you fill your box with Christmas gifts for the child. We follow the guideline of the 4 W’s; something to Wash with, something to Wear, something to Write with and something that is a WOW toy.”

Team Hope deliver Christmas shoeboxes directly into the hands of a needy child, irrespective of his or her race, religion, ethnicity, or background – who all equally deserve a shoebox gift.The only criteria for receiving a shoebox is the need of the child.

This year TEAM HOPE shoeboxes from Ireland will go to street children, orphans, children in , poor families, victims of war or other needy situations in the following countries: Eastern Europe and : Belarus, Romania, Transnistria, Kosovo, Moldova, Ukraine, Albania. In they are being delivered to Burundi, Congo, Lesotho, Malawi, Swaziland and Rwanda.

The 3A boys who attended the event got great inspiration from it and when they returned to class they made sure their inspiration was spread throughout the classroom with the help of Ms Concar.

Now the class is working hard to make sure that they donate as many shoeboxes as possible for children around the world that will no other present this Christmas.

If you want to get involved see www.teamhope.ie for all information including leaflets and drop off points.