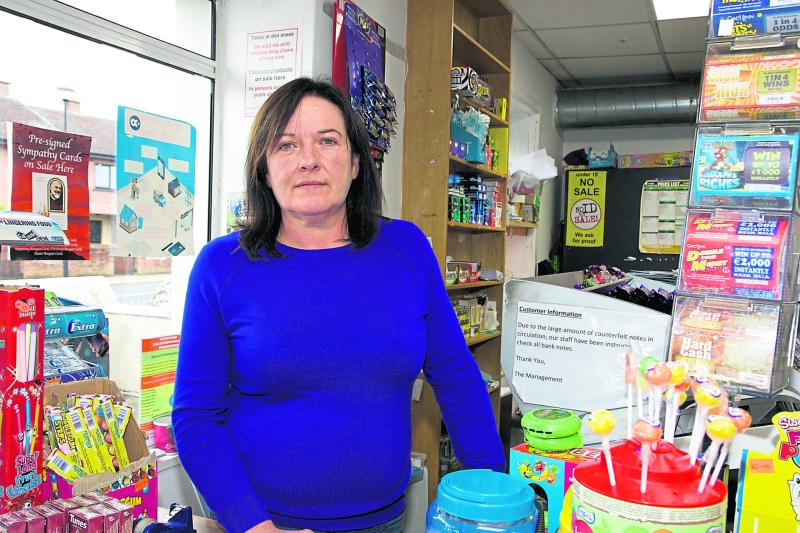 The Finn & Hughes Corner Shop on Park Road in Longford town was robbed on Monday evening by two men wielding a hammer.

The incident which occurred at became terrifying for the lone female member of staff who was threatened with the hammer as the men proceeded to steal the takings from the till and the Payzone. They also trashed the store.

Speaking to the Leader, owner Susan Hussey (pictured) said everyone was “very shook” after the incident.

She had left the young staff member in charge on the evening while she tended to matters for her son who is getting married on Friday.

“The two men came into the shop with a hammer,” said Susan, before pointing out that they subsequently came behind the counter smashed up the till and “terrorised” the member of staff.

“We up; this is a small business and something like this is very disheartening and frightening for everyone.”

Meanwhile, gardaí issued a description of the two men involved, both of whom Susan said Irish.

One of the men is 5’11 in height aged between 19 and 20 years and was wearing a grey tracksuit with the hood up.

The other man is described as being 5’ 9 in height.

It is understood that he wore a black tracksuit at the time of the incident on Monday evening.

Meanwhile, Susan is counting the cost of the damage caused as well as the financial loss.

“The girl that was in the shop on Monday evening was actually helping me out because I was preparing for my son’s wedding on Friday,” she continued.

“All the takings were stolen; the money from the Payzone is gone and there was a lot of damage done.

“The men were violent and aggressive and the staff member was terrified.

“It is very disheartening to see something like this happening.”

Gardaí in Longford town have asked anyone who noticed anything suspicious around the shop or in the Park Road area on the evening of the robbery to make contact with them.

They are currently conducting an investigation into the matter and are asking the public to assist with their inquiries.

“We are an extremely small business here - a little corner shop,” added Susan.

“We are here two years and have lovely customers.

“This is so disheartening.”