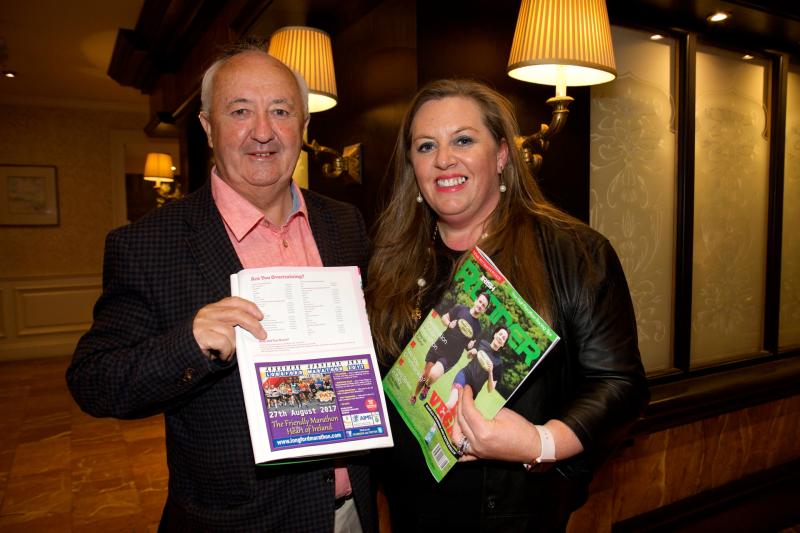 Editor of Irish Runner magazine Frank Greally pictured with Fiona Fenelon at the launch of the 16th annual Pat the Baker Longford Marathon.

The Pat the Baker Longford Marathon took its first steps of 2017 when the official launch was held in the Longford Arms last Thursday. The friendly marathon in the heart of Ireland got off to a good start at the launch.

The Longford event's reputation of high standards and a warm welcome has seen it continue to grow despite the explosion in race options over the last number of years. Master of ceremonies, Tom Maguire, welcomed guests before introducing Chairman of the Organising Committee Fr Ciaran McGovern.

In his address Fr McGovern paid tribute to the sponsors who have been on board for the last eight marathons: “Pat the Baker have been a great friend to the Longford Marathon and have assisted us in putting on a marathon that we are proud of,” the Chairman said.

He recalled the inception of the event in 2002 when a conversation between himself and Liam Fenelon 15 years ago kicked off the idea: “A special welcome to Liam. Without him we would not be here. You have to admire his energy and enthusiasm. He is not only competing, he is winning in his age category!” Fr McGovern said.

The Chairman said that it's important to maintain the standards associated with Longford Marathon in the face of a high level of competition. The value of those standards is reflected in the number of people returning to participate year after year.
“It is exciting times for marathon running. We recently had an effort to break the two hour mark and though it fell just short and did bend the rules of competition we can see that the sport is constantly moving forward,” Fr McGovern said.

The chairperson said that the work of stewards, water station assistants, pacers, Gardaí, civil defence, council workers and sponsors all contribute to making the Pat the Baker Longford Marathon possible.

The Chairman said that the support of the main sponsor, Pat the Baker, has given in the last seven years has been crucial for the continued growth of the event.

He said: "We are very lucky to have a fantastic sponsor with a significant local and national profile. Pat the Baker has been very helpful since they got involved in 2009."

Addressing the gathering Michael Meaney of Pat the Baker said that the marathon is of value to the county as it puts out a very positive image of Longford. Mr Meaney said that the Granard based company was delighted to be in a position to offer continued support to the Longford Marathon.

Michael said that Pat the Baker's continued involvement was made easy by the friendliness of all involved and that he was looking forward to supporting the marathon in the future in the way that Longford people support their local bakery Pat the Baker.

Cllrs Micheál Carrigy, John Browne and Padraig Loughrey were in attendance at the launch. Addressing the gathering Cllr Loughrey said that Longford County Council saw real value in supporting the marathon. He said it made a contribution on a social and tourism level to the fabric of Longford life.

Cllr Loughrey said that the Longford Marathon has had a fantastic reputation and that it plays an important role in putting out a positive image of the town and county. He said that it was one of the best regarded and that all participants had has a very positive experience and that this was a tribute to the committee.

Representing St Christopher’s Donal Drake said that since 2002 the Longford Marathon has raised a lot of money for the support centre. He said that fundraising was becoming increasingly difficult and that the help and support of the marathon helped provide vital services in St Christopher’s.

Frank Greally, the editor the Irish Runner, said that Longford marathon enjoyed a great reputation: “I have a great affection for the event. I saw it grow from the beginning. It is so friendly and is a marathon run by runners for runners. In an era when there are many marathons run as commercial events it is great to see a run that gives back to the community through its involvement with St Christopher's.”

Over 110,000 marathon miles have been covered on the route of the Pat the Baker Longford Marathon since the first run in 2002. The 16th incarnation of the event is set to cement the reputation with burgeoning interest in the event and the addition of different challenges for participants.

This year Freddy Sittuk will be hoping to achieve his ambition of setting a record for the event, but will have some stiff competition from a large field of serious runners. For others the challenge is completing the course.

This year’s marathon consists of the usual calendar of events. The 39.3 mile Ultra Marathon and Marathon Walk start at 8:30 on Sunday, August 27 and the Marathon, Half Marathon and Relay Marathon all start at 10am.