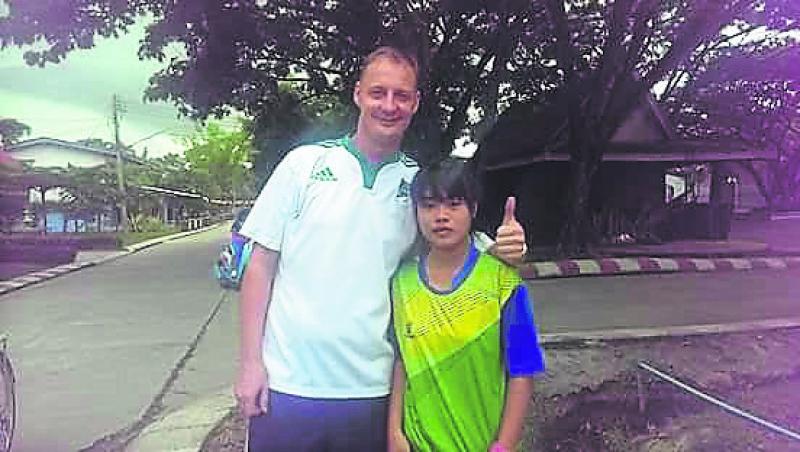 The late John Malone pictured with one of the many students who looked up to him.

A young Longford man killed in a car accident in Thailand last week has been described as a “charming, kind-hearted” son and brother who will never be forgotten.

A ceremony for 38-year-old John Malone from Longford town was held in the northern province of Chiang Ri on Monday, six days after a single vehicle car crash claimed his life.
He had been the front seat passenger in a black Suzuki which spun out of control and crashed in the northern province of Chiang Ri last Tuesday night (June 20).
Three other people, including the driver of the car, were all injured and hospitalised but are expected to make a full recovery.
Mr Malone had been working as an English teacher at the locally based Learning Centre, Chiangrai, a position he had held for the past three years.
A moving tribute and video to the much loved and respected Longford man was posted on the centre’s website hours after news of Mr Malone’s passing filtered through.
“We have lost today one of our beloved teachers, John Malone,” it read.
“John was at the heart of TLC team, helping in every way with his usual smile and happy attitude. You will always be in our hearts. RIP John.”
Those comments came not long after students surprised the outgoing Longford teacher with an impromptu celebration to mark his 38th birthday.
In a poignant message which Mr Malone relayed soon afterwards and which his family have released to the Leader, the former St Mel’s student told of the deep affiliation he had for his new found adopted home.
“Thanks everybody for the birthday wishes, although I'm on the other side of the world it really is great to feel the warmth of good friends.
“I'm really enjoying doing something meaningful with my life and I'm lucky enough to have made new friends and a place to call home here... I hope you all are enjoying whatever your doing in life wherever you are, remember the most important thing is to be happy... Happy Mind Happy Life.”
His heartbroken sister, Gertrude said the family were still coming to terms with last week’s tragedy, indicating a memorial to mark her brother’s memory would be held in Longford at a later date.
“My chatty, charming, kind-hearted brother loved life and loved teaching,” she said.
“He had made Thailand his home, and found the place where his restless soul was content.
“His dad, sisters and brother, his niece and nephews are heartbroken as are his many friends in Longford, Dublin and Thailand.
“A memorial will be arranged in due time but we do want to thank the community here who have been so kind.”
The late John Malone is predeceased by his mother Patricia and is survived by his father Cyril, brother Brian, sisters Gertrude and Karen, niece Milana, nephews Eoin, Oran, Riley and Cayden.