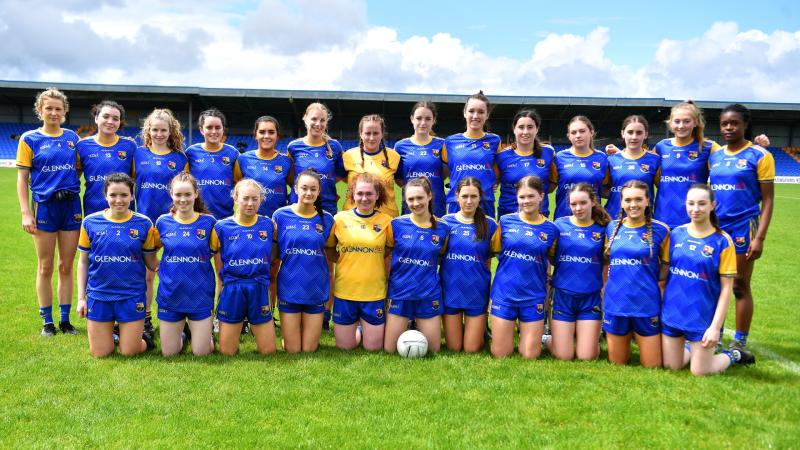 Longford minor ladies qualified for the Leinster ‘B’ championship final following a terrific win over Laois in Glennon Brothers Pearse Park on Sunday.

The Longford girls overcame an early 0-4 to 0-0 deficit to run out comfortable winners thanks to four crucial goals during the course of this entertaining encounter.

Pat Tiernan’s team now face Dublin in the provincial decider on Wednesday evening next, July 6, and can certainly look forward to that game with confidence on the basis of this impressive performance.

Once Longford found their stride, they played some excellent football and scored freely.

The goals came from three different scorers, underlining the attacking talent at the disposal of the management team which also includes Paddy Ganley, Mairead Reynolds, Liz Heaney and Ronan Gallagher.

Mairead was unable to attend, as she had the small matter of lining out for the seniors against Clare!

Kate McEntire scored two of the goals, with the excellent Kate Shannon and the lively Ella Duggan netting as well.
With the seniors being knocked out of the All-Ireland Intermediate Championship on the same day, this win provided a great boost to ladies football in the county.

Laois settled the quickest. Points from Kate Donoghue and a brace from Tara Byrne gave the visitors a 0-3 to 0-0 lead.
Emma Hickey added another to increase the early advantage for Laois.

A shot on goal from Longford’s Anna Hayden was blocked by the opposing ‘keeper Aoibhe Brennan in the 5th minute.
The Longford defence were under early pressure but good work from Rachel Fallon and Funmi Talabi helped to stem the tide. Talabi tracked backed brilliantly to intercept a Laois attack in the 8th minute.

The Mostrim girl was solid all day. Elle Lynn got Longford off the mark with a good point from play in the 9th minute and Lynn followed up with another point moments later. Kate Shannon reduced the deficit to one with a point in the 12th minute.

Longford grabbed the lead when Kate McEntire found the net midway through the first half, her powerful strike beating Laois keeper Brennan. A foul on Anna Hayden resulted in a free converted by Megan Glennon in the 24th minute.

Laois responded with points from Kate Donoghue (free) and Amy McKane to leave it 1-4 to 0-6 in the home side’s favour.
Sarah Macken sent over a free to increase Longford’s lead and this was quickly followed by a second Longford goal.

Kate McEntire struck brilliantly from some distance out to give Longford a five-point lead, 2-5 to 0-6. However, Laois responded instantly with a goal from Tara Byrne.

But Longford had the final say in the first half, with Kate Shannon finding the net, making it 3-5 to 1-6 at half-time in the home side’s favour.

Laois started the second half brightly, with points from Shannon Fitzpatrick and Kate Donoghue (free). Longford responded well, with Ella Duggan finding the net in the 40th minute.

Kate Donoghue responded with a point from a free for Laois in the 41st minute. Following a foul on Sian Gallagher, Kate Shannon sent over the resulting free.

Longford now led by 4-7 to 1-9. Anna Hayden added two points from play to increase the lead to nine points.
Kate Donoghue got a point back for Laois from a free in the 53rd minute. However, there was to be no Laois comeback with Longford adding two points from Kate Shannon (one from a free).

Kate Donoghue, who battled away for Laois, scored their final point of the game, another free, in the closing stages.
Caoimhe McCormack played a captain’s role for Longford, with a strong performance in defence.

The midfield pairing of Ella O’Reilly and Sian Gallagher worked hard throughout. The powerful No.11 Kate McEntire was a constant threat as was the top scorer Kate Shannon.

Given that there was a fixtures clash with the seniors for this minor game, hopefully there will be a much bigger support for the girls for the Leinster Minor ‘B’ final against Dublin next week.