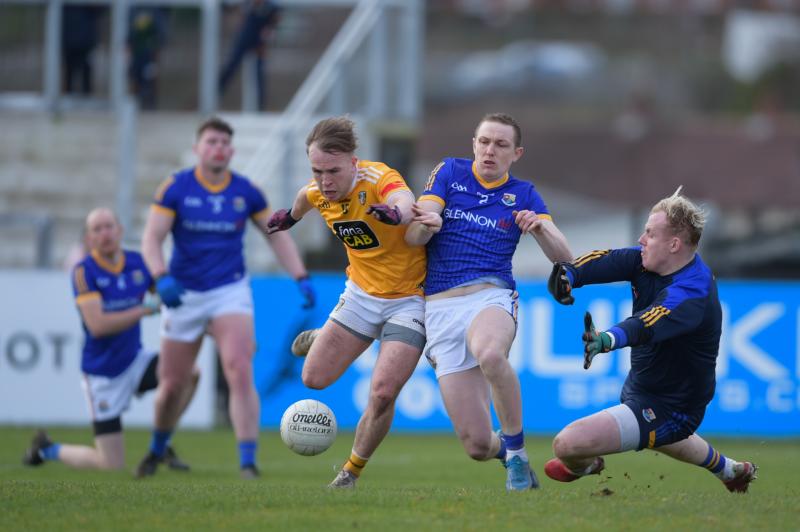 Longford’s desperate battle for survival in division 3 of the Allianz National Football League goes on after they succumbed to a heavy ten points reversal, 1-19 to 0-12, at the hands of Antrim in blustery Corrigan Park, Belfast this afternoon.

Minus the injured Mickey Quinn, Longford never really got into this encounter and they were on the backfoot from the very start.

Thomas McCann blasted home an opening minute penalty for Antrim and the wind assisted home side enjoyed a commanding 1-11 to 0-3 half-time advantage as Longford, who failed to score from play during that opening 35 plus minutes, simply couldn’t get a foothold.

Things didn’t get any better for the visitors in the second half, although a late flurry of points did see them ‘win the half’ by 0-9 to 0-8.

The victory sees Enda McGinley’s Antrim climb to the top of Division 3 table on seven points, however, Limerick could reclaim top spot in a matter of hours as Billy Lee’s team play host to Westmeath at 7pm this evening in the TUS Gaelic Grounds.

After the high of getting over neighbours Westmeath seven days earlier, this defeat leaves the spectre of relegation to the basement division looming large once again over Billy O’Loughlin’s men.

They’ve managed three points from a possible ten and their closing assignments against Wicklow and O’Loughlin’s native county Laois are of massive importance in terms of the battle to preserve Division 3 status.

A senior figure from a Longford based organised crime gang has been arrested by Criminal Assets Bureau officers on suspicion of alleged money laundering offences, the Leader understands.

Playing against the strong wind, Longford, who started without the injured Mickey Quinn and Dessie Reynolds, got off to a dreadful start and inside 12 minutes the visitors found themselves trailing by seven points, 1-4 to 0-0.

Thomas McCann drilled home an opening minute penalty, the second consecutive tie that Longford had conceded a penalty in and it was the 9th goal conceded of this league campaign. Points followed from McCann, Conor Murray, Ryan Murray and Ruairí McCann as the Saffrons, managed by Enda McGinley, made their superiority tell on the scoreboard.

Longford got off the mark in the 14th minute as team captain Darren Gallagher nailed a free and gave his side a desperately needed score. Marc Jordan restored Antrim’s seven-point advantage, 1-5 to 0-1, before Gallagher was on target with his second free of the afternoon in the 22nd minute.

Antrim then hit Longford with a blitzkrieg of scores, kicking four points between the 24th and 27th minutes, three of them from the boot of Conor Murray and the other from Thomas McCann, 1-9 to 0-2. A pivotal moment arrived in the 31st minute as Antrim ‘keeper Oisín Kerr reacted smartly to deny Longford’s Darren Gallagher a goal.

Longford’s Oran Kenny, a 31st minute sub introduced for the injured Dylan Farrell, opened the second half scoring but fiercely fired up Antrim, playing into the teeth of the strong Corrigan Park wind, were undeterred and replied with points courtesy of Thomas Cann and Ryan Murray, 1-13 to 0-4, with 41 minutes elapsed.

Jack Duggan grabbed Longford’s 5th point in the 43rd minute. Odhrán Eastwood (free) and Jayson Matthews exchanged points before Eastwood made it 1-15 to 0-6 with his second point in the 56th minute.

Antrim, with momentum firmly favouring them, kicked three points in succession through Conor Murray (2) and Shivers giving the Glensmen a thirteen points cushion, 1-19 to 0-9, with 65 minutes elapsed.

Longford, who had Eoghan McCormack sent off after he picked up a second yellow card, ended the match with three points coming from Cian Dooner, Oran Kenny (free) and Jayson Matthews (free) but it took none of the gloss of Antrim’s comprehensive win.