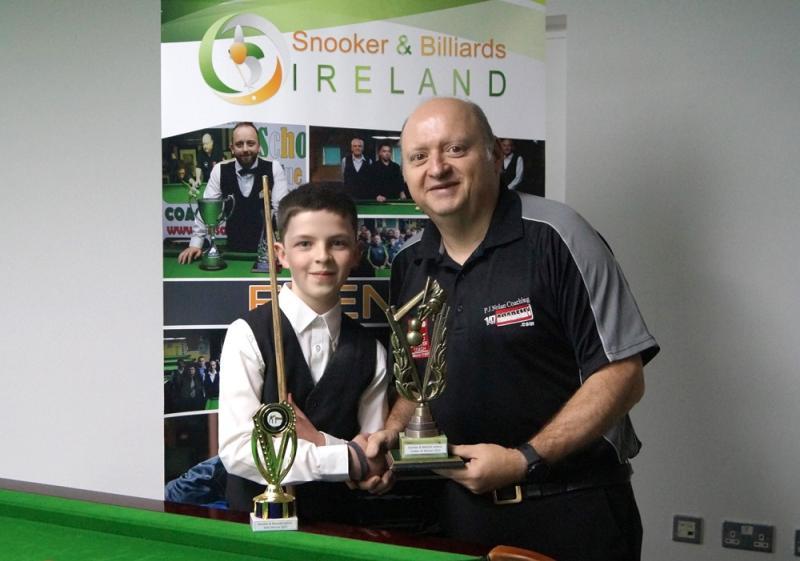 11-year-old Joe Shannon from Kilmore Lower, Longford won the Snooker & Billiards Ireland first Junior U-14 Ranking event of the season in the HQ Academy of Excellence in Carlow on Saturday last.

Son of Damien and Vivienne Shannon, the event was Joe’s first National victory in SBI. In the final Joe beat Max Kennedy from Athenry, Co Galway 2-0 in a high quality match.

The Event Director was National Coach PJ Nolan and this competition was played in groups to give the players vital match practice.

PJ also held a skills event with routines focused on the player’s techniques, control of cue ball and scoring. The event was a big success with the final places only decided on the final routine. When all the points were added up the star of the show was Longford lad Joe Shannon.

National Coach PJ Nolan was very impressed with the attitudes, commitment and overall standard of potting from all the players.

“I am very excited to watch how they will develop in the future and we really have some stars of the future,” stated Nolan.

Event 2 is being held on Saturday the 9th of April in the HQ in Carlow. These events will qualify the elite young snooker players for Celtic Challenge, Home Internationals, EBSA, IBSF International events and it promises to be an exciting season.