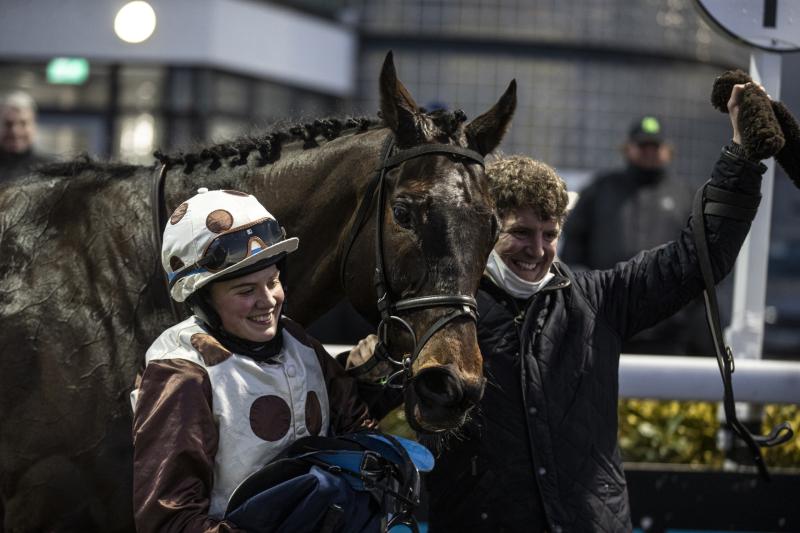 A day after celebrating her 21st birthday, Ciara Flynn partnered her second winner when making most of the running on the John Eastwood-owned Power Drive, trained by her father, Paul, to take the second division of the 10-furlong handicap at Dundalk racecourse last Wednesday.

The same horse had given the Colehill apprentice her first winner late last year.

A delighted Ciara said, “Power Drive is a great help to me. I was taking a look to see if I was going too fast. He hasn’t run for nearly two months and was a bit fresh. We thought he’d run well but he was drawn 15 so we thought I wouldn’t get to the front. He flew out of the stalls and I was able to cut in. It was basically exactly the same as when he won first time, I had nobody around me and I can’t believe nothing got anywhere close to him.”

Meanwhile, Rory Cleary and Curragh trainer Ger O’Leary were on the mark in the two-mile handicap at Dundalk with Adamaris.

The 9/1 chance came from off the pace and swooped late under the Athlone jockey to win by a length from the Tony Martin-trained Nibiru. Adamairs was also successful at the track in the middle of December.

The winning trainer said, “Rory gave him a beautiful ride, we just told him to give him plenty of cover and once he goes for him to make up his mind. He did it nicely enough in the end. We’ll look for another race over a mile-and-six or two miles up here.”