Fantastic achievement for the member of Longford Swimming Club 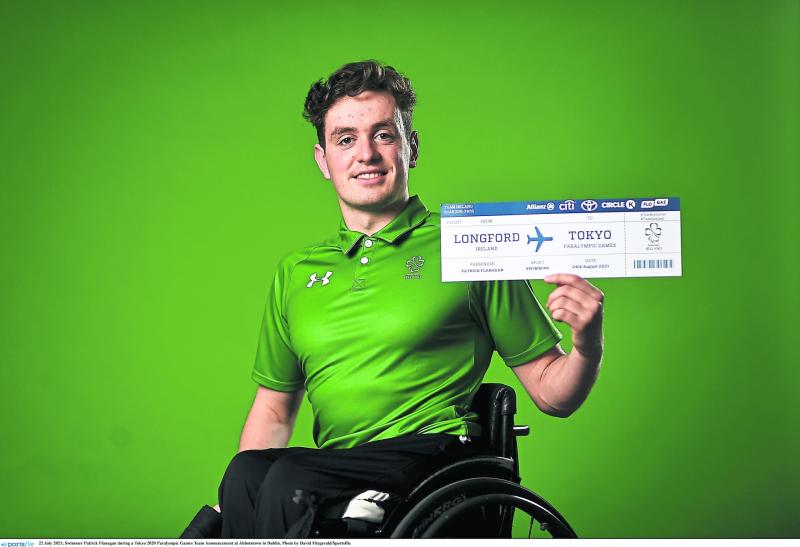 When Patrick Flanagan’s mother taught her young son to swim at the Longford Arms Hotel Leisure Centre, little did she know that years later her boy would compete on a global stage at the Tokyo 2020 Paralympics.

Flanagan fell in love with swimming. Himself and fellow swimmer Gerry Quinn were good friends and that’s how he ended up joining Longford Swimming Club.

He talks fondly about the club. He said: “You have to look back on Longford Swimming Club; what we were doing is so unbelievably right. Myself and Gerry have been friends since.

“I was gutted when he didn’t make it to the Tokyo Olympics but it’s so great to have his support. It’s phenomenal for Longford Swimming Club.”

Although freestyle swimmer Flanagan made the qualifying time for the Tokyo Paralympics well over a year ago, it was a case of waiting for that golden ticket. He got the official word a few weeks back that he was on the plane to Japan.

Patrick said: “There was a sense of relief. It had been 18 months since I made a qualifying time and I was told I was on the plane. It’s relief, pride and elation all rolled into one. It should’ve been three months, not a year and three months.”

The Paralympics get underway on Tuesday next, the 24th of August. Athletes have a disability but they are at an elite level, the best in the World will be in Tokyo.

Flanagan summed it up perfectly: “Acknowledging the disability and celebrating it. Your disability is something that is there, it’s not a defining aspect of you as an athlete.”

The Olympics and Paralympics have lots of similarities but there is a difference.

“For so many with a physical disability to get themselves in this position is such a great achievement. They’re able to get over their disability and get to an elite phase where they can compete on the biggest stage in the World.”

Flanagan was on a training camp in Fuerteventura (Canary Islands) last week before he headed to Tokyo. Five para swimmers are taking part in the games. The aim was always to get to Tokyo, now with that target  secured Flanagan just wants to go out and perform to the best of his ability.

He said: “The aim was always to get there; I’ve ticked that box now. First and foremost I want to enjoy it. I want to take in every single moment. I want to swim a lifetime best and if that gets me to a final, great.

“Ultimately I want to finish the race, look at the clock and be like, that was the best swim I’ve ever done and I gave it everything I had in the tank. That’s what I want to take from it,” stated the past pupil of Mercy Ballymahon Secondary School.