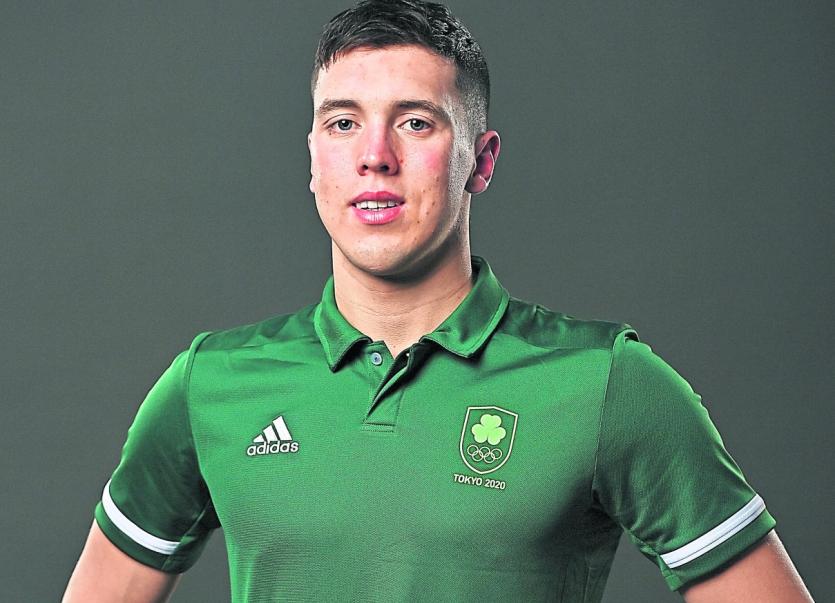 Darragh Greene, swimming for Team Ireland in the 100m and 200m Breaststroke events at the Tokyo Olympics Photo: Seb Daly/Sportsfile

Darragh will dive into the Aquatics Centre pool on Saturday to compete in the heats of the 100m Breaststroke, starting from 12.55pm (Irish time), and should he succeed in qualifying for the semi-finals the former Clonguish underage footballer and hurler will be back in action the following day.

With the eight hours time difference in Tokyo, it will be an early rise for the Greene family from Cartrons in the parish of Newtownforbes to watch the swimming on television.

Proud father Brian and mother Ann, along with Darragh’s sister Aisling and brother Rian, were all planning to be in Japan but the 2020 Tokyo Olympics were postponed last year because of the coronavirus pandemic.

Covid continues to cause severe disruption and pain all over the world but the Olympics Games are going ahead twelve months later with the spectacular opening ceremony this Friday July 23.

Unfortunately, there will be no spectators allowed at any of the events due to the current Covid state of emergency in Japan but the show will go on and there will be many magic moments.

According to Brian Greene, the Olympics Games will always be a massive attraction and he is naturally very disappointed that his family cannot be there to cheer Darragh on.

“It was all systems go last year before the Covid pandemic struck and we were really looking forward to a trip of a lifetime to Tokyo.

“There may be no spectators at the Olympics but it is still a massive global event, clearly reflected in the 1.25 billion in advertising garnered by the NBC channel in America in  surpassing the previous Games in Rio de Janeiro in Brazil,” stated Greene senior.

Darragh departed for Tokyo from Dublin Airport via London on Saturday July 10 and his preparations continued at the Team Ireland holding camp in Hamamatsu.

Greene’s amazing journey moves on to the Olympic Village in Tokyo this week  before the biggest moment in his life when he takes his place in the heats of the 100m Breaststroke in the swimming arena.

The  best breaststroke swimmers in the world will be competing for the 16 places in the semi-finals on Sunday and there is no doubt that Darragh will make a strong bid to reach the next stage of the 100m event.

“Although the excitement is mounting, Darragh is very cool and focused and hopefully things will go according to plan,” stated his dad Brian.

Because the 100m Breaststroke event is early on Saturday, Greene  is unlikely to be parading with Team Ireland at the Tokyo Olympics opening ceremony the previous evening.

Darragh will swim in the heats of the 200m Breaststroke event scheduled for next Tuesday  morning July 27, starting from 11.50am (Irish time).

So where did it all begin for one of Ireland’s outstanding athletes?

“Darragh was just eight years old when he first got involved in the local swimming club  coaching sessions under the supervision of Liam Deely at the old Longford pool on the Market Square.

“Liam recognised that Darragh had a good stroke and the ability to be a natural swimmer and that opinion was later reflected in the U-12 and U-14 Gold medals he won at the National Community Games Finals,” said Brian Greene.

It took a huge commitment from Darragh to get to where he is today and many sacrifices were made along the way.

“When Darragh was woken up at 6am in the morning he hopped out of the bed and was ready to go to the training sessions.

“Myself and my wife Ann shared the duties of bringing him to the local pool and for the many trips to the various Gala events in the Connacht region and beyond it was generally Ann who did the driving,” said Brian.

A scholarship to UCD where he studied Sports Management was a turning point in Darragh’s swimming career and his exciting talent really began to blossom when he finished a fantastic 6th in the 2017 World University Games in Taipei, the capital city of Taiwan.

It was then that he came to the attention of Jon Rudd, the Swim Ireland Performance Director, and that brought about Darragh’s elevation to the professional ranks - funded by Sport Ireland in affiliation with the National Centre Dublin.

Fast forward to the 2019 World Senior Championships in South Korea where the qualification time for the Olympics Games was achieved in some style by the Greene machine who broke the minute mark in a time of 59.76.

Darragh was incredibly unlucky in just missing out on a place in the final of the 100m Breaststroke and there was another agonising twist in the tale for the Longford swimmer at the 2018 European Championships in Glasgow.

Greene lost out in a swim-off against a Russian opponent for a place in the final of the 100m Breaststroke so there has been some bumps on the road to Tokyo.

Darragh is generally regarded as one of the best in his sport, to such an extent that he was invited to join the London Roar professional team who are a truly international selection of elite swimmers from all over the world.

Over a six week period Darragh swam for London Roar in an Olympic style meet in Budapest and he then moved on to represent Team Ireland in the 100m Breaststroke and the Men’s 4x100m Medley relay (7th in the final) at the LEN European Championships in May, also staged in Hungary’s capital city.

Darragh’s parents Brian and Ann have been there every step of the way and it is indeed a great honour for the Greene family to have one of their own competing at the Tokyo Olympics.

“There is a great buzz in Newtownforbes which is decorated with banners, flags and road signs wishing Darragh the very best of luck in Japan and we are immensely proud of what he has achieved in his swimming career,” commented Brian, the former Longford Town FC and County GAA goalkeeper.

Educated in Scoil Mhuire, Newtownforbes and St Mel’s College, the time has come for Darragh Greene to make his first appearance in the Olympics and the member of Longford Swimming Club has brought a tremendous feelgood factor to the county.