Longford's Darragh Greene all set for the Tokyo Olympics 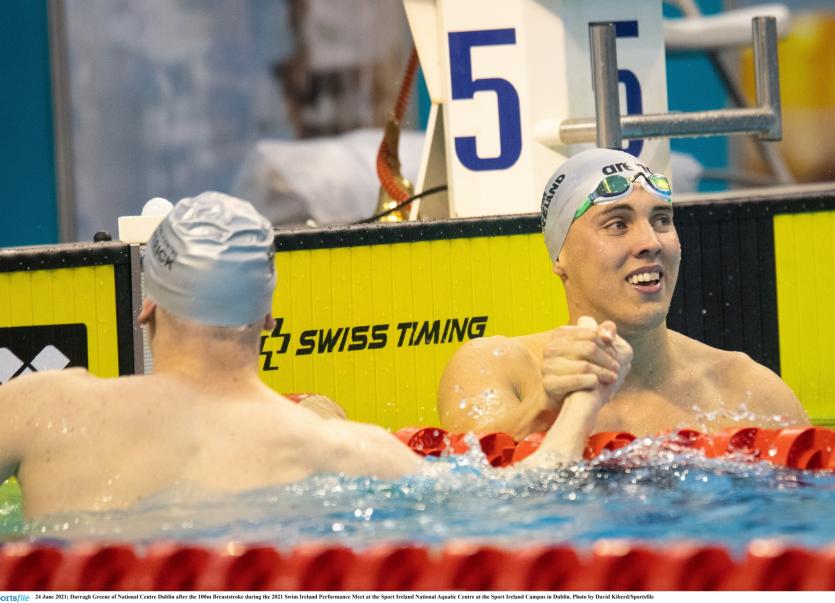 Swim Ireland welcomes the official selection by the Olympic Federation of Ireland of the nine-strong swimming team who will compete for Team Ireland at the Tokyo 2020 Olympic Games this summer (starting on July 23) including Longford star Darragh Greene from Newtownforbes who will compete in the 100m and 200m Breaststroke events in Japan.

Swim Ireland extend congratulations to all of the athletes who will represent Ireland at the Games, and recognise that this is a culmination of the significant efforts that many Irish athletes and coaches have made across the course of the qualification period.

This has been far from a regular Olympic qualification period, with some exceptional circumstances faced throughout 2020 and 2021, and this has required a huge collective effort to ensure that our athletes were given the best possible chances to qualify for the Games, in what was an ever-changing and evolving environment.

Those who achieved a FINA ‘A’ Olympic Qualifying Time in the designated qualification period include Daniel Wiffen, Danielle Hill, Ellen Walshe, Darragh Greene, Mona McSharry and Shane Ryan, and all are selected to the Olympic team as a result. This is the highest number of FINA ‘A’ standards Ireland has ever achieved.

Each of these athletes will swim the event(s) in which they achieved Olympic Qualification Times, with additional individual events also now available to them (see below).

Additionally, Finn McGeever and Jack McMillan have been selected as ‘relay-only’ athletes to compete in the Men’s 4x200m Freestyle Relay – the first Olympic relay for Ireland in 49 years and the first ever men’s relay.

The invitation to compete in the Men’s 4x100m Medley Relay was rescinded by FINA, resulting in Ireland’s ‘relay only’ athlete availability reducing from four athletes to two athletes as part of this process.

Joining them on this relay team will be Brendan Hyland, Ireland’s only athlete to receive a FINA ‘B’ invitation to attend the Games. With no other FINA ‘B’ invites received from FINA, Hyland’s invite was ultimately crucial to Ireland being able to field a Men’s 4x200m Freestyle Relay at Tokyo.

Although it is not Swim Ireland’s philosophy to accept such invites, without this invite, the Men’s Freestyle Relay would not have travelled to Tokyo 2020, with the relay team requiring at least two athletes qualified in individual events featuring within it.

The programming of the Men’s 200m Breaststroke and Men’s 800m Freestyle events immediately before and after this relay made this selection a particular challenge.

The fourth member of this relay team will be Shane Ryan, as under Olympic rules this athlete can only be selected from the three male swimmers on the team who have a FINA ‘A’ time.

As a result, two of the four swimmers whose performances at the 2021 LEN European Championships in May were crucial to ensuring Ireland’s invitation to the Tokyo 2020 Men’s 4x200m Freestyle Relay cannot be selected under Olympic rules.

Without the efforts of Jordan Sloan (Bangor Swimming Club) and Gerry Quinn (National Centre Dublin & Longford Swimming Club), Hyland, McMillan, and McGeever this Irish relay would not be competing in Japan.

Swim Ireland’s gratitude to and respect for these two particular athletes is immeasurable and their contributions to Ireland’s first qualifying relay in 49 years are quite exceptional in both cases.

Jon Rudd, National Performance Director and Team Leader for the Games said: “This has been the longest ever Olympic cycle and qualification period that the sport has faced. To have nine swimmers amongst an 11 member aquatics team for the Games is an excellent outcome for our sport and all those involved.

“A double Trials and a protracted relay appeal meant that many of our athletes have not known until very recently whether they would or could be selected to this team, and for all of the difficult days of uncertainty that they have had to face, we very much sympathise with them, particularly those who did not get over the line on this occasion. I have the greatest respect and admiration for Jordan (Sloan) and Gerry (Quinn) in particular.

“For the nine athletes on this team, there have been numerous coaches, clubs and family members that have been part of the journey alongside all of our athletes and for this, we sincerely thank them. Our attention now turns to our preparation camp in Hamamatsu and our strongest endeavours to see this talented team perform to their best over the nine days of racing in Tokyo.”

More on FINA ‘B’ Invites

FINA invites all FINA ‘A’ time achievers to the Olympic Games. The number of invites via the FINA ‘A’ standard do not fill all the events and once ‘relay only’ athletes are nominated by federations as well as those nations receiving universality invitations, FINA then issue invites to the highest ranked FINA ‘B’ time achievers to complete the places available to them from the IOC.

Brendan Hyland achieved the FINA ‘B’ time in 200m Butterfly and was deemed by FINA to have achieved a high enough ranking to earn such an invitation. It is not Swim Ireland’s philosophy to accept FINA ‘B’ invites to the Games, but without Hyland’s invite, the Men’s 4x200m Freestyle Relay would not have been able to compete due to the timing of two key individual events in and around the relay heats.