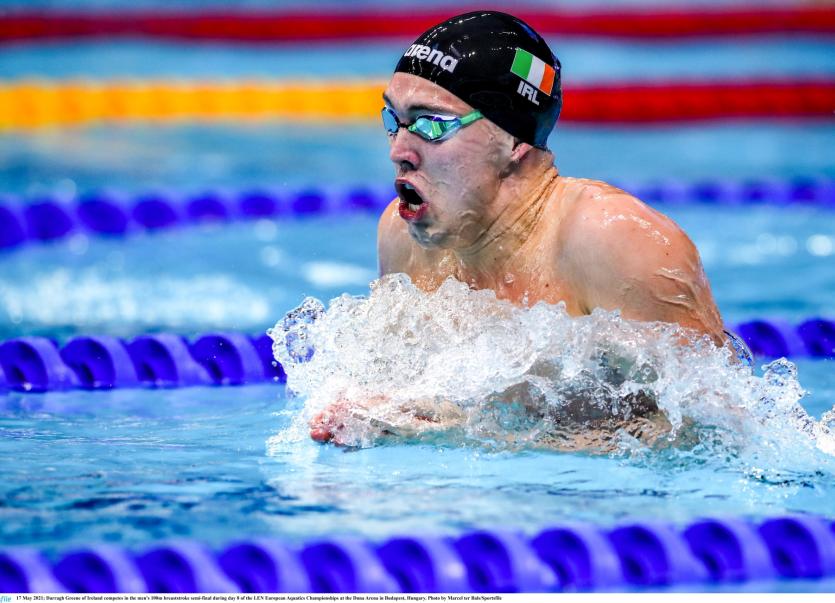 Longford swimmer Darragh Greene, heading for the Tokyo Olympics in July to compete for Team Ireland in the 100m and 200m Breaststroke events

Dates have now been set for the 2021 Swim Ireland Performance Meet, which will be a final opportunity for a discrete number of Irish swimmers to qualify for the Tokyo 2021 Olympic Games.

The event will take place at the Sport Ireland National Aquatic Centre in Dublin from June 24 to 26, featuring individual Olympic events only, with meet entry times set to allow a similar number of athletes to compete at the event as at the Irish National Team Trials in April.

The focus will be on the 10 athletes who came within 1.5% of a FINA 'A' time in April, with these athletes being:

Swim Ireland National Performance Director, Jon Rudd, said: "When the 2021 Olympic Nomination Policy was revised as part of the ongoing COVID-19 circumstances, we foresaw at that time that athletes within the 1.5% of an Olympic qualification standard would travel into Europe to find a meet of their choosing during June as their final attempt at Tokyo qualification.

"With things as they currently are, we concluded that it was much safer in all regards for such athletes to make this attempt on home soil, avoiding international travel, whilst providing an additional qualification opportunity for those wishing to race in the international short course season at the end of this year."

Following the Trials in April, Ireland has five FINA 'A' Olympic Qualification times in individual events:

It is the hope that at least one relay team will join these four athletes later this week when FINA reveals the final Olympic relay rankings, with news expected on Friday, June 4, and Gerry Quinn could be joining Darragh Greene in flying the Longford flag in Tokyo.

Whilst swimming pools will be able to reopen to the public at the time of the Performance Meet, and more sports events will be able to take place than were permitted in April at Swim Ireland's last event, strict COVID-19 protocols will remain in place.

These include the requirement for all athletes, coaches, officials and Swim Ireland staff to produce a negative antigen or PCR test prior to competing, and for all present to wear face masks and remain socially distant at all times they are not in the pool.