Six Longford athletes are named in the newly ratified list of Connacht Athletics records, a list that includes Olympians and several former and current internationals.

Use the Next > above to view the Connacht Athletics Women's Records

Longford comes under the Connacht Athletics Association and is the only county that does not fall in under the traditional provincial structures that exist in the GAA.

The 3:49.77 Irish Mile record, set by Ray Flynn in July 1982, is likely to continue for a 39th year and may well make it to four full decades in existence come next year.

Enda Fitzpatrick’s 1000m run of 2:17.87 in 1986 remains the leading Connacht time and second fastest Irish time ever. Enda is now one of Ireland’s top coaches.

Aisling Molloy is the province’s standard setter among female middle-distance athletes with the fastest times produced over 800m, 1500m and the Mile. Aisling is a 6-time national 800m champion.

Longford’s current crop of top juniors have added their names to the records list in recent years. Yemi Talabi has the Connacht record for the women’s Long Jump for her brilliant 6.02m effort, when she was just 15, to win the 2018 Schools inter girls title.

The most recent record on the list is that of the men’s 800m time of 1:46.13 ran by Cian McPhillips in February. This superb performance achieved both an Irish under 20 and under 23 record and a qualifying time for March’s European Indoors in Poland.

Cian is set to begin his outdoor track season in the 1500m at the Irish Milers Club meet in Belfast on May 29. 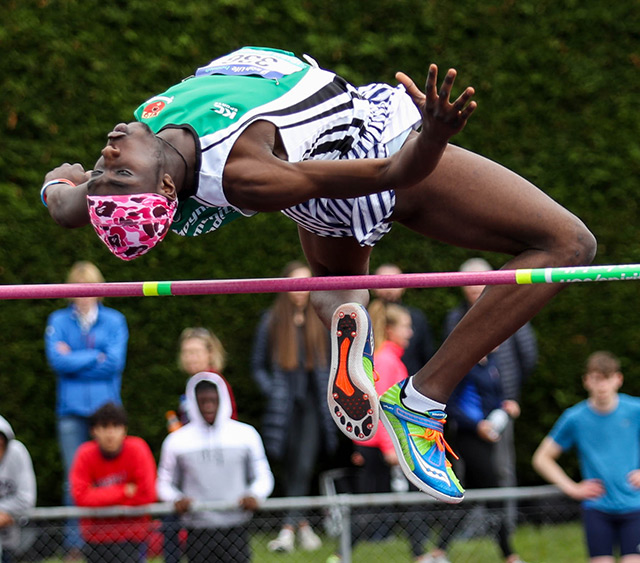 Caption: Nelvin Appiah, in the Moyne CS singlet, jumping his way to gold in the 2019 Irish Schools Senior Boys high jump at a height of 2.10m which is also the Connacht men's record