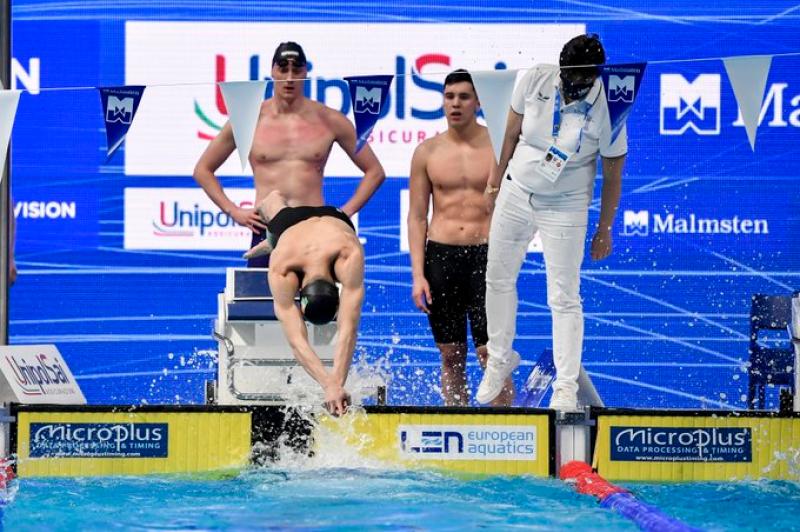 Longford's Darragh Greene (right), a member of Ireland's 4x100m Medley Relay team pictured poolside for the final of the event at the LEN European Championships in Hungary on Sunday evening

Longford's Darragh Greene and the other members of the Ireland 4x100m Medley Relay team produced another brilliant performance to finish 7th in the final of the event at the LEN European Swimming Championships in Budapest, Hungary on Sunday evening.

Shane Ryan, Darragh Greene, Brendan Hyland and Jack McMillan set a new Irish Senior Record of 3:34.62 in the heats on Sunday morning and went under 3:35.00 for a second time to finish 7th in the final in a time of 3:34.88.

Ireland’s goal in the European championships was to qualify an Olympic relay team for the first time since 1972 and they leave the Duna Arena in Budapest having set new Irish Senior Records in every relay event they competed in, including six Olympic relay events – the Men’s and Women’s 4x100m Medley and Freestyle Relays, the Men’s 4x200m Freestyle Relay and the Mixed 4x100m Medley Relay.

There are four remaining spots up for grabs in all Tokyo 2021 Olympic relays and Ireland’s Men’s 4x100m Medley Relay and Men’s 4x200m Freestyle Relay have given themselves a good chance of taking one of those spots.

Swim Ireland’s National Performance Director, Jon Rudd, who was in Budapest, said: “In terms of this final this evening, we were again very pleased to be in the final, amongst the best in Europe, who form the majority of the top teams in the world in this event.

“We were slightly slower than the heats, but have a time in the event from those heats that keeps us in the Olympic frame.”

He added: “Overall, we are exceptionally pleased with how this group of athletes have progressed and galvanised into a unit that has re-written almost all of the Irish Senior Relay records this week.

“Two of our teams must now wait patiently to see if an Olympic invite is forthcoming. Needless to say, I’m a very proud Performance Director.”

Olympic relays qualifying ends on May 31 and news is expected from FINA, the world aquatics governing body, shortly afterwards as to which nations have made the cut.