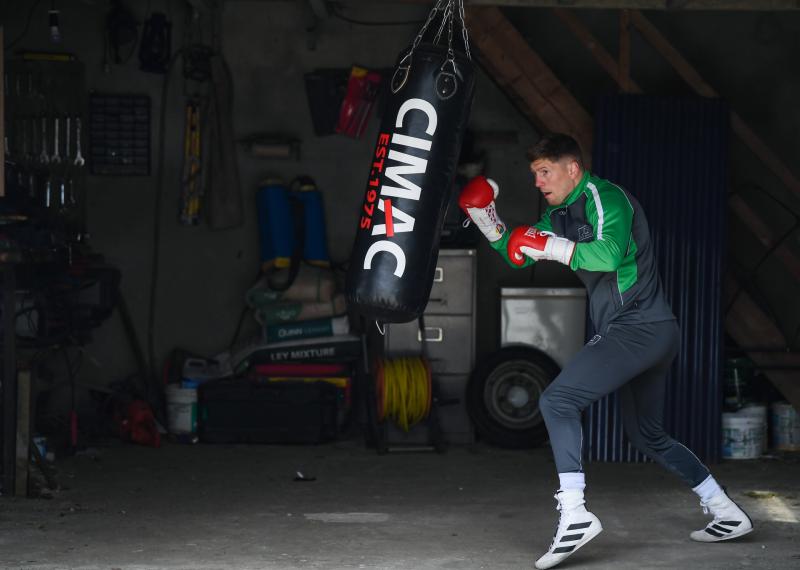 FOCUS: Jason Quigley has worked hard to get his professional career back on track. PICTURE: Stephen McCarthy/Sportsfile

It will be a 'new and improved' version of Jason Quigley that steps on a plane for Vegas this Friday ahead of the make-or-break fight that can put his professional career back on track.

The Ballybofey man, who celebrates his 30th birthday this Wednesday, takes on American Shane Mosley Jr for the vacant NABO middleweight title at the Michelob Ultra Arena In Las Vegas on May 29.

It's been a long road back for Quigley, whose shock defeat to Tureano Johnson in July 2019 saw him relinquish his NABF crown, putting a big dent in his world title aspirations.

With that defeat, the phone inevitably went quiet for a while. But Quigley, who is now being coached by former middleweight world champion Andy Lee, has quietly gone about his business, winning two low-key fights over the last two years to earn a stab at the vacant intercontinental title.

He said: "This is the newer version of me. I've just matured as a person. I've come to realise that the best version of me is going to come when I concentrate on myself and not worry about what everybody else is saying.

"When I turned pro all the talk was, 'when is Jason Quigley going to be world champion?' It was a matter of when rather than if, and that was a lot of pressure very early in my career.

"I was very young then, but I have matured over the years. Now, there's mentally a more significant change in my approach to everything to do with the game I'm in."

And his coach Andy Lee echoed those sentiments, stressing that Quigley's more mature, pragmatic mindset could prove the key to success this time around.

"Jason is the consummate professional," he said. "He's one of the easiest guys to train because he lives the life.
"He gets into the gym on time, eats the right stuff and lives the right way.

"This is a second career for him. He's had that one loss that he would've learned a lot more from than any of his victories. He has suffered from that loss and opportunities were consequently lost to him.

"He's had to work these last two years to get back on the bigger stage. This is the newer version of Jason we're seeing. It's someone who's in control of himself at all times during the rounds, who knows what he's doing and why, and what it leads to."

Victory over Mosley Jr on Saturday week could pave the way for a fight with Mexican super-middleweight star Saul ‘Canelo’ Alvarez.

But it's first things first for Quigley, who is keen to get settled into camp in Vegas this weekend in order to prepare himself for what he knows is a 'must win' fight.

"Shane Mosley is a great fighter," he said. "He will be hungry and determined to win, but there's no doubt in my mind I'm going to get in there and take care of business.

"This fight is very important. I know what it means and what it can lead to.