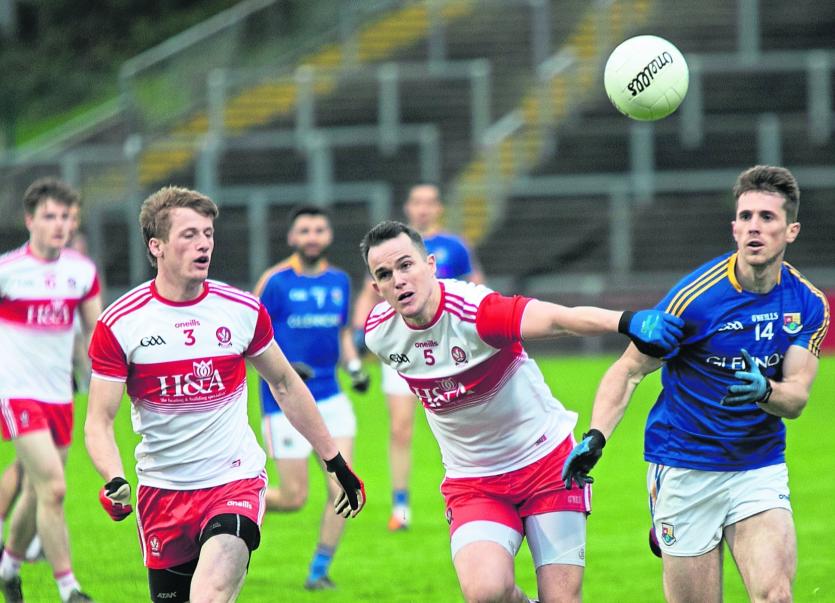 Liam Connerton on the attack for Longford against Derry. Action from the 2020 Allianz National Football League Division 3 game at Celtic Park last October which was won by Derry Picture: Tom Heaney

The long wait is over for Padraic Davis and his players in the countdown to their first competitive fixture since the unlucky loss to Laois in the Leinster Championship quarter-final back in November.

Badly hampered by the Covid pandemic, the delayed 2021 GAA season is finally underway and the ball will start rolling again for the Longford senior footballers in the National League Division 3 North clash against Derry at Glennon Brothers Pearse Park this Saturday, throw-in 5pm.

Boosted by the return of such established players in Michael Quinn, Barry McKeon and David McGivney, the county squad is obviously stronger as the players prepare for a return to competitive action for the first time in six months.

But the Longford manager Davis and his selectors Paul Barden and Donal Ledwith do not need to be told that a result will be needed against Derry to push for promotion with other tough games to come away against Cavan and Fermanagh in the regionalised league.

The top two teams in Division 3 North and South will progress to the semi-finals. The bottom two will end up facing the dread of a relegation play-off against one of the four counties in the other section comprising Tipperary, Offaly, Limerick and Wicklow.

So the message is loud and clear for Longford who will be under considerable pressure should they happen to suffer defeat against Derry.

On the other hand, victory at Pearse Park on Saturday will give the confidence factor a great lift for the clash against the Ulster champions Cavan at Breffni Park the following weekend.

The crucial opening round duel against Derry is very much the key fixture in the shortened league schedule and the only negative at the moment is the absence of regular defender Barry O’Farrell who is ruled out after surgery on a recurring wrist injury.

Former Donegal and Fermanagh manager Rory Gallagher is the Derry boss and a packed defence is generally his strategy.

Having said that, his side showed a lot more adventure  in clocking up the impressive total of 2-14 when they beat Longford by the wide margin of eight points in the Division 3 game at Celtic Park last October.

When the counties previously clashed in the National League at Glennon Brothers Pearse Park three years ago, the home side cruised to a comfortable 1-13 to 1-6 victory.

On that occasion Derry were without the Slaughtneil players who were preparing for the All-Ireland Club SFC semi-final against Cork opponents Nemo Rangers, most notably defender Chris McKaigue and attacker Shane McGuigan.

Longford comfortably consolidated their Division 3 status last season with wins over Louth, Leitrim and Tipperary and a draw against Offaly and are capable of featuring in the race for promotion this year.

It’s a more difficult route in the current campaign, starting against a Derry side who have underachieved so often in the past but there is no doubting their general quality.

Conor Glass, who has returned home after the experience of his Australian football career, is a highly rated player who was introduced in the second half of the league game against Longford last season.

It is hard to predict what is going to happen on Saturday after the long lay-off due to the coronavirus but few can argue with the fact that the midlanders will probably need to be at their best to shoot Derry down in a difficult battle.