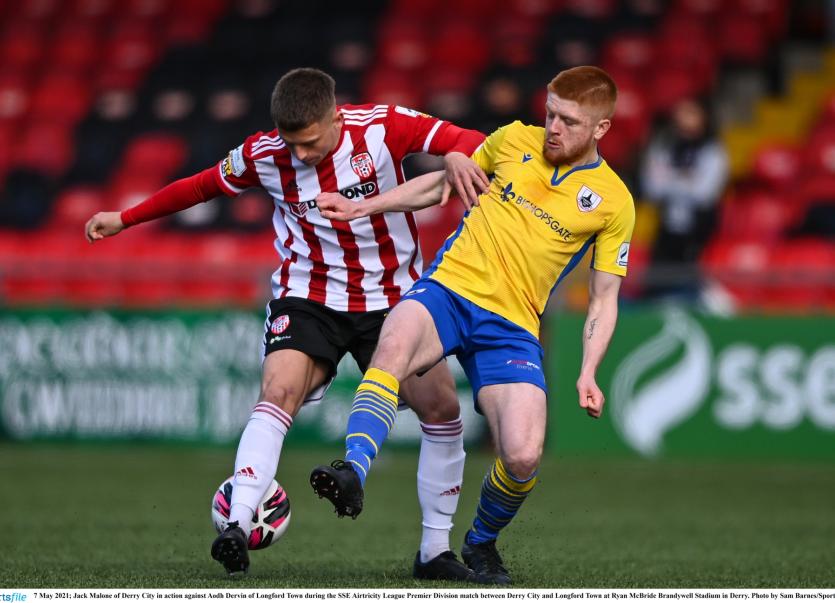 For the second game in a row, Longford Town threw away a lead as Derry City salvaged a draw against them in the last minute of stoppage time in their SSE Airtricity League Premier Division clash at the Ryan McBride Brandywell Stadium on Friday evening.

Against the run of play Town had taken the lead in the 74th minute; Dean Zambra played a good ball into Rob Manley, he did well to hold off his marker before shooting to the net.

Derry tried to get back on level terms and in the first minute of stoppage time Town keeper Mick Kelly pulled off an excellent save to deny sub Patrick Ferry.

With time almost up James Akintunde shot through a crowded box to give Derry a point.

On the balance of play the home side deserved the point but Town will feel it’s two points dropped, with victory so close.

It was a poor and scrappy first half. Derry City had the better of the chances. With just four minutes gone on the clock Eoin Toal forced Town keeper Mick Kelly to tip his header over the bar. 10 minutes later and Toal came close again to breaking the deadlock but his header was cleared off the line by Dean Zambra.

Town slowly began to get into the game but their touch and passing let them down and they didn’t create too much. Their first chance came in the 29th minute when Shane Elworthy’s pinpoint cross met the head of Aaron Robinson but his weak effort was straight at Derry netminder Nathan Gartside.

Down the other end James Akintunde should’ve done better with his effort in the 31st minute and in the 40th minute David Parkhouse’s low drive just went narrowly wide.

It was Parkhouse who tested the reflexes of Kelly within the opening minute of the second half. The home side continued to dominate while the Town didn’t do much to test Gartside.

Another Parkhouse effort was saved in the 54th minute by Kelly as they went in search of the opening goal. In the 66th minute Derry had claims for a penalty waved away when Akintunde went down on the box.

In the 74th minute Town took the lead but didn’t look like adding to it. They were made defend as Derry battled hard for an equaliser and it came just right at the end.