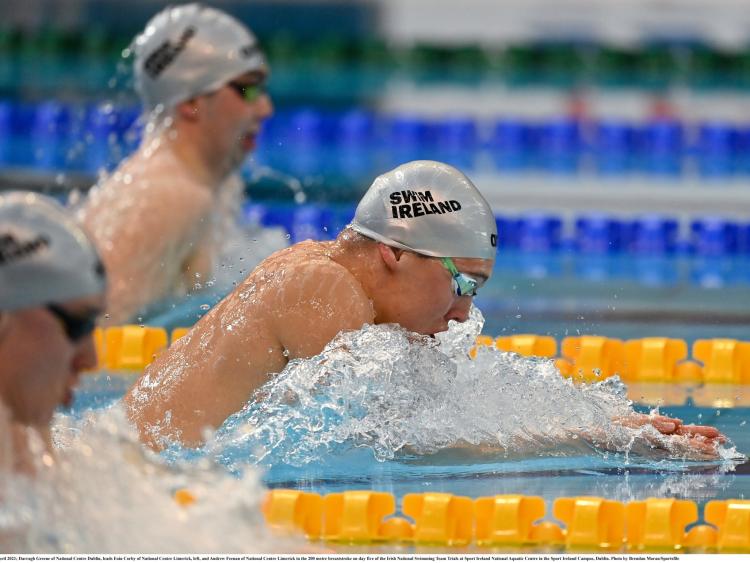 Darragh Greene on his way to winning the 200m Breaststroke final on Day 5 of the Swim Ireland National Team Trials at the National Aquatic Centre on Saturday evening Photo: Brendan Moran/Sportsfile

Swim Ireland National Team Trials came to a conclusion at the National Aquatic Centre in Dublin this Saturday evening and there was another first for Longford’s Darragh Greene.

In the Men’s 200m Breaststroke Final, Darragh took the win in 2:10.40 in an epic race with Eoin Corby. Greene (National Centre Dublin) who has already been under the Olympic Consideration Time (OCT) of 2:10.35, touched in 2:10.40 as Corby came agonisingly close, finishing second in 2:10.50.

19-year-old Corby who swims at National Centre Limerick, needs to make up .15 between now and the next qualification opportunity in June in order to qualify for the Olympics Games.

“To have five FINA 'A' Olympic Qualifying times achieved at this stage from four athletes is a good place to be at this time, with two stages of our Olympic nomination process still to come.

“There have been some agonising near misses across the five days and those fine margins are the very essence of performance sport. Twelve Irish Senior Records have also been broken this week, another indicator that the nation continues to evolve.”

“We set stiff consideration standards for our relays to compete at the forthcoming European Championships in Budapest (in an attempt to qualify for the Olympic Games) and we now have five such relays that can be considered for selection to this event.

“There were 10 athletes over the course of the week that were close enough to the FINA 'A' time for them to go again in a final qualification attempt in June and we are already working on what this may look like in a challenging COVID environment.”

“I am delighted that the event itself has run so successfully in such highly demanding and difficult times. Athletes and coaches have not had it easy over the last 13 months and the performances this week are testament to their resilience and their dedication. The job is not yet done for Tokyo - but the foundations are set".

Next up for Irish swimmers will be the European Swimming Championships in Budapest, Hungary from May 17th – 23rd.