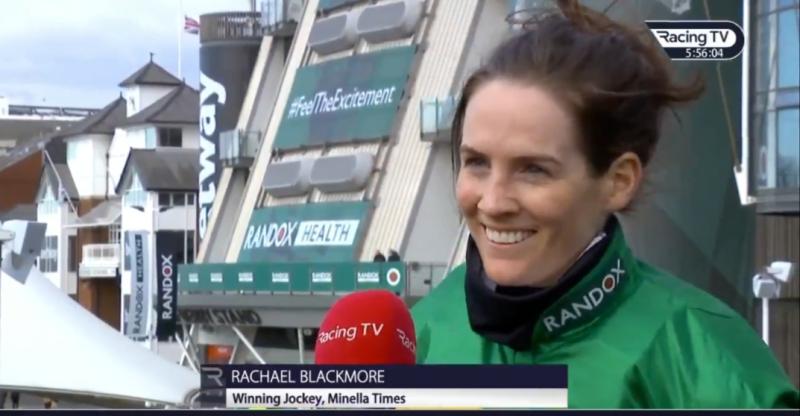 "I don't feel male or female right now. I don't feel human. This is just unbelievable," was Killenaule jockey Rachael Blackmore's reaction to becoming the first woman to win the Aintree Grand National on Saturday.

"It's unbelievable," she added.

For Limerick racehorse owner JP McManus, it was his second success in the world's most famous race, the Randox Aintree Grand National.

History-making jockey Rachael Blackmore made sporting history by becoming the first female jockey to win the Grand National with victory on the McManus-owned Minella Times.

Minella Times was a second winner in the race for leading owner McManus following Don't Push It's triumph in 2010 and the leading owner also owned filled third spot with Any Second Now.

Forty runners lined up for the world's most famous jumps race which is run over the marathon distance of 4 miles 2 1/2 furlongs and carries a first prize of stg£375,000.

Any Second Now was third, with Burrows Saint fourth.

The 173rd running of the famous race provided a story for the ages as Blackmore won in the green and gold hoop colours of McManus.

Shane said: "It’s great to win it in these colours, too. It’s always a privilege to ride for JP McManus and to win it for him is unbelievable. They’ve had a tough year so hopefully this can make things a little easier."

Blackmore had already achieved a landmark success at last month's Cheltenham Festival when becoming the first woman to be the meeting's leading jockey.

She demonstrated perfect poise and timing to guide Minella Times expertly round the 30 fences over more than four and a quarter miles for victory by six and a half lengths.

There were no spectators at the Merseyside track because of Covid-19 protocols, but the historic moment was not lost on the jockeys, trainers and owners in attendance who cheered the pair back into the winner's enclosure.

Check out the videos below:

"This is the Aintree Grand National & I cannot believe we have won."@rachaelblackmor - history-maker who reflects on a glorious success in the £750,000 Randox Grand National @AintreeRaces pic.twitter.com/8C7o54Sus8