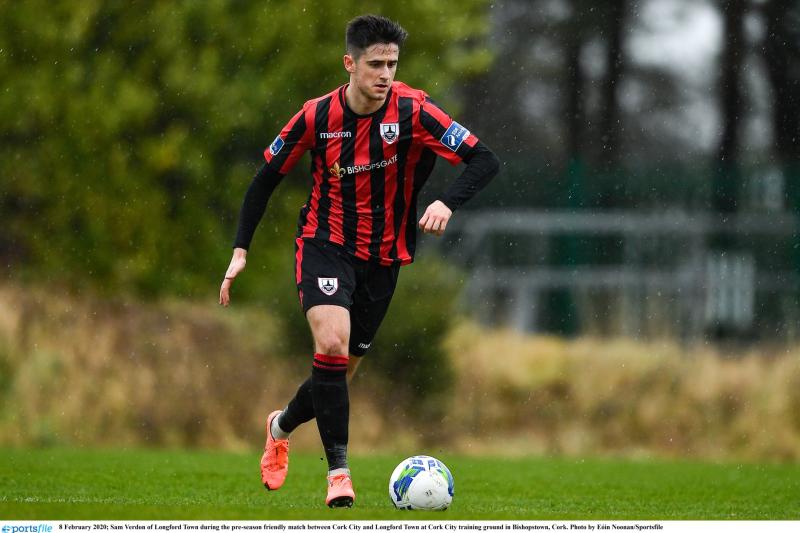 Sam Verdon impressed when he came in off the bench during Longford Town’s 2-1 defeat at the hands of Galway United in a friendly at Bishopsgate on Saturday Picture: Eóin Noonan/Sportsfile

Longford Town take on midland rivals Athlone in another pre-season friendly fixture on Saturday next in the countdown to the start of the 2021 SSE Airtricity League Premier Division season the following weekend.

Athlone, like Longford, have been busy preparing for the big-kick-off and the Westmeath club have performed well in their pre-season fixtures under the guidance of local manager Adrian Carberry.

The Town played Galway United at Bishopsgate on Saturday evening last and suffered another friendly defeat on a 2-1 scoreline.

Watch: League of Ireland 'kick-off pass' is now on sale

Once again the Longford manager Daire Doyle availed of the opportunity to give his big squad game time in his quest to determine the first eleven for the visit of Derry City for the opening league fixture on Saturday week, March 20.

Newcomer Aaron O’Driscoll made his debut in the first half when he teamed up with Joe Gorman and Joe Manley in the centre of the defence.

Another of the new signings, Paddy Kirk, played on the left and the former Bohemians player looks like he will be in the team for the eagerly awaited game against Derry.

Aaron Bolger is another of the new faces in the Town colours this season and he showed great promise in the midfield sector against Galway.

Other new signings Aaron Robinson and Callum Thompson are looking good in the friendly fixtures and will also be pushing for a start in the season opener against Derry behind closed doors at Bishopsgate.

Aaron Dobbs, back for a second stint with Longford, is another contender for a place in the team that will start against Derry and Daire Doyle has plenty of options after strengthening the squad for the major task of playing in the Premier Division.

The first half of the game against Galway last weekend was a tight affair with the defences dominating and it was scoreless at the break.

The Town then introduced six substitutes at half-time with the Galway manager John Caulfield also making some changes in preparing his strong squad for a serious crack at winning the First Division title this season.

Like in the previous friendly fixtures against Cabinteely, Cobh and UCD, some slack defending saw Longford conceding soft goals with Galway breaking the deadlock at the start of the second half.

There appeared to be some uncertainty in the Town defence and the visitors scored a gift second goal 20 minutes later when striker Ruairi Keating finished the ball to the net when the danger should have been cleared.

After this setback the Town piled on the pressure and a few minutes later the home side were rewarded for their endeavour with a goal from Dean Byrne.

Sam Verdon, who came on for the second half, gave the Town a real boost up front in making it difficult for the strong Galway defence and he created the opportunity for Byrne to find the back of the net after weaving his way through.

Byrne went close again but his shot flew past the post and while the Town have now lost all four of the friendly fixtures played so far, those results hardly matter as Daire Doyle goes through the process of finding his strongest team.

Experienced goalkeeper Mkchael Slingermann has joined Athlone from Galway United and is a very good shot stopper with plenty of Premier Division experience.

When you add the names of Killian Cantwell, Scott Delaney, James Doona and Jack Watson to that list, the Athlone boss Adrian Carberry has assembled a decent squad who could do well in the First Division this season even with the presence of such big clubs as Cork City and Shelbourne who were relegated from the top flight.

These are very exciting times for the Longford Town players and supporters as the club make their return to the Premier Division despite the fact that the stern Covid restrictions will prevent the fans from attending the games for the foreseeable future.

Class act Cian from Ardagh, a student at Moyne Community School, is just 18 years old but still succeeded in coming through the heats to qualify for the semi-finals in the 800 metres event.

Young McPhillips missed out on a place in the 800m final but his performances reached a very high quality and we will be hearing a lot more about this outstanding athlete in the years to come.

Swimmer Darragh Greene and Nelvin Appiah in Athletics are two more locals doing us proud and the same must be said about Aodh Dervin who is a very talented soccer player who will be making his Premier Division debut with Longford Town this season.